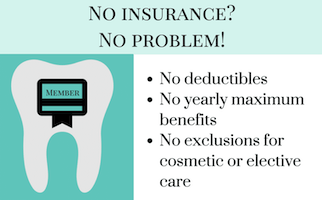 When my wife and I moved to Kentucky four years ago and started going to a new dentist, I was intrigued by the payment setup. We didn’t have dental insurance, so the dental practice suggested their annual membership plan.

For a flat fee, paid upfront, we would each get two regular appointments a year, along with related services such as fluoride treatments and x-rays. (When I had to make an extra appointment last year to deal with an unanticipated issue, that was covered by the membership plan too.)

According to the Kaiser Health Network, about a quarter of U.S. dentists now offer membership plans.

These in-office plans are largely targeted to the 65 million Americans who lack dental insurance and have to pay out-of-pocket for all their care. Dentists also like the plans better than handling insurance plans because they don’t have to deal with insurers’ heavily discounted reimbursement rates...and delays in getting their claims paid....

Patients pay the dental office typically $300 to $400 a year. In return, they receive certain preventive services at no charge and other procedures at a discount.

But the membership plans don’t have the annual deductibles or waiting periods that can make individually purchased dental insurance unattractive. Another deterrent to traditional insurance plans is their maximum benefit limits, usually $1,200 to $1,500 a year. In comparison, patients with memberships can use the discounts for unlimited treatment.

Before coming to Kentucky, we lived in North Carolina. My doctor (but not my dentist) had a similar membership plan for the uninsured — pay a flat fee upfront in exchange for regular check-ups and other routine services. Since the practice didn’t incur the cost of dealing with insurance paperwork, it charged a lower overall price to those in the membership plan.

The "membership" approach is similar to "concierge medicine," also known as direct primary care (DPC). The main difference is that DPC medical practices limit their clientele exclusively to those paying an upfront fee.

Although the cost of direct primary care isn’t cheap, the benefits are substantial. From Forbes:

For a flat monthly fee, you get unlimited office and telehealth visits that last as long as you need, as well as direct care from a doctor without worrying about copays and other charges. You also gain access to your doctor’s direct phone line for medical questions and simple diagnostic and blood tests in their office. And if you have a major health problem, your doctor coordinates specialist referrals and/or hospital care as needed. With concierge medicine, there’s no insurance or corporate health system interference — just doctors and patients.

The concierge concept is appealing for both primary care physicians and their patients, says Sequita Richardson, M.D., a family medicine physician at Encompass Medical Group in Kansas City, Missouri. "Doctors get frustrated with government restraints and insurance. There are administrative burdens, so people are burnt out and unhappy. Primary care on demand sounds attractive because you can get back to doing what you love to do," she says.

Concierge medicine has been popular among wealthy patients for several years. But WebMD reports that with many practices now offering a range of pricing options, the appeal is growing broader.

Costs for concierge medical service range widely, and services vary according to cost. Patients often pay a monthly retainer fee, and the annual costs can range from $1,500 for more basic care to $20,000 a year for more specialized services....

If you can afford to pay the monthly fee, there are a few benefits to concierge medicine you may not be able to find with a primary care physician in your insurance network. One of the most popular reasons to consider a concierge doctor is quicker access to your physician. Same-day appointments and direct email and phone contact with your concierge doctor mean speedier access to care. Because concierge doctors can cap the number of patients they take on, they’re often better able to control their availability.

Services you’d normally get in a primary care visit, like physicals and preventive screenings, are already covered by the fee you pay for concierge service, so you won’t have to cover costs for each individual visit. For those with conditions like heart disease that require frequent visits, a concierge doctor could be more cost-effective in the long run.

Is it worth it?

After four years, we still like our dental-membership plan and have no complaints. There hasn’t even been a price increase!

As for medical care, we considered changing over to a concierge medical practice a couple of years ago — mainly because it’s increasingly difficult to get a timely appointment with a doctor! I spoke with someone at a local concierge practice about their pricing and services, but my wife and I decided not to switch. At the time, we weren’t able to justify the higher cost. However, now that price options for direct primary care seem to be getting more favorable, we’ll give it a second look.

What about you? Do you have a dental (or medical) membership plan? Have you switched over to direct primary care?

Tell us about your experience — positive or negative — in the comments section below.

Finding the Right Prescription: How to Save on Medications