The Fed formally kicked off its tightening initiative last week with a relatively modest hike of 0.25% to the Fed Funds rate. The stock market has moved forcefully higher since then (although it finally sold off a bit today while I was writing this).

I'd suggest the stock market's reaction (moving higher) reflects a fundamental misunderstanding of what the Fed intends and how they intend to accomplish it.

Trying to get a handle on the various dynamics around inflation, interest rates, the strength of the economy — and how all those of variables impact Fed policy — can be tricky. Let's try to break this down.

The Fed takes action for a number of different reasons. For example, when they were hiking interest rates and shrinking their balance sheet by selling bonds in 2017/18, it wasn't because inflation was a problem or that the economy was too strong. It was because they wanted to "normalize policy" and give themselves future ammunition to deal with the next crisis, whenever it came along. In the process, they hiked the Fed Funds rate to 2.5% and reduced the size of their balance sheet by about $800 billion...and eventually broke the stock market, which plummeted -20% in December of 2018 (resulting in the "Powell Pivot" of January 2019).

This time around, the situation is totally different. Inflation is raging and is clearly the target of Fed action. Despite Fed Chairman Powell's happy economic talk last Wednesday (he used the word "strong" in reference to the economy ~40 times in his comments), I don't think the Fed policymakers actually believe it. The economy certainly isn't bad at this point, but they're smart people, and it's not hard to see that U.S. GDP has gone from growing at a 7% annualized rate in the 4th quarter of last year to 0% in the 1st quarter this year. Meanwhile, the University of Michigan consumer sentiment survey hit a decade-long low this month, while the share of respondents expecting worse personal finances a year ahead was the largest since the survey began in the mid-1940s. So there seems to be a bit of whistling past the graveyard on the Fed's part here.

The Fed's dual mandate is to control prices while promoting full employment. If the economy is okay but not great (we still haven't recovered all the jobs lost in the pandemic two years ago), the Fed will need to be careful about doing anything that significantly hurts the real economy. Interest rate hikes tend to have "real world" implications, as the cost of financing is a real thing, especially for smaller businesses that often find it difficult to borrow. Given that small businesses employ tons of workers, that's a real concern.

Interest rate hikes aren't the only tool in the Fed's toolbox. Recall what they did in response to the Financial Crisis: first, they dropped rates to zero, then they embarked on multiple QE (Quantitative Easing) programs in an effort to boost asset prices and create a "wealth effect." With rates already near zero, there was relatively little they could do for the "real economy" to stimulate growth directly. So they used QE to boost asset prices so that the people who owned those assets would feel wealthier and spend more, thus boosting the economy indirectly.

After a dozen years of watching prices of virtually every type of financial asset soar (stocks, bonds, real estate, etc.), it's safe to say this approach was pretty successful. Misguided perhaps, but effective.

Today, the Fed finds itself with the opposite problem. How can they bring down runaway inflation without directly hurting the economy and costing jobs?

By reversing the wealth effect.

Here's where you come in. You see, you're the target of the Fed's new campaign!

The goal of Fed policy over the past dozen years has been to make you wealthier by boosting the value of those assets.

The new goal of Fed policy since last Wednesday is now the opposite — reverse the wealth effect by bringing down asset prices. Gently, of course — no one wants to create a panic!

The Fed is shooting for the proverbial "soft landing" by which they drain just enough of the wealth effect so as to bring inflation down without causing growth to slow so much that the economy tips into a recession and employment takes a hit...

Yeah, I'm not optimistic about their chances either. The unfortunate reality is that soft landings are the exception, rather than the rule. Instead, the Fed normally tightens policy until something breaks, then reverses course when the damage is obvious.

The market's perplexing reaction (so far)

My interpretation is that the Fed is no longer supporting the market but specifically targeting it. If I'm right (and it's certainly possible I'm not), this isn't a case of the Fed tightening and maybe the stock market will be affected and maybe it won't. Rather, this time around I expect the Fed will tighten until the market is affected and they get the outcome they're targeting, which is lower asset prices.

If this is the correct interpretation, the parade of Fed speakers this week — and their increasingly hawkish messages — makes perfect sense. On Monday, Powell upped the hawkishness from his comments last Wednesday, saying there was nothing that would keep the Fed from hiking 0.5% next month (and the month after) if necessary. St. Louis Fed President Bullard doubled down on that theme yesterday, saying "faster is better" and they should be targeting a 3% Fed Funds rate by the end of this year. Remember, 2.5% was enough to break the market in 2018.

I suspect this is mostly tough talk because, again, I don't think they actually believe the real economy can handle that degree of hiking without causing a recession. What's more interesting to me is the background noise regarding the pace of reducing the Fed's balance sheet of bond holdings. The Fed failed to outline this specifically last week (which the stock market seemed to take as a positive sign), but reading between the lines of the few direct comments Powell has made on the subject, it looks as if the Fed may be targeting a roughly $1 trillion reduction each year for the next few years. That would be roughly twice the speed of the 2017-18 Quantitative Tightening (which ultimately resulted in the -20% drop in the stock market in Dec 2018).

Misery has many faces

A lot of this is admittedly open to interpretation and debate. Less open for debate is that something needs to be done and the political calendar requires it to happen sooner than later. There aren't many better ways to get run out of office than to let the "Misery Index" (inflation rate + unemployment rate) ramp higher into an election, which is exactly what is happening right now. 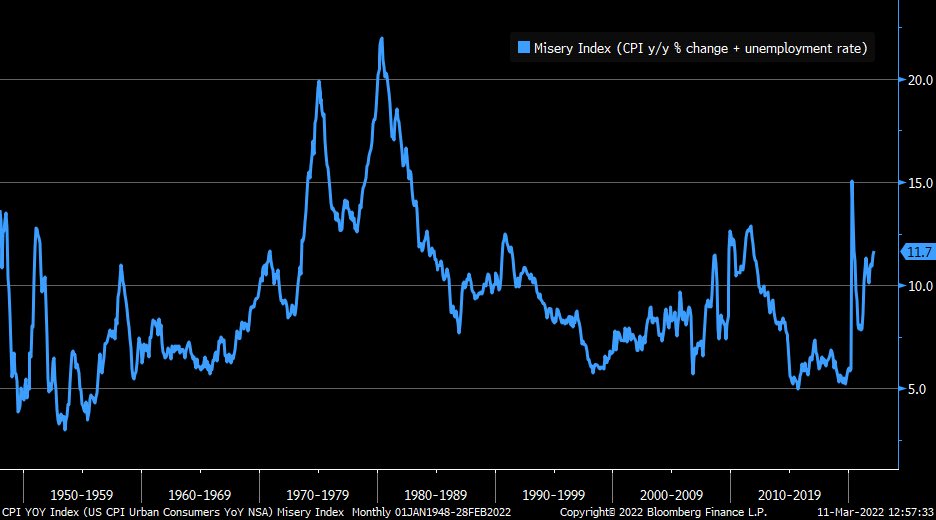 A lot of people have been surprised that the unprecedented fiscal/monetary actions taken to combat the COVID lockdowns two years ago didn't cause more immediate problems. It almost felt like the most extreme economic event of our lifetimes happened and — BLAM! — the central banks and governments hit it with both barrels and...life went back to something resembling normal pretty quickly. The stock market doubled and most people muddled through without much negative impact (there were obviously exceptions to this, but broadly speaking). How could such a massive disruption — and response — not create more of an economic impact?

I think we're starting to see the rest of the story unfold now. Those economic and market interventions may have deferred a good part of the COVID economic shock, but it hasn't been totally avoided. As we deal with the inflation that resulted from those policies, it's likely that both the economy and markets will have to revisit some of the downside that was postponed initially.

Of course, I could be wrong. Or events moving forward could change the trajectory we're on. In either case, we're always aware that "the market can stay irrational longer than you can stay solvent." SMI has trend-following safeguards that will force us to respect the market telling us that we're wrong, should it come to that. If we run afoul of those, we'll start adding to our stock market exposure and rotating sectors, etc. as appropriate.

I don't expect that, but it's comforting to know those guardrails are in place.