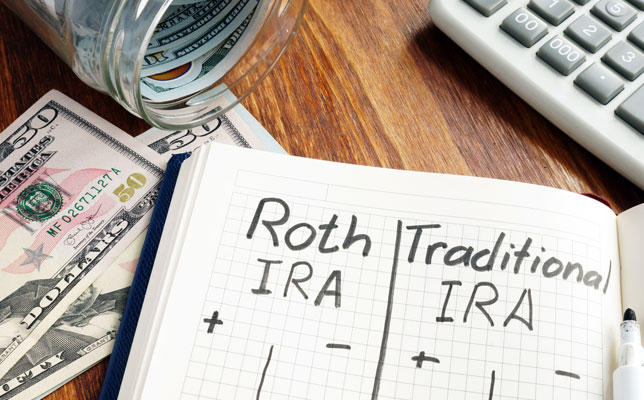 Retirement savers face two initial decisions. First is the choice of a retirement-savings plan, with the two most common options being a workplace plan — such as a 401(k) or 403(b) — or an individual retirement account (IRA). The second decision is the choice between making contributions on a “traditional” (pre-tax) basis, or a “Roth” (after-tax) basis. This second decision is the focus of this article.

As Making Sense of Your IRA Options explains, the primary difference between traditional and Roth tax treatment is one of timing. If you prefer to pay the taxes now, you can opt for Roth treatment — contributing already-taxed dollars now and never paying tax in the future on any earnings. If you prefer to pay the taxes later, you can opt for traditional IRA/401(k) treatment — this provides you with a tax benefit today (dollars contributed reduce your taxable income now), but you will pay tax on all withdrawals in the future.

Because of its “pay me now or pay me later” nature, much of the decision between these two options boils down to an educated guess as to how your future tax rate will compare to your current one.

The problem, of course, is that none of us has any idea what tax rates will look like in the future! This complicates the decision-making process. Still, thinking through the answers to a few questions about your personal financial situation can help you make a reasonably informed decision.

Unfortunately, this “future tax rates” question isn’t as simple as it first appears. That’s because with traditional contributions, the tax dollars you save now are coming off the “top” of your income, i.e., at your highest marginal tax rate. But when you retire and start withdrawing money from your IRA, unless you have significant other income sources (which most retirees don’t), your withdrawals won’t immediately be taxed at the highest tax rates. Instead, they will start filling in the tax brackets from the bottom up. 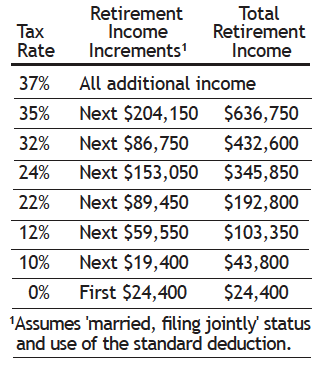 Consider the table on the right, which shows the tax rates applied to retiree income. (Read table from the bottom up.) It shows that most retired married-filing-jointly couples who take the standard deduction would pay zero tax on their first $24,400 of income, then would pay only 10% on their next $19,400, and so on.

What the table illustrates is that, while someone may end up, for example, with a marginal (highest) tax rate of 22% in retirement, their first $103,350 of retirement income would be taxed at significantly lower rates than that.

Many of today’s workers expect to have only two sources of income in retirement: Social Security and their own savings. Even if Social Security continues to provide benefits similar to today’s, this table shows that the tax rates applied to much of the money that will be withdrawn from retirement plans in the future will likely be relatively low.

For many workers, this is a strong argument in favor of using traditional 401(k)s and IRAs rather than Roths. Traditional tax treatment allows you to take your tax deduction today at your highest tax rate while you’re working, then likely pay tax at lower average rates in retirement when you’re not, due to this “filling in from the bottom” effect of the progressive tax brackets. Roth treatment, in contrast, turns this on its head, causing you to pay tax now at a higher rate, while saving you less tax later on any income used to fill in the lower tax brackets.

The case for traditional 401(k)s/IRAs is even stronger if you live in a high-income-tax state. You’ll save several extra percent in taxes now (whatever your state tax rate is). At worst, you’ll pay a similarly high state tax when you take the money out in retirement. But at best, you may pay much less if you retire in a low- or no-tax state (such as Florida or Texas) — or you may live in such a state at some point in your life, providing an excellent opportunity to convert to Roth treatment at a lower overall tax rate.

There’s a final significant benefit to traditional contributions rather than Roth: they lower your current income for tax purposes. There are many benefits in the tax code that are phased out or you become ineligible for as your income rises. Deducting your 401(k)/IRA contributions helps keep that from happening.

So should everyone choose traditional tax treatment instead of Roth? No. But we do think the playing field is more level than some Roth enthusiasts seem to believe.

Some people are quite likely to benefit from Roth treatment. As noted earlier, super savers who contribute the maximum allowed to their 401(k) and/or IRAs each year have a strong incentive to use the Roth options. Those who suspect they will have enough income to fill in the lower tax brackets in retirement will likely also benefit from Roths. And finally, anyone who is likely to see significantly higher pay in the future than they earn now should favor the Roth. If you can pay tax today at relatively low rates, it probably makes sense to do so, especially if you think your tax rate may be higher in retirement. This is why we typically encourage young people to use Roth IRAs and Roth 401(k)s.

While some people will come down clearly on one side of the Roth/traditional divide, for many others it’s unclear which approach is best, even after working through this information. That’s okay — it doesn’t need to be an “either/or” issue. Over the years, SMI has increasingly embraced the idea of “tax diversification.” No one knows what taxes will look like a decade or two from now, so we think having a blend of account types may help future retirees navigate whatever tax situations they face in the future.

Even if the tax landscape doesn’t change much, having traditional accounts you can draw from in retirement to fill in those lower tax brackets is a positive thing, while having Roth accounts to supplement your income tax-free will also be welcome. Because the Roth 401(k) doesn’t enjoy all the benefits of the Roth IRA (see Roth IRAs and Roth 401(k)s: Similar, Yet Different), if you are going to mix Roth and traditional account types, our recommendation is to favor Roth IRAs and traditional 401(k) contributions (rather than vice versa).

There’s no question that adding the Roth options to the IRA and 401(k) discussions in recent decades has complicated things. But it’s a great problem to have. These new tools present powerful new opportunities for those investors diligent enough to take advantage of them.

Making Sense of Your IRA Options