Home > Articles >How Accurate Are the Government’s Inflation Numbers?

How Accurate Are the Government’s Inflation Numbers?

This week, the government's Bureau of Labor Statistics released its monthly update (PDF) of the Consumer Price Index (CPI), a measure that tracks increases in the cost of living.

The "CPI measures inflation as experienced by consumers in their day-to-day living expenses," the Bureau says on its website.

However, the CPI's ability to gauge inflation is limited at best. At worst, the CPI is misleading because it understates increases in certain types of expenses.

Further, lifestyle choices and location play a big role in one's spending. The items/prices the CPI measures may or may not be representative of the items you buy and the prices you pay.

Princeton economist Oskar Morgenstern wrote about problems with measures such as the CPI more than 70 years ago in his book On the Accuracy of Economic Observations:

The temptation to take index numbers, whether of prices, production, or anything else, at face value is, of course, enormous. How can it be that a number that has been ground out after so many steps, operations, computations, etc., all based on a great deal of theory, should not be correct and free from error...?

But the idea that as complex a phenomenon as the change in a "price level," itself a heroic theoretical abstraction, could...be measured with [great] accuracy is nevertheless simply absurd. So are the "inferences" that the country undergoes inflation or the reverse, as the case may be.

His argument is not that the Consumer Price Index and similar economic measures are useless, but that, given the challenges of accurately measuring complex things, we shouldn't assume these sets of data tell us more than they really do — or assume they gauge inflation in a comprehensive way.

One easily identifiable reason to take the CPI with a grain of salt is the way it estimates housing costs.

The housing measure is "Rent" or (for homeowners) "Owners' Equivalent Rent (OER)" — i.e., what an owner-occupied house would rent for. The CPI does not include "spending to purchase and improve houses" because the Bureau of Labor Statistics deems such spending to be "investment and not consumption."

The problem with that methodology, of course, is that rents aren't rising nearly as fast as housing prices. As blogger Mike "Mish" Shedlock noted last week at TheStreet (before this month's CPI numbers came out):

Year-over-year, the CPI is only up 1.4%. The OER is up 2.0%, but the Case-Shiller National Home Price Index (December) is up a whopping 10.3%. If we substitute actual home prices for OER in the CPI (as the CPI used to be calculated), the next chart shows what the CPI would look like. I call the substitution Case-Shiller CPI (CS-CPI).

Here is the chart. 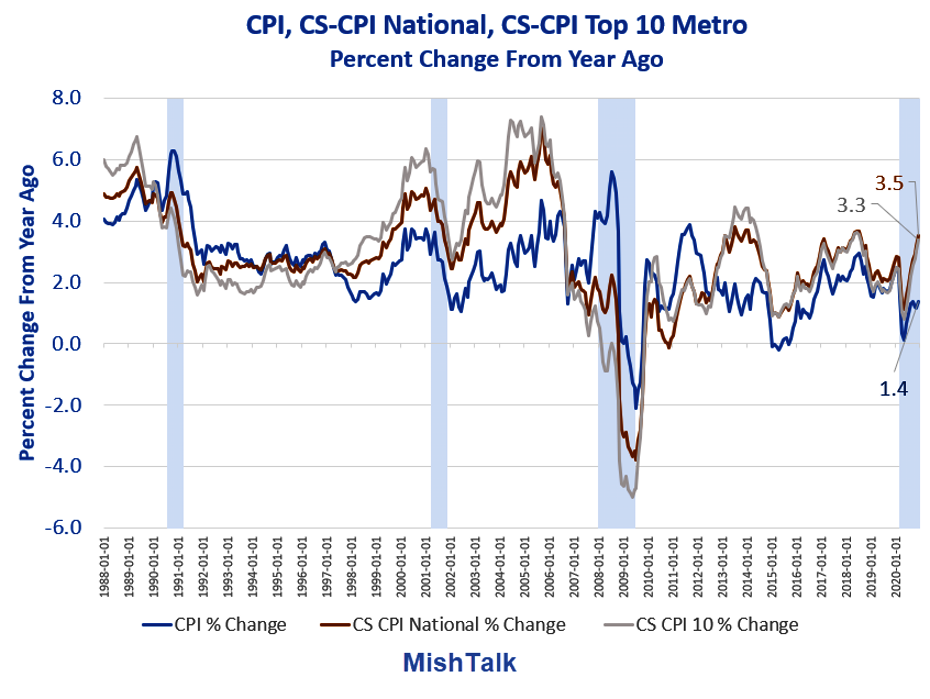 As you can see, adjusting the CPI calculation this way suggests that inflation is running significantly higher than the official numbers indicate.

We bring all this up to point out that the official CPI, while helpful in showing a trend, doesn't capture all of the price inflation that is occurring.

Although Fed Chairman Jerome Powell and other officials insist that current inflationary signs are a temporary result of massive government stimulus and the economy's post-COVID "re-boot," there's no way to know that for certain. Once unleashed, inflation is difficult to control. And even small increases in the cost of living, compounded over time, can make a big difference in one's long-term financial picture.

In the next issue of SMI, our cover article will be on investing with inflation in mind. We're not making predictions. We just want you to be aware of the signs of inflation that are at hand and to learn more about the types of investment options that can help you stay ahead of inflation.