After spending the first quarter of 2018 worrying about the return of inflation and volatility, investors found a new concern to obsess over in the second quarter: the possibility of a global trade war.

But unlike February, when the stock market responded to those earlier investor concerns with its first -10% correction in two years, stocks largely shrugged off these new worries and moved higher in the second quarter, with the Wilshire 5000 index gaining +3.8%. Volatility has retreated back to historically low levels and from all appearances, the bull market seems to be back on the march.

Both JtB and Stock Upgrading posted solid gains during the quarter. JtB gained +3.1%, slightly less than the U.S. market, due to poor performance from its foreign component, which lost -3.3% during the quarter. (Performance updates of all SMI strategies are available by clicking on the Performance tab of the SMI homepage each month.) 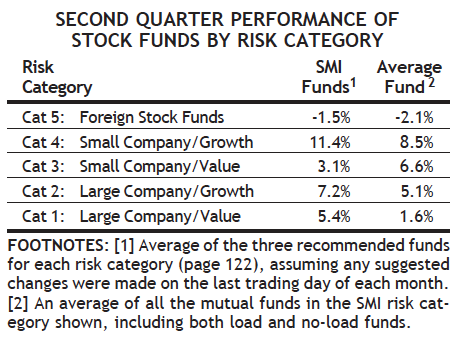 In contrast, Upgrading was the star of the quarter, gaining a robust +5.1%, well ahead of the market’s +3.8% gain. Like JtB, Upgrading also lost money on its foreign holdings, but only about half as much, and strong gains from both small- and large-growth stocks more than offset those declines.

As the table shows, the Upgrading process improved on the average fund’s performance in four of the five risk categories during the quarter.

While concerns persist regarding stock valuations and the age of this bull market, investors are being treated to typically strong late-cycle gains in the meantime. Despite the first quarter’s correction, the market is still up a very strong +14.7% over the past 12 months, while Stock Upgrading’s gain of +15.2% has been even better.

Much as the stock market endured a test of its longer-term trend during the first quarter, with the S&P 500 index dropping to its 200-day moving average before rebounding higher, bonds endured a similar test during the second quarter. The benchmark 10-year Treasury yield pierced the 3% yield level in March and continued rising as high as 3.11% by mid-May. (Remember, when bond yields rise, bond prices fall.) Many bond-market watchers were holding their breath at those levels, as a further rise would have clearly broken the 36-year declining trend line in interest rates. But bond yields retreated, with the 10-year Treasury dropping back to 2.85% by the end of the quarter.

Overall, both short- and long-term yields moved higher in the second quarter, putting pressure on bond returns. The previously mentioned 10-year Treasury yield started the quarter at 2.74% and ended it at 2.85%, while the Federal Reserve hiked its short-term rate once again in June to 1.75%-2.00%.

But while most bond investments lost ground (the Barclays US Bond Index fell -0.2%), Bond Upgrading managed to buck the trend and gain +0.4%. This was primarily due to its Upgrading holding, which has been the best performing bond fund in our universe both during the second quarter and year-to-date. (This fund is also the only bond fund in our Bond Upgrading universe with a positive return over the past six months, as of this writing in mid-July).

The first quarter’s biggest loser, Real Estate, rebounded sharply to become the second quarter’s biggest winner. Bonds lost ground for a second consecutive quarter, but DAA avoided those losses by not having them in the portfolio. 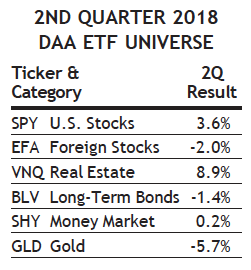 Despite the somewhat disappointing quarterly return, DAA continued to fulfill its role as a portfolio diversifier. While most of SMI’s strategies were strongest in May and weakest in June, DAA was the opposite. That +1.0% June gain helped level out the performance of blended strategy portfolios, given that Upgrading and JtB were barely positive and Sector Rotation lost -9.1% in June.

So even as DAA has struggled to keep up with the bull market’s strong recent returns, it is still providing a diversification benefit within SMI portfolios. And of course, its value will be most evident when the market cycle finally shifts and stocks turn lower.

It feels ungrateful to complain about SR’s modest loss of -2.1% during the second quarter when the strategy still shows a +46.5% gain over the past 12 months. But it’s true that SR was the laggard among SMI strategies this quarter, which hasn’t happened often in recent years. SR portfolios have more than tripled in value over the past five years, which helps us to be patient when the strategy goes through periods of volatility as it has so far in 2018. It’s still up solidly year-to-date for 2018 and has posted strong gains again in early July.

So we continue to just reiterate our cautions about the volatility associated with this particular strategy, while acknowledging that its long-term results have been outstanding for those willing to tune out the short-term noise and stick with it.

This portfolio refers to the specific blend of SMI strategies — 50% DAA, 40% Upgrading, 10% Sector Rotation — discussed in our April 2018 cover article, Higher Returns With Less Risk, Re-Examined. It’s a great example of the type of diversified portfolio we encourage most SMI readers to consider. (Blending multiple strategies adds complexity. Some members may want to use an automated approach.)

As we’ve seen repeatedly in recent years, the markets can shift suddenly between rewarding risk-taking and punishing it, so a blend of higher-risk and lower-risk strategies can help smooth your long-term path and promote the type of emotional stability that breeds sustained investing success.

A 50/40/10 portfolio gained +2.4% during the second quarter, a bit less than the broad market’s gain of +3.8%. Stock Upgrading was great, but the rare down quarter for SR coupled with DAA lagging the market a bit brought the overall return down. That said, it’s worth pointing out that 50-40-10 investors have earned almost as much as the broad market over the past year (+14.2% vs +14.7%), despite having significant downside protection present via the 50% allocation to the defensively-oriented DAA strategy.

The ability of 50-40-10 to keep pace during this powerful bull-market cycle means that if DAA’s defensive properties pay off the way we expect during the next bear market, the performance of a 50-40-10 portfolio over the full market cycle (bull and bear market) should be significantly better than the broad market. Whether you’re using this specific 50/40/10 strategy mix or a different combination, we think most SMI readers can benefit from blending these strategies in some fashion.