The parallels between the current stock market and that of the late-1990s dot-com era grew stronger as 2017 unfolded.

In both cases, the gains from an aged bull market continued to be strong as global economic growth accelerated. In both cases, stock valuations were pushed to historical extremes as all-time market highs occurred on a seemingly weekly basis (roughly one-fourth of 2017’s trading days ended at a new all-time high!). In both cases, the stock market was led higher by a relatively narrow group of tech superstars (Apple, Amazon, and Facebook each gained more than 50% in 2017).

And in both cases, things started getting a little nutty as normal businesses would see their stock prices soar higher on news of them simply being connected to the investing mania of the day: adding a “dot-com” to the company name in the 1990s, vs. expressing any interest in blockchain and cryptocurrency technology today!

The million-dollar question as we start 2018 is whether the current market more closely resembles 1998 (with a couple of more years of big gains still ahead) or 2000 (with a bear market soon to come). Strong cases can be made for both. SMI’s approach is to largely ignore the predictions and continue riding our momentum-based models higher until the trend changes. At that point, we’ll be reliant on the safety mechanisms already built into the SMI strategies to help us avoid some of the downside pain.

As notable as 2017 was for the outstanding gains it produced for equity investors, it was also noteworthy for an unusual lack of volatility. On a total-return basis, the S&P 500 index was positive every month in 2017, running its streak to 14 months (a record). As of this writing in mid-January, the index was within days of setting a new record for the longest stretch without experiencing a 5% decline. It truly has been a one-way trip higher for equity investors lately.

While caution is warranted, those with the discipline to stay invested in this (seemingly) late-stage bull market have been richly rewarded. All of SMI’s equity-focused model portfolios ended 2017 at or near new all-time highs, reinforcing SMI’s standard advice to tune out the noise and stick with your long-term plan. 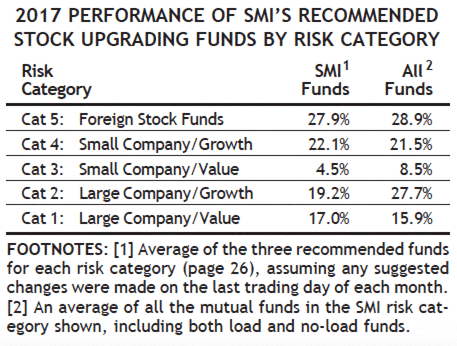 Foreign stocks contributed to the success of both strategies, as global markets outpaced the U.S. for the first time since 2012. Growth stocks strongly outpaced value, and large-company stocks outperformed smaller ones.

Overall, foreign and large/growth were the market’s strongest categories, a marked reversal from 2016 when those were the two worst performers.

The bond story was a bit more nuanced in 2017. Stronger economic growth reinforced a growing confidence by the Federal Reserve in the resilience of the U.S. economy, lending support for three interest-rate hikes. This pushed the short-term “Fed Funds rate” above 1% for the first time since the depths of the financial crisis in September 2008. However, interest rates didn’t rise across the board. The benchmark 10-year Treasury yield started 2017 at 2.45%, spent much of the year below that level, and finished roughly unchanged at 2.40%.

Bond Upgrading saw modest returns of +2.3% for the year, which was less than our bond-market benchmark (Vanguard’s U.S. Bond Market index fund, which gained +3.5%). A large part of that was our avoiding the riskier long-term and high-yield (“junk”) portions of the bond market, both of which saw strong returns.

While this cost us a performance boost in 2017, at this late point in the credit cycle, we simply don’t think the risk/reward relationship warrants holding those types of securities in our Bond Upgrading portfolios now (particularly given that many SMI members already have exposure to long-term bonds via DAA). The fact that European junk bonds currently yield roughly the same as U.S. Treasuries just shows how out-of-whack some of these valuations have become, and we think there will be strong — and painful — repricing of this risk at some point. That’s not something we want in the most conservative part of our SMI-member portfolios.

DAA bounced back from uninspiring performance in 2016 to produce excellent returns of +16.0% in 2017. While this trailed the stock market’s overall return, we’re very pleased to have participated in the market’s gains to this degree. (Remember, DAA is never more than two-thirds invested in stocks.) This was DAA’s second-best annual return since the strategy was introduced in 2013. But in 2013, DAA gained +16.2% during a year when the stock market was up twice as much (+33.1%). DAA’s gain in 2016 was more impressive given the stock market’s more modest gain of +21.0%.

Being invested in both U.S. and foreign stocks the entire year was the key to DAA’s success. While that may seem basic, there are many people who likely would not have had the courage to be invested so heavily in stocks outside of a defensively-oriented system such as DAA. Knowing that DAA is designed to quickly respond to market downturns gave many investors the confidence to stay invested and enjoy 2017’s strong gains. 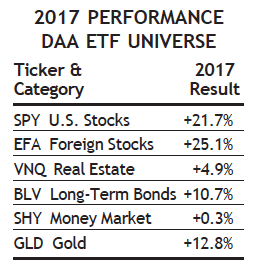 In light of last month’s announcement regarding the new protective Upgrading 2.0 protocol, several members have asked whether they still need DAA. Our answer to that is yes, for two reasons. First, DAA remains SMI’s best strategy for downside-risk protection. During the last bear market, Upgrading 2.0 would have fallen -17.4% whereas DAA would have lost only -1.4%. Secondly, as those results demonstrate, these two strategies manage risk differently.

Having some exposure to both approaches provides a degree of strategy diversification that is likely to be beneficial over time. As excited as we are about Upgrading 2.0, we still think maintaining exposure to DAA is wise, particularly given the possibility that we’re currently in the late stages of this long bull market.

That $31,000 gain would pay for an annual SMI Premium membership for the next 182 years — a pretty good value! 2018 marks SR’s 15th year as a live strategy, and its simplicity and consistency continue to amaze, just as they have since it was first launched back in 2003.

This portfolio refers to the specific blend of SMI strategies — 50% DAA, 40% Upgrading, 10% Sector Rotation — examined in detail in our May 2014 cover article, Higher Returns With Less Risk: The Best Combinations of SMI’s Most Popular Strategies. It’s a great example of the type of diversified portfolio we encourage most SMI readers to consider.

The markets can shift suddenly between rewarding risk-taking and punishing it, so a blend of higher-risk and lower-risk strategies can help smooth your long-term path. (Note: Blending multiple strategies does add complexity, so some members may prefer an automated approach.)

With all three of the component strategies posting excellent returns in 2017, it’s no surprise that the 50-40-10 portfolio also excelled with a gain of +20.9%. Given that 90% of this portfolio would be expected to vastly outperform an indexed portfolio during market downturns (due to the risk management built into both DAA and Upgrading 2.0), it’s amazing that it was able to nearly match a purely indexed portfolio during a year of such strong gains for stocks.

Gathering a large percentage of the market’s gains during rising markets while avoiding even a portion of its losses during falling markets is a recipe for superior long-term returns — plus it provides the type of emotional stability so important to sustained investing success.

06/01/14 | Comments
Indexing: The Loser’s Game That Can Make You a Winner
By Austin Pryor & Mark Biller

08/29/17 | Comments
Bitcoin and Cryptocurrencies: Are They a Passing Fad or the Future of Finance?
By Joseph Slife