Home > Articles >Where Do Stocks Go From Here?

Where Do Stocks Go From Here?

After bouncing back in early November, the stock market retested the October lows again this week. Here's your pre-Thanksgiving run-down of where things stand.

As this chart from Ritholtz Wealth shows, stocks are extremely expensive on a historical basis. Prices have been higher (relative to earnings) only at the peak of the late-90s Tech Bubble. 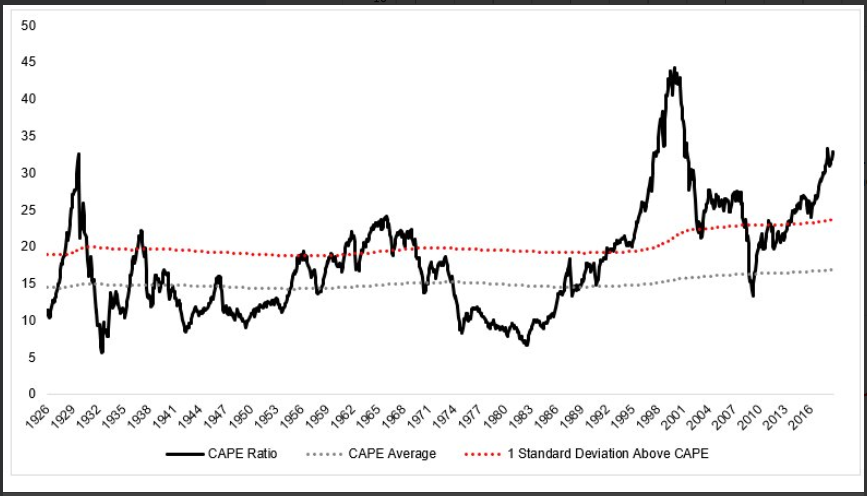 However, valuations have been high for at least a few years. The big change this year has been the amount of liquidity provided by the world's central banks. Led by the U.S. Fed, these banks are removing the excess liquidity of the past decade and trying to "normalize" interest rates while also trying to pare back their enormous balance sheets. The problem is, as economist David Rosenberg tweeted this morning, this liquidity has been the fuel for risk assets throughout this whole nine-year bull market. He went on to point out that the global monetary base has been contracting since March and is now falling at a -7% year-over-year rate.

Financial asset prices rose for years on a flood of central-bank issued liquidity, and now we're seeing prices decline as that liquidity is being taken away. This is no surprise — we've been talking about this being the eventual key to the end of this bull market for at least 5-6 years. The only surprise is that it's taken this long to arrive at this point.

The valuation problem isn't going away. This is the backdrop for the remainder of this bull market — as it has been for the past few years already. It likely will be resolved only by the next bear market taking a bite out of stock prices, making them appear more reasonable when compared to company earnings.

The liquidity issue is a bit of a different story though. That could actually change dramatically in the short-term — or at least the perception of it could — with a simple statement from a Fed bigwig saying they're planning to slow the pace of future interest rate hikes. Or absent that, the failure of an expected rate hike in December could accomplish the same thing. If either of those were to happen, equities likely would celebrate with a big move higher. It wouldn't get rid of the problem, as interest rates eventually would have to resume climbing and the assets on these central bank balance sheets removed. But it would kick the can out at least a few more months.

And that's why patience — that most valuable of all investor qualities — remains required at this point in the market cycle. The market's losses over the past seven weeks or so have been jarring, but not outside the scope of a "routine" market correction at this point: at their worst, the S&P 500 index (large stocks) down a little less than 10%, while the Russell 2000 index (small stocks) has been down about 15%. Remember, this would be the fourth such market correction in just over three years, and as with the prior three, the market could rebound from here and keeping chugging higher.

Long-term, the combination of these factors — high valuations and the worsening liquidity picture as interest rates rise — seem almost assured to combine and bring this long-running bull to a halt. But short-term? That process could already be underway — it's entirely possible we'll end up dating the end of the bull market (and the beginning of the bear) as this past September 20. Or stocks could certainly rally once more and push that off another several months or more. There's just no way to know at this point. Which is where that patience comes in!

Thankfully, we don't have to guess which way things will go, or exacty when. We can rely on the defensive measures built into our normal strategy processes to let us know when it's time to shift more money to safety. (I say "more" because our Dynamic Asset Allocation strategy began that process some months ago.) That process of our strategies getting more defensive could accelerate soon, or could delay a while longer.

I'm very thankful that we have such systems to help us navigate these tricky market trends! I'm also thankful for all of you — we so appreciate the opportunity to serve the SMI community doing what we do. Praying all of you have a wonderful Thanksgiving!

A Conversation About Gold (Video)...