Home > Articles >The Social Security Administration Made a Mistake

The Social Security Administration Made a Mistake 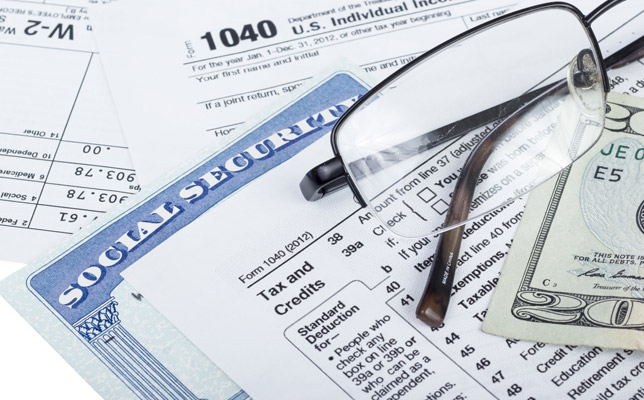 It's not surprising, of course, that the Social Security Administration would make a mistake. After all, Social Security is the federal government's largest spending program. SSA keeps detailed records on more than 175 million active workers and 64 million beneficiaries.

Detecting an error in any of those millions of records is probably a remote possibility. An SSA error (or an error made by an employer reporting to SSA) is likely to go unnoticed unless someone is looking for it. And, in most cases, the only person likely to be looking for it is the person affected by it!

Here's my story. Two weekends ago, my wife and I each went to the Social Security Administration website and downloaded our respective SS statements. That's the document that lists earnings, year by year, over one's entire work life. These earnings records provide the raw data from which Social Security calculates a person's retirement benefits.

I skimmed my statement. My earnings record appeared to be accurate (as best I could tell). My wife's record, however, was wrong — and the error was obvious. Her statement listed zero earnings for 2017, a year in which she worked for about six months (before leaving her job when we relocated to another state).

Below the earnings data, I saw this:

Help Us Keep Your Earnings Record Accurate. You, your employer and Social Security share responsibility for the accuracy of your earnings record.... If our records are wrong, you may not receive all the benefits to which you're entitled. Review this [list of earnings] carefully using your own records to make sure our information is correct and that we've recorded each year you worked. You're the only person who can look at the earnings chart and know whether it is complete and correct. [bold in original]

Spotting an obvious error made us wonder: Were there other errors, perhaps from years ago, that had gone unnoticed? (I'm embarrassed to say we had never before taken the time to check the accuracy of our earnings records.) My wife and I decided it would be wise to review our earnings information going back to the mid-1970s when each of us began working. (Remarkably, we still have our W-2 forms and self-employment data going back that far!)

After finding all our old forms in the basement, we spread them out on the living room floor and, with a calculator in hand, checked our individual earnings year by year from 1975 forward. Reviewing our files and comparing them to the Social Security statements was tedious, especially for years when there were job changes (and therefore multiple W-2s) and/or self-employment income.

But after an hour or two of making calculations and comparing our results to the SS statements, we were confident that the 2017 error on her statement was the only one. Out of 87 earnings years between the two of us, 86 of them checked out A-OK.

The next thing was to contact the Social Security Administration. The switchboard opened the next day at 7 a.m., so my wife called early.

As you might imagine, trying to resolve a Social Security issue by phone proved to be tedious too. I don't how many people call each day, but even if it's only a small percentage of the hundreds of millions on the SSA's rolls, that's a lot of people. So long on-hold times are normal.

After 25 minutes, my wife finally got a live person on the other end. After explaining the situation, she was put on hold for another extended period while the Social Security rep accessed her records. In all, the call took more than an hour. Still, it didn't resolve the problem. My wife was told that she would have to go to the local Social Security office and present a copy of her 2017 W-2 form as evidence that her SS earnings record was incorrect. 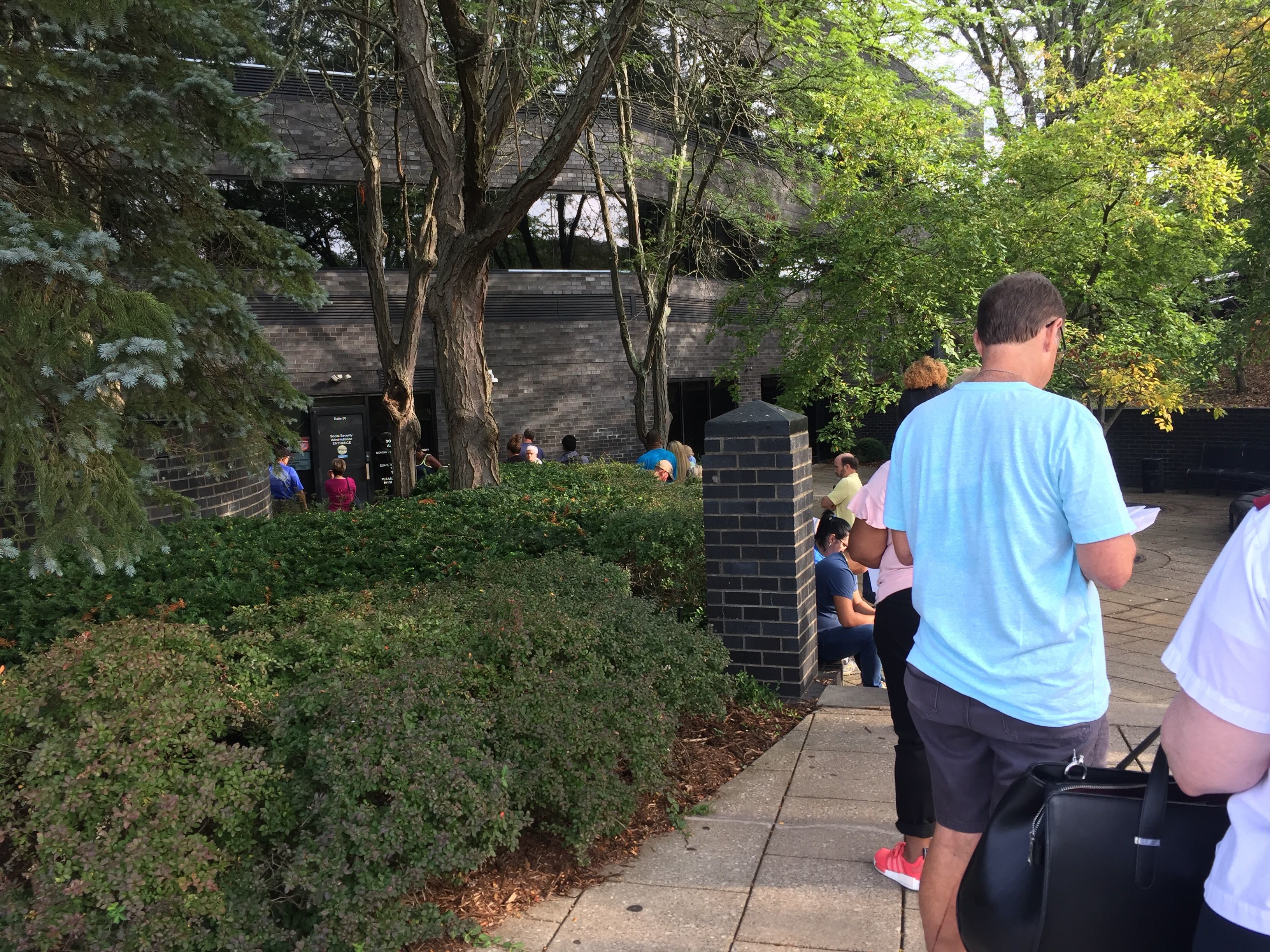 The local office, we learned, is open only 35 hours a week and has no evening or weekend hours. So, a few days later, I took time off of work and we went to the office bright and early, well before opening time. About 30 people were there ahead of us (photo at left). Fortunately, once the doors opened the line moved quickly.

Eventually, we reached a spot where we saw a lockbox and an accompanying sign. The sign instructed those who simply needed to leave documentation to put their papers in an envelope (a stack of large envelopes was there), write a few details on the outside of the envelope, and drop it in the box.

We did so and departed. So rather than being at the SS office for an hour or two, as we anticipated, we were in and out in with 15 minutes!

A few days later, my wife downloaded her Social Security Statement again, and we were pleased to find that it had been corrected with her 2017 earnings data. At her Full Retirement Age, that correction will translate into a benefit roughly $1,000 a year higher than it otherwise would have been.

So, in our case, four hours of one-time labor — finding our records, cross-checking, making a call, visiting the local office — could yield about $1,000 annually (not including future inflation adjustments). I would say that makes the inconvenience worth it!

While reviewing our SS statements, I noticed that one thing the statement doesn't explain is how the Social Security Administration arrives at its benefit calculations. But the statement does mention that the SS website has a calculator that enables you to "do the math" behind the benefits. Rather than use the official calculator, I decided to go with an easier-to-use one that I found on a free non-government website called ssa.tools (see image below). 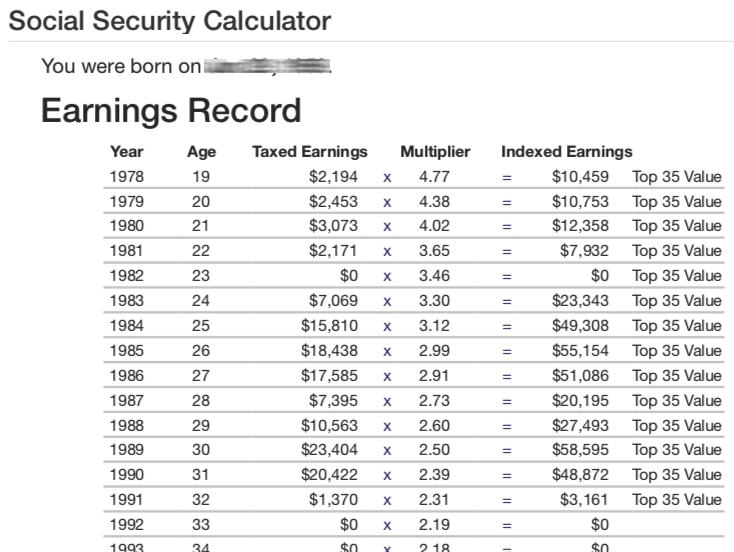 It turns out that Social Security retirement-benefit calculations are complicated. They involve taking one's 35 highest-earning years and, after applying inflation-type adjustments, adding them together to arrive at total indexed earnings. A formula is applied to that earnings number to arrive at Average Indexed Monthly Earnings (AIME).

From this AIME number, the Social Security Administration calculates a Primary Insurance Amount (PIA) by assigning greater weight to lower earnings and lesser weight to higher earnings. From those calculations, SSA arrives at a projected monthly benefit available at Full Retirement Age. (Whew! You can see why using a specialized SS calculator is helpful.)

The ssa.tools calculator lays all this out in a fairly simple fashion (at least, as simple as possible). Based on your age and earnings record, the calculator can project your SS retirement benefit based on the exact month you make your initial retirement-benefits claim. It also can lay out various scenarios, showing how the monthly benefit would change (for both spouses if you're married) depending on when benefits are claimed.

Knowing more than before

My wife and I still haven't figured out the best claiming approach for us, but at least we now know our respective earnings records are accurate and we understand how our SS benefit projections are arrived at.

I've concluded that reviewing one's SS statement is a wise idea! I encourage you to review yours. I also suggest you run the "back-end" calculations — either using the SSA's own calculator or the one at ssa.tools. That way you'll know what goes into SSA's estimate of your retirement benefit.