Of Lesser or Greater Interest

Starting next week, Merrill Lynch will "stop sweeping cash from brokerage accounts into money-market funds and instead funnel the money into deposit accounts at a unit of its parent company Bank of America," according to AdvisorHub.

That's a significant change because money-market funds currently are paying 1.75%-2.00%. Regular bank deposit accounts pay only about 0.25% — or even less.

Merrill Lynch is following the lead of Charles Schwab and Morgan Stanley, both of which made similar moves earlier this year. Bottom line: The investor ends up with a lower return on uninvested cash and the brokerage firm (or its parent company) reaps a benefit.

A recent post by Martin Small at BlackRock® Blog explains:

The bank pays you some interest rate on your "sweep" deposits, and invests your cash into higher-yielding investments (usually bonds).  The bank earns a "spread" on the difference between the rate it pays you on your cash deposits, and the rate it earns on the investments it makes using your cash.  This is called "net interest margin" or "NIM" in industry jargon. One-year U.S. Treasury yields are about 2.4% as of August 10, 2018. The bank sweep deposit interest rate in one of my accounts, with one of the top three retail brokers, was 0.22% (22 basis points) as of July 31, 2018.

Although I tend not to leave idle cash in my account, that means the bank could take my deposits, buy one-year U.S. government bonds and pocket the annualized difference between 2.4% and 0.2%.

In a column earlier this month (behind paywall), The Wall Street Journal's Jason Zweig gave a sketch of current industry practice, including the approaches taken by two companies SMI includes among its recommended brokerage firms:

Charles Schwab's brokerage now deposits all its bank-sweep balances at siblings Schwab Bank and Schwab Signature Bank. "In setting interest rates, the affiliated banks may seek to pay as low a rate as possible," says a Schwab disclosure. [The company currently pays as low as 0.22% on cash sweep accounts.]...

[E*Trade] lists 29 banks where it may deposit cash sweeps, and its disclosures say it relies on an outside provider’s “allocation algorithm” and “objective process” to distribute cash among those banks. Yet E*Trade has deposited 92% of its customers’ sweeps at siblings E*Trade Bank and E*Trade Savings Bank, according to its latest earnings release.... [E*Trade c]ustomers are now earning 0.15% on cash balances between $100,000 and $499,999....

If you think that's bad, the E-Trade sweep rates go as low as 0.04% for cash balances under $5,000. Meanwhile, the TD Ameritrade cash sweep account pays an almost imperceptible 0.01%! 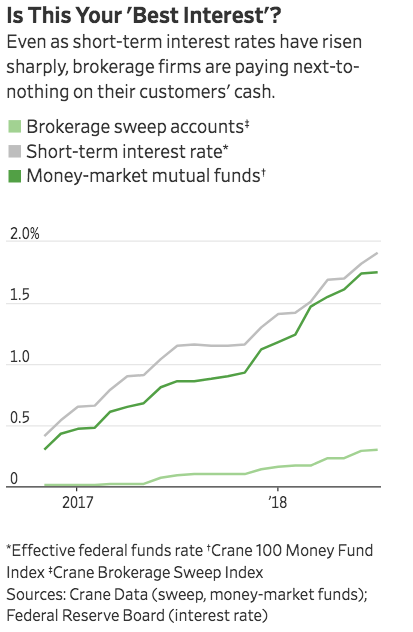 Fortunately, some brokers do offer higher-paying money-market fund options, but you must take the initiative to find out if such out funds are available and move your cash into them.

(Note: Vanguard Prime Money Market is also available via E-Trade and TDA, but transactions fees apply — $19.99 at E-Trade, $49.99 at TDA. Paying a transaction fee may or may not be worth it depending on how much cash you have on hand and how long you plan to leave in a money market account.)

Will most investors with significant uninvested cash make the effort to move their money to more productive vehicles? Probably not. As blogger Josh Brown notes (in a post targeted to advisor-led clients), that's exactly what brokerage firms are banking on.

You have to ask for the money market rate on your cash now. It won’t just be assumed. Your advisor has to specify. They're hoping enough accounts won’t get around to it, so they can pass on less and keep more.

What about you? Have you sought out a better-paying holding spot for any uninvested cash?
Print this article