Home > Articles >“Not QE” Has Changed the Market’s Trend

“Not QE” Has Changed the Market’s Trend

Stocks have posted six straight weeks of higher prices, pushing the S&P 500 Index above its long-term trend-line and breaking through the pattern of the past two years where significant new highs were inevitably met within the next few weeks by a market pull-back or correction.

Importantly, there was a clear catalyst to this change, one with enough of a track record to plausibly suggest it could keep stocks moving higher for a while longer.

To no one's surprise, the Fed is at the center of the shift in market trend.

I'm going to briefly explain what has happened over the past two months, its impact on the financial markets and the current market trend, and what our response should be as SMI investors. Thankfully, the SMI strategies are equipped to handle this. But as we'll see, there are still some issues to consider — especially for investors nearing or already in retirement.

What changed the market's trend

Back in September, we noted the strange problems occurring in the Repo — or overnight bank lending — market. For reasons that were largely unclear at the time (and are admittedly still opaque but getting clearer), banks weren't lending to each other at normal, low-risk rates. This article by Lyn Alden Schwartzer does a great job of breaking down the backstory, but the short version is that it appears that the banks that serve as the conduit of placing new Treasury debt were getting overwhelmed by the rate of issuance by the Federal Government. You may have heard that we're issuing a lot of new debt? Well, the fact that foreigners aren't gobbling it up as rapidly as in the past means that domestic sources are having to absorb more, even as the amount issued soars.

Further simplifying a complicated story, the Fed first stepped in with overnight operations to help the Repo market. On October 8, they upped the ante by announcing they would begin buying $60 billion of short-term Treasury Bills each month through the middle of 2020. They subsequently, and much more quietly, announced two additional Repo operations targeting longer (up to 14-day and up to 28-day) periods.

Translation: the mechanism to place new Treasury debt was breaking down because there is now so much of it being generated. So the Fed has stepped back into the picture as an immediate buyer of this new debt. When the Fed was buying new Treasury debt earlier in the decade, they called it Quantitative Easing, or QE for short. This time, they've tried to be clear that this new effort isn't QE.

In one sense, that's true. It's worse, as I'll explain in a moment. But from a "tell the truth!" perspective, this is pretty simple. The only difference in terms of what the Fed is doing now versus several years ago when it was QE is they're buying shorter-term debt now (T-Bills) whereas they were buying longer-term debt (T-Bonds, among other types of debt) then. Thus the ironic "not QE" mentions here in this post and throughout the financial media.

This is a big deal for a couple reasons. First, in all the prior versions of QE the Fed was explicit that their monetizing of the Federal Debt issuance was temporary and the intent was that such buying would eventually be unwound in the future. And, in fact, they did try to follow through on those assurances. As the chart below shows, the Fed spent 21 months slowly reducing the size of their balance sheet, unwinding those prior QE purchases. 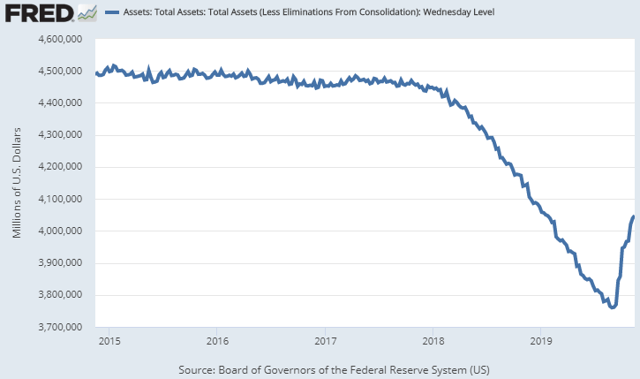 Unfortunately, as the chart also shows, the Fed has reversed 40% of that progress in just the past two months. At the stated rate of buying ($60b/mo.), the Fed's balance sheet will be bigger than ever before by the time the current planned purchases conclude by mid-2020.

The reason this is arguably worse than before is the Fed isn't playing around with assurances of normalization and payback anymore. They basically tried to normalize interest rates and their balance sheet and the effort failed miserably. The financial markets rolled over big time last December and the real economy has battled a slowdown all year that could still wind up as the first recession in over a decade. No one is saying it, but there have to be plenty of people at the Fed questioning whether these conditions can ever be normalized, at least in the sense that term was understood when the first QE programs were rolled out as temporary, emergency measures.

Impact for the financial markets

That's enough of the backstory, what are the implications for the investing markets?

As this chart from Sven Henrich of Northman Trader clearly demonstrates, new QE programs aren't to be taken lightly, as they have repeatedly shown they have the power to move markets over the short-term. Follow along the bottom trend-line and note the stock market bounces provided by QE1, QE2, TWIST, QE3, the "Yellen Flip Flop" (when they announced QE was going to be rolled back, only to reverse that decision when the markets fell), and finally the "Powell Flip Flop" last December (when he basically did the same thing as Yellen). Each of those instances sparked a powerful move higher.

It's also worth noting that the recent six-week spurt higher since the announcement of "not QE" in early October has pushed the market above the top trend-line for the first time in this entire bull market. It's hard to know exactly how to interpret that, but it has to at least be considered as a positive breaking out of the pattern of the past two years that I mentioned earlier, where each set of new highs was met within just a few weeks by a significant pull back.

It's vitally important here to reiterate that successful investing is about managing probabilities. We never get to deal in certainties. There are a dozen reasons why I'm not at all excited about chasing a market rally higher here, given the overall economic picture and (especially) the current valuation of the stock market relative to historic norms. While SMI's strategies have lagged the market a bit as it has rocketed higher this year, at least we've had the comfort of knowing that our portfolios were positioned fairly conservatively and would hold up reasonably well if the market did fall apart.

That said, SMI's portfolios are based on trend-following strategies. Six weeks ago, an event occurred that has clearly altered the market's trend. It's showing up in the numbers across all of our main strategies. Nothing is set in stone, of course, and there's still time for a pullback to develop that could slow this transition. But at this point, all signs are pointing to some significant changes across all of SMI's strategies at the end of the month. And those changes will be in the direction of taking on more market exposure and risk.

A framework for disciplined investor behavior

Two further points and I'll conclude. First, looking back at the "past QE" chart again, it's fair to say that at each of the points where the Fed intervened over the past decade, we would have felt at least equally ill-at-ease with the idea of boosting our stock exposure (or the risk level of our stock holdings). In 2009, we had to beg readers to stick with stocks after what they'd just been through in 2008. In 2010 and 2011 (QE2 and TWIST), the market was coming off nearly -20% declines. The Yellen Flip Flop in 2016 followed back-to-back -10% corrections just months apart, and the Powell Flip Flop last December came as the market was closing in on -20% bear market territory. So it's not surprising that we'd feel hesitant to embrace the new move higher. We have every time before, why not now?

And yet, we also know that at some point, the Fed will take an action like this and it will fail. That's what happens in bear markets. The Fed sees the car beginning to sputter and hits the gas, expecting it to roar back as it has so many times before. Except it doesn't and keeps declining instead. We don't know when that will happen, but we're at extremes in valuation that make us legitimately wonder how high they can go. Unfortunately, we're still squarely within this central bank experiment that has never been tried before. It's been going on for a long time now — 10+ years — but no one knows how this movie ends, because it's never been tried before.

And ultimately, that's where the risk-management comes to a head. Sure, we have risk-management built into the SMI strategies, and we still expect those defensive protocols would help us avoid the worst of a really serious decline from here. But as the strategies follow the recent trend of a once-again rapidly climbing market, SMI members need to ask themselves if they're comfortable with the increasing risk/reward tradeoff. Younger investors should likely just stick with the program — they have plenty of time to recoup if this move higher ends in tears. Older investors need to consider the risk level of their portfolios and make sure they aren't taking on more risk than is really necessary to achieve their goals. This doesn't mean scrapping the SMI strategies, but it may mean shifting some money from Stock Upgrading (or Indexing) into Bond Upgrading. Or perhaps backing off from Sector Rotation a bit if it rotates into something really high-octane, as it very well might at the end of the month.

Such is the nature of following the trends as we get late into bull markets. We faced the same dilemma at the end of the 1990s, wondering how far can this market possibly go? The answer then was a lot further than anyone imagined. The good news is that, while there were definitely tears in store just around the corner, SMI investors who stuck to their guns and faithfully followed the SMI strategies came through the ensuing bear market in pretty good shape and absolutely thrived in the bull market that followed.

Most importantly, the SMI strategies then — as now — provide a framework for disciplined investor behavior in response to ever-changing market trends. That objective discipline is a much better guide than investor emotions, and leads to quantifiably better long-term outcomes.