Here's a thought experiment: How would you invest a tax-free $10,000 gift? Put the money in savings? In the stock market? Pay off debt?

Market-research firm OnePoll put the $10,000 question (plus other related queries) to 1,000 people on behalf of the loan-marketing website LendEDU.

Here is how the main question was phrased:

If you were given $10,000 tax-free and had the ability to invest all of it in one of the following options, which would you choose?

From among more than 10 options given (see below), respondents chose "pay down debt" most frequently, with 27.3% saying that they'd put the $10K toward getting out of debt (half of those specifically identified credit-card debt). That's an encouraging response. Reducing debt is essential to achieving financial stability.

"Invest in the stock market" — as a stand-alone option — didn't rate too highly (7.2%), but two other options likely would involve investing in the market: 9.9% of respondents chose "invest in 401(k) or IRA" and 6.9% would invest the money toward a "child's education." Added together, those three options would put market investing as the second most common option (24%). 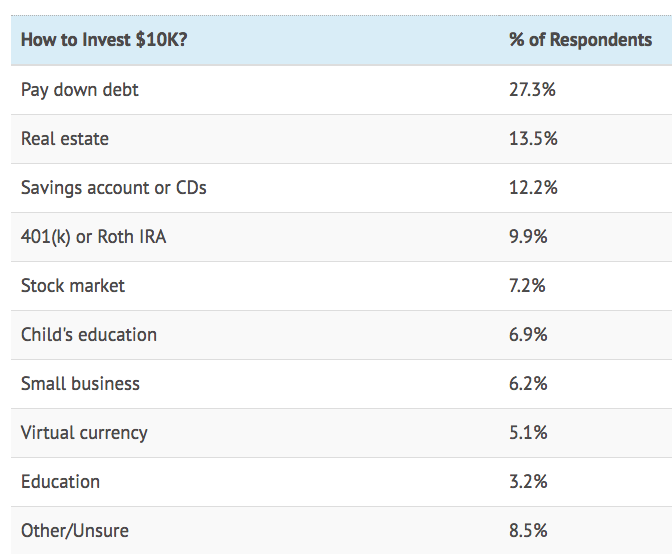 In addition to tallying overall responses, the pollsters broke down the data by age group. Although several options rated similarly across the generations, a few didn't. Note, for instance, the relatively strong interest among millennials re: investing in virtual currencies: 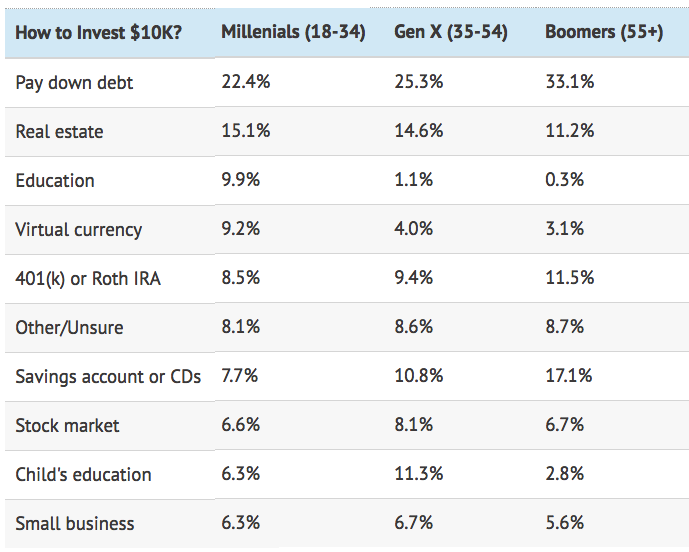 (Keep in mind about polls that how a question is phrased has a lot to do with the responses received. If the $10,000 question were open-ended — i.e., not limited by 10 or so options to chose from — I suspect many people would opt to put the $10K toward a new car or widescreen TV!)

Let's get back to making this a personal question: How would you invest/use a $10,000 gift?

Would you incorporate the money into a plan you've already established (for giving, retirement, education, etc.)? Would you shore up your emergency fund or other savings? Or would you consider the $10K a "windfall," to be used totally outside your existing plan?

We'd be interested in your comments! "Join the Discussion" below.