History Indicates What Comes Next

As a follow-up to my post from yesterday, Significant Market Test Ahead, I want to highlight a few things from an excellent article by Bryce Coward, CFA, titled, What Does a Typical Counter-Trend Rally Look Like After a Big Drop in Stocks? It's a short article, so I recommend giving the whole thing a quick read if you have time.

Whereas yesterday's discussion focused on the potential resistance ahead for the stock market's current rally, as well as the reasons for that rally, this article focuses squarely on what the market has done in the past following the type of decline we experienced in December. Here are the highlights.

It's interesting to note that this is just the 20th example of a -15% "waterfall decline" in the post-war period. Defining that more clearly, the author is talking about -15% declines that didn't have a "bounce" (i.e., counter-trend rally) of at least 5% interrupting the decline. We had that type of uninterrupted decline between December 3-24 when the S&P 500 fell -15.7%.

Coward makes the following observations about the preceding 19 examples of these uninterrupted -15% waterfall declines and their ensuing rallies:

I'm glad Coward includes the median (or mid-point value, where half the examples are higher and half are lower), because the averages can be distorted by one or two exceptions in a limited data set like this. The median arguably provides a better picture of what the "normal" experience has been.

Coward's observations about the current counter-trend rally, based on these data:

The two big takeaways from this are the following:

Developing that second point further, the recession indicators I watch are showing a greater likelihood. Steve Blumenthal of CMG Wealth updates a panel of "Trade Signals" each week and yesterday's contained the following chart from Ned Davis Research. It's important primarily because most of the recession forecasts we see/hear are focused on the U.S. economy, which is in significantly better shape than the rest of the global economy right now. But it's probably wishful thinking to imagine that the U.S. can dodge a recession if the rest of the world ends up in one. According to this chart, there's roughly a 90% chance we're either already in or about to enter a global recession. 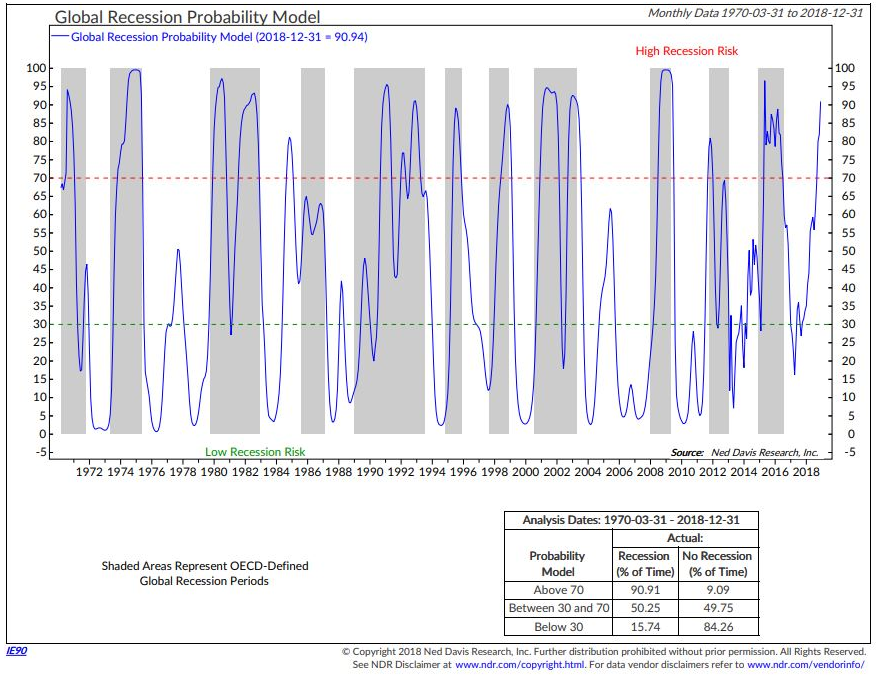 The two "maybe not" scenarios I keep considering as possible parallels to today are 1998 and 2011. Both were similarly steep declines to what we suffered through in December, but neither immediately led to a deeper bear market. The 1998 scenario seems the more plausible of the two, given the high market valuations both then and today, and obviously in hindsight we know that a big bear was coming, it just wouldn't arrive for another 18 months. The 2011 scenario seems less plausible, as valuations were lower than today and we were just coming out of a deep recession/bear market, whereas today we haven't experienced either for over a decade.

That said, in both cases, the market had clear retests of the initial decline. You can clearly see those retests in these charts posted recently by Charlie Bilello on Twitter: 1998 and 2011.

The bottom line of all this information we've presented yesterday and today is simply this: there's plenty of reason to still be cautious, despite the market's January rebound. Thankfully, if you're following SMI's strategies, you can rest easy knowing that both Upgrading 2.0 and Dynamic Asset Allocation are running their unique processes to monitor how defensive our portfolios should be. As we've noted before, high volatility — demonstrated both in sharp declines and short-lived rallies — is a hallmark of bear-market behavior.

More than anything else, corrections and bear markets require emotional discipline to stick with the plan and trust your process. It's so easy to get swept up in the emotional roller coaster as markets plunge and rebound. Know that the SMI strategy processes are robust and have been designed to not get "tricked" by the market's shorter-term moves as we make our way through treacherous periods. If this time is different and the worst is over, that will become clear soon enough and our strategies will adjust. But at this point, most of the evidence continues to support a cautious — if not downright skeptical — outlook.