Home > Articles >A Disaster – or Our Finest Hour? Generous Giving in the Time of Coronavirus

A Disaster – or Our Finest Hour? Generous Giving in the Time of Coronavirus

It's too early to get reliable data on how the COVID-19 pandemic is affecting levels of giving to churches and other ministries.

However, the Barna Group has published limited data (about church giving), based on online surveys conducted March 20-April 6. In all, Barna polled 629 Protestant senior pastors in the U.S.

Two-thirds of pastors (64%) reported that monetary giving is down, 28 percent significantly and 36 percent slightly. While roughly a quarter (23%) claims giving has stayed the same, 13 percent has indicated an increase (4% significantly, 9% slightly).

Three in 4 pastors (75%) say someone within their church has had their income impacted by reduced hours at work. Around 2 in 5 (42%) say one of their church attendees has lost their job....

As members have lost income, churches are struggling as a result. Half of pastors (52%) say giving has decreased compared to earlier this year. One in 5 (18%) say giving has continued at similar levels, while 2% say it has increased. Around a quarter of pastors (28%) aren’t sure.

There's no way to tell if these early surveys will turn out to be representative, but it's safe to say that many local churches (as well as other ministry organizations) are in an environment of great financial uncertainty, especially if unemployment levels remain elevated.

"Donors who are committed"

In a piece titled, "Will the Coronavirus Impact Charitable Giving?," published at MinistryWatch.com, fundraising advisor Rick Dunham offers an encouraging word about giving levels, based on past experience in times of recession.

Giving tends to be recession-resistant. It’s important to know that historically, giving in current dollars has maintained or even increased in recessionary years (see the Giving USA chart below). The one exception is the “Great Recession” from 2007-2009.

So when the economy struggles, it’s not unreasonable to see that charitable organizations can weather that storm with donors who are committed to the organizations they care about most. 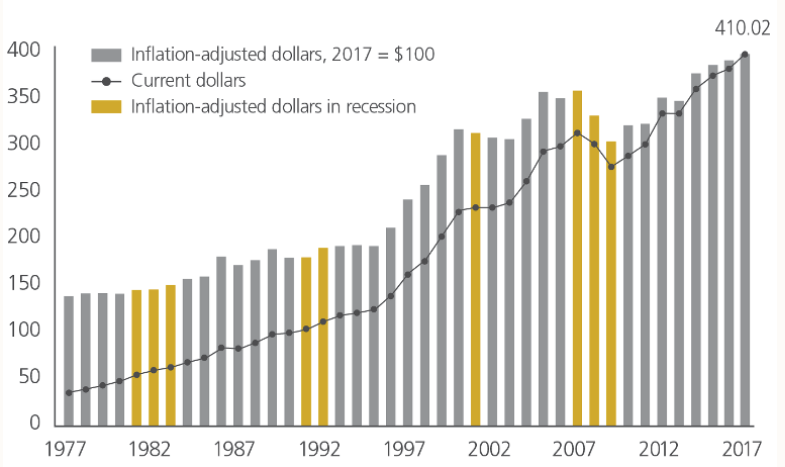 We don't yet know if we are heading into a recession or, if so, how long it will last. But we do know that people who lose their jobs — as millions already have — and others who've had their hours cut back, don't have the financial resources to continue giving as much as before.

So this is a time for people who do have the resources to give even more, as Rob West of Kingdom Advisors urged on a recent MoneyWise Live program. And he offered advice for church and ministry leaders.

It's really critical...[to] think about how you're communicating with your constituents. This is a time I believe to be communicating more frequently. Let them hear from you. Connect your vision to what's actually happening right out there in the world right now.

And I think it's an opportunity to challenge donors with [the financial] capacity to really step up and perhaps do more than they were planning — out of a recognition that others just won't be in a position to do that.

As I was thinking about this, I recalled a scene from the 1995 film Apollo 13, the story of the 1970 NASA moon mission that went dangerously awry ("Houston, we've had a problem"). Could the astronauts be returned safely, or would they die?

In the film version, a director at Mission Control worries out loud: "This could be the worst disaster NASA's ever experienced." To which Gene Kranz, the lead flight director (played by Ed Harris), responds with steady confidence: "With all due respect, sir, I believe this is gonna be our finest hour."

Yes, the financial impact of COVID-19 on the church (and other ministries) has the potential to be a "disaster." On the other hand, by God's grace and through our obedience, it may lead to this:

You will be enriched in every way so that you can be generous on every occasion, and through us your generosity will result in thanksgiving to God. This service that you perform is not only supplying the needs of the Lord’s people but is also overflowing in many expressions of thanks to God. (2 Corinthians 9:11-12)