Home > Articles >“You’ve Got to Know When to Fold ‘Em”

“You’ve Got to Know When to Fold ‘Em”

If you’re following SMI’s strategies, you already receive regular, objective alerts when it’s time to replace a fund. But for those who aren’t doing so, or who invest through a 401(k) using funds other than SMI’s fund recommendations, it’s important to monitor — and occasionally prune — your holdings.
We applied performance tests to more than 2,000 funds to identify the consistent “also-rans” that should be replaced. The result is a Laggards List of funds to sell (or avoid) for ongoing profitability.

Most investors will concede that reaching a decision on when to sell a fund is almost as daunting as deciding what to buy in the first place. The process is made more difficult by three personal fears that can paralyze you.

Let’s look at four primary reasons for selling, and see how you can approach the decision-making process in an objective way that neutralizes your fears and frees you to take timely and appropriate action.

It’s important to have a selling strategy to nudge you out the door when a fund you own underperforms.

SMI’s Stock Upgrading strategy based on performance momentum is an excellent discipline that will help you overcome your inertia. Consider this illustration of how Stock Upgrading repositioned our model portfolios into more aggressive holdings, automatically, when the 2007-2009 bear market ended.

As the market was bottoming in early March 2009, Stock Upgrading was positioned in conservative funds. But as the new bull market unfolded, our Upgrading methodology weeded out the more defensively-oriented funds and replaced them with funds that would profit much more handsomely from the new market uptrend that was underway. By the end of 2009, 17 of the 20 stock funds from the March lineup had been sold and replaced. As a result of this structured selling process, the model portfolio turned in market-beating gains in both 2009 and 2010, outpacing the broad market by 7.0%.

Going back a bit further to 2007 (the year the bear market officially began), the benefits of Upgrading’s selling discipline become even more pronounced. Stock Upgrading actually managed a 10.1% gain for the 2007-2010 period — despite suffering the deepest bear market in a generation. In contrast, the overall market lost 0.3%. (Recent year-by-year performance results for all of SMI's strategies, as well as the overall market, can be found here.)

To encourage you to take a tough-minded look at your current fund holdings, we decided to prepare a list of “time to fold ‘em” funds, both load and no-load. I used the Morningstar database and instructed the software to retrieve performance information on U.S. and foreign stock funds, but to exclude index funds, foreign regional funds, very small funds (under $25 million in assets), and funds that didn’t have at least a five-year track record. The result was a listing of almost 2,500 hybrid and stock funds. Next, I grouped them into their respective risk categories so I could compare apples to apples as I put them through two tests.

The first test involved ranking them according to their most-recent one-year performance momentum. All the funds in the top half of each risk category’s rankings “passed” the test; those in the bottom half “failed.”

However, the past year has been a distinctly different market environment than much of this recent bull-market period. So for the second test I ranked all the funds again, but this time according to their most recent five-year performance. As before, I considered those in the top half to have passed and those in the bottom half to have failed.

To make my Laggards List, a fund had to flunk both tests. As it turned out, 862 funds earned this dubious distinction. These funds failed to perform in the top half of their risk category with respect to SMI’s momentum calculation (which covers the past 12 months) when the market hasn’t performed particularly well, and also for the past five years when the market was rising.

Due to space limitations, we can’t include the entire Laggards List here, but the 100 largest are shown at the bottom of this article. These are the ones most widely owned by investors, and by extension, investors who have been slow to take action when a fund needs to be sold.

The entire Laggards List of 862 is also available to SMI members (see the links below). Check it out. What you’ll find could be eye-opening, especially if you participate in a 401(k) plan at work. There are more than 90 target-date funds on the list. More than 75% of 401(k) plans offer participants the option of choosing such a fund. In many plans, a target fund is now the default option. Because of their ease of use (you simply pick the fund that has the year of your expected retirement in the name), they’ve become popular with plan participants. But all target-date funds are not created equal, and you should know if the funds in your plan have been consistent underperformers.

Time for a change? 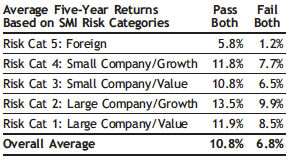 If I owned any of the funds on this list, I would unload them now. Their absolute returns have not necessarily been bad, but in comparison to the other funds in their peer groups, they have been consistent also-rans in recent years. You can do better. The nearby table shows the difference in the recent five-year returns of those funds that passed both of our two tests compared to those that failed both.

Investors have a staggering $1.1 trillion in the funds on the current Laggards List. If some of that money is yours, it’s time for a change. I’m not saying the current laggards will never shine again. There are many funds on the list that have managers with excellent reputations. Some of them have been on SMI’s recommended list in the past. They may indeed return to the ranks of performance leaders down the road, and we’ll be happy to own them when they demonstrate they’re on top of their game once again. But in the meantime, doesn’t it make sense to go with funds that are better positioned for the current market?

You can use this as an opportunity to invest in one (or more) of our recommended funds. For each category where you need to make a change, start with the top-listed recommendation. If a recommended fund is available at your brokerage, contact your broker — online or via phone — to buy the fund(s) you’ve picked. An advantage of using no-load funds is that such changes are relatively easy to make. (If you’re in a load fund, you usually can move to another fund within the same family at no cost.) And if you own a “laggard” in your 401(k) or other workplace retirement plan, you can use our Personal Portfolio Tracker to determine which funds within your plan are better current alternatives.

Markets and market leaders change continually. It’s possible that within the next year or two you’ll find some of our current favorites on an updated Laggards List! Staying flexible and being ready to upgrade your holdings as the performance leaders rotate is the price you pay for better returns.

To take advantage of this offer, simply scroll down and click the red “Start My Free Trial” button that appears immediately after the list of funds below. Follow the rest of the free-trial prompts and you’ll be enjoying your new trial membership in no time. It’s that easy!

Even if you don’t plan to continue your web membership beyond the trial period, we invite you to be our guest and check out the full list of 862 laggards. For more than 25 years, SMI has helped tens of thousands become better stewards and investors. We’d like to help you too! Come and see the rest of what SMI has to offer. There’s no risk — your first 30 days are on us!

Austin Pryor has 40 years of experience advising investors and is the founder of the Sound Mind Investing newsletter and website. He's the author of The Sound Mind Investing Handbook which enjoys the endorsements of respected Christian teachers with more than 100,000 copies sold. Austin lives in Louisville, Kentucky, with Susie, his wife of more than 57 years.