The stock market suffered another day of steep losses yesterday, with the S&P 500 falling -3.2%. Small stocks were hit even harder, with the Russell 2000 down -4.4%. It was the fifth day so far in 2018 that the S&P 500 has fallen at least 3% (and the second-worst December daily decline in the past 25 years). But it was the worst single-day decline for the Russell 2000 in more than seven years.

Despite the painful losses, yesterday doesn't really add any clarity to the current status of the stock market. Consider the following chart, which shows the market's path over the past three months: 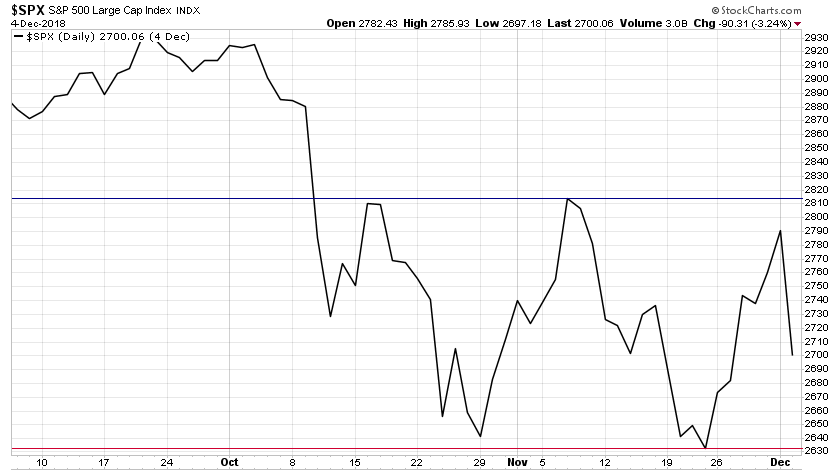 The chart shows the market peak on September 20, and clearly illustrates the trading range that has been established over the past eight weeks. For context, this decline only became an official -10% correction (for the S&P 500 index) at the very bottom point on November 23. So while we've finally reached "correction" status, it is only barely so. Which means that, in a historical context, this recent correction isn't anything to get worked up over yet. Prices currently sit right in the middle of that trading range, even after yesterday's sell-off. Until the market breaks out of this trading range, we don't have a definitive market trend.

That's the "benign/optimistic" take on the current situation. The slightly more pessimistic take would add the fact that the last two significant turning points on this chart are a lower-low (Nov. 23) and a lower-high (Dec. 3, just two days ago). Lower-lows and lower-highs are definitely not what the bulls want to see. Add to that the fact that the post-election rally fizzled immediately, when that was supposed to be a potential seasonal catalyst for higher stock prices. And just in the past week we've had two supposedly big bullish news items come in — the Fed chairman saying interest rates likely won't keep increasing as rapidly (or as long) as had been previously expected, and Trump/Xi agreeing to a short-term trade "truce." Yet the rally off those positive news items was surprisingly brief, with the market turning sharply lower again almost immediately.

The latest "reason" for the stock market selling off was yesterday's partial inversion of the yield curve. (I put "reason" in quotes here because, as you're likely aware if you've been reading SMI for long, we're always skeptical of the explanations the media attaches to market movements. They have to pin an explanation on every market wiggle, but that doesn't mean their running narrative adds anything to our understanding of what the market is actually doing.)

At any rate, the inverting yield curve is admittedly a potentially big deal, so let's unpack that a bit. (I wrote an overview of the flattening yield curve six months ago, which is a good starting point if you want more information.)

The yield curve simply refers to the various yields being paid by the U.S. Government on its debt of various maturities. When plotted on a chart, those yields form a curve, given that most of the time short-term debt pays a lower interest rate than longer-term debt. That makes sense — if you're tying up your money longer, you typically expect to earn a higher interest rate.

The problem comes when part of the yield curve inverts — meaning shorter-term is paying more than longer-term. Big picture, an inverted yield curve typically means that investors are losing confidence in the longer-term prospects for the economy. Expecting lower growth in the future, they are discounting the risk of future inflation and accepting lower interest rates for longer.

Yesterday was a big deal because part of the yield curve finally inverted. The chart below shows the 2-year rate inverting relative to the 5-year, providing a good visual illustration of what we're discussing. 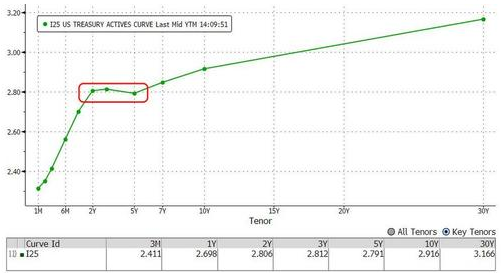 First, it's important to acknowledge that when most people discuss the yield curve inverting, they're talking specifically about the 2-year rate exceeding the 10-year rate. That hasn't happened yet, although at just an 0.11% spread, it's getting close. But keep that in mind, because by that "normal" definition, the yield curve has NOT inverted yet.

The reason an inverted yield curve is a big deal is that it has been one of the most reliable economic indicators in recent history. Over the past 60 years, the yield curve has inverted nine times. All nine times, the economy followed by slipping into a recession. Not right away, as the inversion came an average of 14 months before the recession officially began. Also worth noting, a yield curve inversion led the stock market peak by an average of eight months.

What about the "non-official" 2-year rate inverting relative to the 5-year, which is what happened yesterday? Market researcher Charlie Bilello provides the following statistics of what followed the last three times that happened:

Clearly, in the past this type of early inversion has not been a signal that stocks or the economy are in imminent danger. These signals have had long lead times of 18-24 months prior to the eventual stock market peaks, and even longer until the eventual recession.

So to sum this up so far, yield curve inversions have an outstanding track record of signaling that a recession is coming. But there's usually quite a long lag time first before stocks peak and the recession begins.

Let's consider a couple of potential caveats to all this:

I don't have any special insights into these caveats or what they might mean. I think it's good for us to be aware of them so we can stay mentally nimble and not be locked into any particular expectations. Of course, that's a lot easier for us to do when we're relying on SMI's mechanical strategies, knowing they will monitor the market's signals and tell us when it's time to take action.

Bottom-line: this early, "non-official" inversion is just another piece of evidence that we're methodically grinding toward the end of this bull market and the beginning of the next bear market. However, it also suggests that we still might not get there for a while. So I wouldn't do anything drastic based on this information. The long lead time of past yield-curve inversion signals tells us that we can afford to be patient, let the market show us its intentions by how it resolves the current trading range, and patiently wait for our SMI strategies to tell us it's time to get more defensive. After all, in the past the market sometimes kept working higher for a year or more after the yield curve inverted.

There is one significant takeaway from this yield curve situation. In my view, an official inversion would be a significant confirmation that the next bear market — whenever it eventually arrives — is likely to be a significant one.

Given that the inverted yield curve is 9-for-9 predicting recessions over the past 60 years, it's important in terms of what we need to be preparing for. (And again, an official inversion hasn't happened yet — I'm referring to the traditional 2-yr/10-yr yield curve inversion.)

Hopefully, you've already considered your strategy allocations in light of a potential 2000/2008-type bear market sometime in the next few years. If you haven't, this early inversion warning is definitely a wake-up call that it's time to do so.