Home > Articles >Will the Bear’s Bite Be Especially Painful for Passive Investors?

Will the Bear’s Bite Be Especially Painful for Passive Investors?

Managing expectations is a crucial aspect of successful investing. With today’s long-running bull market having proven its resilience in the face of political, economic, and virtually every other type of threat over the past eight-plus years, it’s become dangerously easy for investors to expect the good times to continue indefinitely.

Perhaps more than any other group, index-fund investors are particularly at risk of complacency due to their passive approach to their investments.

The golden age of indexing

The dramatic shift to index funds has been fueled by a pair of powerful forces. The first is the recent performance of passive index funds relative to actively managed investments. Active management, taken as a whole and after accounting for its typically higher fees, has failed to beat its benchmarks in most cases. This performance shortfall has been especially vivid during the current bull market, which now extends back the better part of a decade. As a result, it’s been easy for investors to become convinced that passive investing is the “simple” way to succeed. 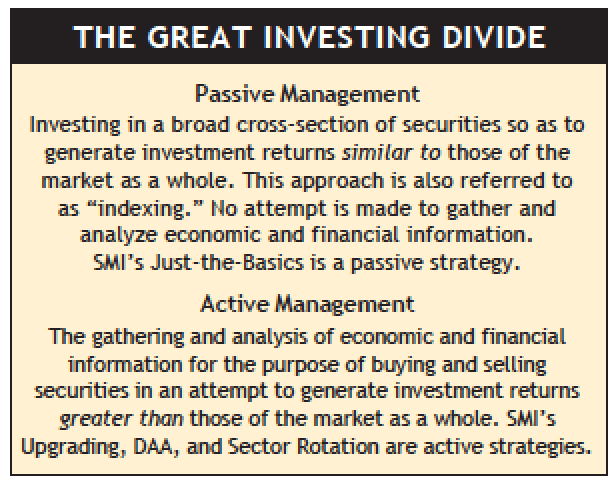 Second, the dominant financial advisory model has shifted so as to align advisors with indexing. Over the past 10-15 years, most advisors have shifted away from the old commission-based model in favor of a “1% of assets” wrap-fee approach.

While in theory this unties an advisor’s hands to recommend whatever he or she thinks is best, in reality the overall fees charged within the portfolio are a significant constraint. With the advisor’s fee already at 1% or more, it’s difficult for most advisors to recommend adding substantial active-management fees on top of that. Putting a client in a suite of low-cost index funds is much more palatable, as it keeps the overall expense ratio of the portfolio lower.

Not surprisingly, the brokerage house that invented the index fund, Vanguard, has been the biggest beneficiary of index-fund enthusiasm, with nearly $300 billion flowing into its funds in the first nine months of 2017. The firm now has $4.7 trillion under management.

Daniel Wiener, editor of the Independent Adviser for Vanguard Investors, a newsletter that follows Vanguard funds, told The Wall Street Journal there’s only one thing that could stem the tide: “I don’t think that there’s much that changes these flows until we have a negative market. I can’t tell you when that happens, but when it does there will be a lot of very surprised investors.”

And there’s the rub for index-fund investors. Having bought into the narrative of index-fund superiority, and having enjoyed a relatively smooth upward ride since 2009, any change of market direction likely will come as a shock. Concerns are growing that index-fund investors in particular may be in for an especially rough ride when the market changes direction.

Josh Brown, CEO of Ritholtz Wealth Management and author of the widely-read blog The Reformed Broker, wrote this in May: “What will happen into the teeth of the next 20% stock market decline? Here’s what I would guess: Vanguard loses 10-15% of its AUM [assets under management], an enormous outflow in a very compressed period of time as newly-minted passives realize that they’re not quite cut out to be passive after all. The pain will prove too much for many recent indexing dilettantes who thought this was easy.”

There are at least two specific reasons to believe index-fund investors may suffer disproportionately during the next bear market:

What does it mean for SMI investors?

Here are a few thoughts to consider, depending on which of SMI’s three core strategies you use.

If you do decide to focus on DAA, you will still need to manage your expectations. Remember that DAA, like Stock Upgrading, is a trend-following strategy. As such, it won’t avoid all losses at the beginning of a bear market. For example, when the market lost -4.2% in November of 2007, DAA investors would still have had two-thirds of their portfolio invested in stocks and would have had losses of -3.1% that month. However, DAA shifted out of U.S. stocks the very next month and stayed out through the remainder of that bear market, saving investors from tremendous losses. (For more on how DAA performed during the last downturn, read How Short-Term Thinking Can Derail Long-Term Success.)

Note that this article isn’t meant to suggest that SMI believes a bear market is imminent. We have long held the position that the future direction of the market is unknowable. That said, as we have been reminding readers lately, no bull market lasts forever. Eventually this one will end, as they all do, so manage your expectations accordingly.

What Tesla & Buffett Tell Us...

Financial Advice From the Father...