Will Fed Tightening Break Something?

There's a perception that the Fed hasn't done much yet to counter inflation and that this battle will basically begin at their May meeting.

That's largely accurate, as the Fed has been way behind the curve in dealing with the inflation threat. First, they misdiagnosed it as transitory, then they clung to that narrative long after it was obvious inflation was persisting, and finally, they've dragged their feet on taking action to curb it, opting to make just one tiny quarter-point hike so far.

I detail all of this in the May cover article of SMI, which releases later this week. But I wanted to present a couple of charts beforehand (partly because I couldn't fit everything I wanted to into the article!).

Modern central banks employ three primary levers to influence financial conditions. This is a big change since the Great Financial Crisis 13 years ago, prior to which they basically only used one. The one they've used forever is adjusting the Fed Funds rate, which is the shortest-term interest rate on government debt and the only rate that the Fed sets directly. So when we look back at past Fed responses to inflation and see that the Fed hiked interest rates by, for example, 5% (500 basis points) in a given episode a few decades ago, while today's Fed has only hiked 0.25% (25 basis points), today's response obviously looks pretty pathetic.

And it kind of is, if we're being honest. I can't bring myself to defend them in any shape or form.

But while the Fed hasn't done much yet "officially," today's Fed leaders are wielding a second lever past Fed leaders rarely, if ever, used: their forward guidance function. If you haven't noticed, today's Fed bankers talk A LOT. Every week they seem to trot out a long lineup of Fed Governors giving speeches, through which they constantly are updating and adjusting the market's expectations.

There are pros and cons to these differing approaches, but one thing is clear. Today's Fed gets the markets to do some of their dirty work for them. For example, consider this chart from Schwab's Chief Investment Strategist, Liz Ann Sonders:

While the Fed has only hiked once so far, the bond market has already largely priced in 10 rate hikes (250 basis points, or 2.5%). And largely as a result, financial conditions have already tightened significantly since November — before the Fed has really started hiking rates or embarking on Quantitative Tightening.

Where might all this be heading? Again, more details coming in the May issue of SMI later this week. But when the bond market moves this far, this fast, stuff breaks.

A few charts from market wizard Jim Bianco make this point vividly (sidenote: Jim is one of my favorite financial guys, if you're on Twitter he's definitely worth following).

First, how dramatic has the bond decline been so far this year as investors brace for the Fed to finally engage the battle against inflation? How about the worst ever.

This is now worse than 1980 (monthly calculation), the year that "scarred" bond investors for a generation. pic.twitter.com/XKbc88dAXP

Having established this bond move is as dramatic as any the market has seen in decades, Bianco goes on to detail what has broken each time rates have spiked like this: 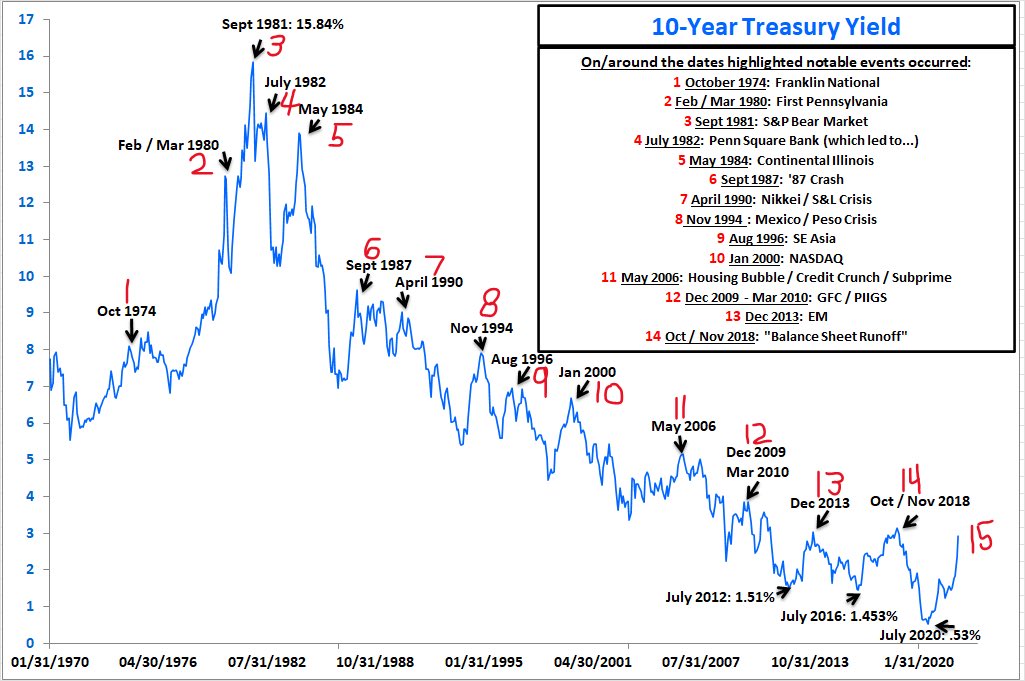 Some of those will be unfamiliar to those who aren't students of market history, but they were all significant blow-ups in financial markets at the time. Some of them had direct (nasty) implications for the stock market, while others didn't. The point is it's rare for rates to adjust higher this rapidly and not have it turn into something dramatic for financial markets.

Poised to pull the third lever

I mentioned three levers that modern central banks use, the third being Quantitative Easing and Tightening. This lever — and its role in the inflation battle about to be joined in earnest by the Fed — is a primary focus of the May SMI cover article.

Look for that later this week!