Home > Articles >Why Momentum Investors Should Hang in There

Why Momentum Investors Should Hang in There

Most of SMI's investing strategies are built on the principle of momentum. Simply put, momentum is the idea that investments which are currently performing well tend to continue performing well, at least in the short-term. The opposite is also true: those investments that are performing poorly typically continue to be poor performers.

Momentum is one of the most studied investing concepts, certainly of the past few decades. Numerous academic studies have been done on all types of momentum, and the findings have repeatedly confirmed that momentum investing works over the near-term (which is typically defined as periods of one year or less).

As the above link clearly demonstrates, this isn't just SMI saying this — these are premier academic researchers arriving at this same conclusion. In fact, some of momentum's highest praise comes from those who specifically wish momentum didn't work. Consider Eugene Fama, a Nobel winner in Economics who is best known for his work promoting the Efficient Markets Hypothesis, which argues that investing factors like momentum don't work (or at least they shouldn't). So you can bet he's looked at momentum every which way. Yet he's said, "The premier market anomaly is momentum. Stocks with low returns over the past year tend to have low returns for the next few months, and stocks with high past returns tend to have high future returns." And in the July issue of SMI, Matt included another quote from Fama acknowledging his inability to explain away momentum's success: "“Momentum is a big embarrassment for market efficiency.”

So momentum is great and momentum has been proven to work. Which leaves us with just one tiny problem. As long-time SMI readers can attest, momentum hasn't worked all that well lately.

Now, to be fair, there are many ways to apply momentum, and some of them have worked fabulously in recent years. Sector Rotation, for example, is an SMI strategy based on momentum that has gained 50% over the past year (thru 5/31/17), and averaged 30% gains per year over the past 5 years. Obviously no problems with momentum there!

But while Sector Rotation has been awesome, Dynamic Asset Allocation has scuffled along the past couple years. And SMI's old "flagship" momentum strategy — Stock Upgrading — has underperformed the market for much of the past decade (after running laps around the market's performance the decade prior to that).

While there are any number of reasons we can suggest as potential reasons why momentum has lost its mojo in recent years, the main question investors want answered is this: Is this is a temporary condition or a permanent change?

To that end, columnist Mark Hulbert wrote an article for The Wall Street Journal last month titled "Why Investors Shouldn’t Give Up on Momentum Investing." The article acknowledges the difficulties that momentum strategies have had over the past decade. For example, our friends Fama and French have found that the highest momentum stocks beat the S&P 500 over the past decade by less than one-fifth their average interval of the past 90 years.

More importantly, Hulbert looks at reasons why momentum is unlikely to be dead, and why momentum investors should be optimistic that this has just been a rare period of underperformance for the strategy. He notes the stunning long-term performance, both of momentum stocks generally (top decile of momentum stocks have beat the S&P 500 by 6.6% annualized from 1927 to March 31, 2017) and momentum newsletters, like No-Load Fund-X, which has beat the market overall during the 35 years of data that Hulbert has been tracking it, despite the weak past decade.

However, I found the following excerpt to be the most persuasive part of the article: 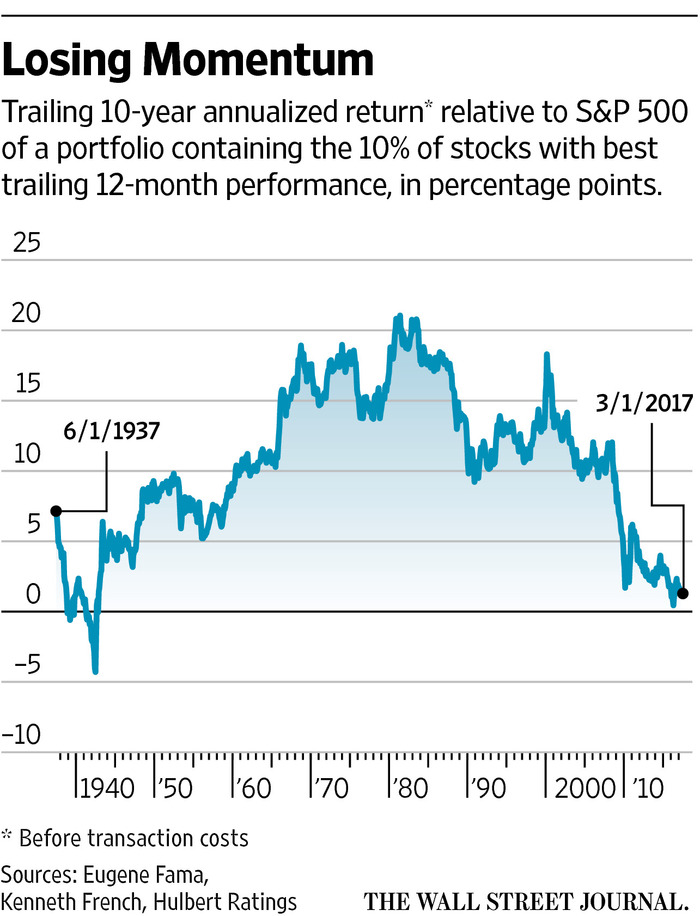 Also, a decade of disappointing performance isn’t unprecedented for momentum strategies. Something broadly similar occurred in the late 1930s and early 1940s, according to Kent Daniel, a finance professor at Columbia University who has extensively studied momentum strategies. (See chart.)

So, as frustrating as recent experience has been, it isn’t a reason in itself to conclude that the momentum strategy has permanently stopped working, Prof. Daniel says in an interview.

The fact is, momentum has suffered similar stretches of subpar performance before, only to bounce back and continue to produce the type of superior performance noted by the long-term research (most of which happened after this prior period of momentum weakness). It's also interesting to me that this other prior stretch of notable underperformance came in the decade following the last major financial crisis. I don't have any evidence to connect those crises (1929, 2008) with their subsequent periods of momentum weakness, but the timing is at least curious.

At any rate, momentum pulled out of that earlier extended funk, and there's every reason to believe it will do so again this time. The article goes on to quote other researchers as saying they haven't been able to detect an increase in the amount of money following the high momentum stocks in the past couple decades, which would be worrisome if they had found it to be true. But because it's not, and because human nature is unchanged, momentum investors can reasonably hope that their underlying strategy choice is sound.