In tumultuous times, gold typically assumes the role of a safe haven. This time, not so much.

Or perhaps we should say, "Not yet."

As you may know, gold enjoyed a strong run-up the weeks and months before the pandemic. That robust performance is now making gold the victim of its own success.

Here's an explanation form George Milling-Stanley, chief gold strategist at SPDR (the company that runs the GLD exchange-traded fund). He spoke with ETF.com:

Milling-Stanley: ...The issue is a lot of investors had bought equities on margin. When the value of the equity drops 7% or more in a day, they face calls for additional margin because their investments are worth less than they were before.

But rather than selling their equities in order to meet the calls for additional margin, they sell something that has held its value, which at that point is gold. They use the proceeds from sales of gold to meet the cash margin calls on their equities....

ETF.com: Had gold not been a strong asset — it rallied significantly in 2019 — would it still be the No. 1-choice asset to be liquidated when investors need to come up with cash?

Milling-Stanley: That last summer we broke out of the top of a trading range that had been in force for six straight years is very important. Gold is a much more valuable asset the higher its price, allowing people the ability to sell less gold to meet those cash margin calls.

Another thing worth saying is the fact that gold is a very deep and liquid market. That has also been something that came to the rescue of investors. For example, it’s more liquid than timber land or real estate or private equity, or many other so-called liquid alternatives. Gold is the original liquid alternative, and probably the most efficient liquid alternative out there.

Here's is what the run-up and subsequent decline in GLD looks like (chart begins four months ago, in mid-November 2019): 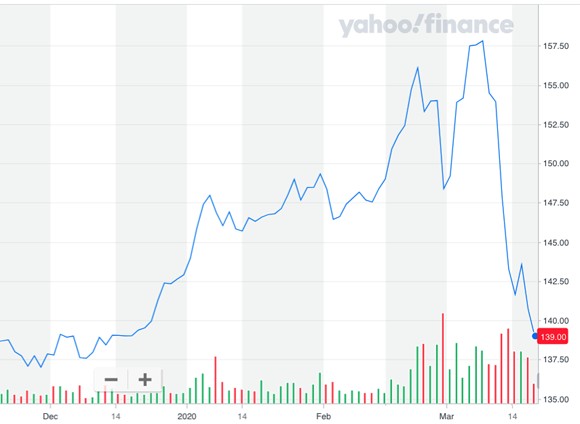 As investors with gold holdings have rushed to raise cash, GLD has borne the brunt of redemptions. Here's why:

ETF.com: Asset flows show that redemptions have been happening primarily in the biggest, most liquid gold ETF, GLD. It’s not in competing funds such as the SPDR Gold MiniShares Trust (GLDM)...or the iShares Gold Trust (IAU). Does that speak to trading liquidity?

Milling-Stanley: Exactly. GLD is by far the most liquid gold ETF out there. There's no question it's still the 800-pound gorilla. The total amount of gold backing physical gold ETFs around the world currently stands at around $140 billion to $150 billion. GLD alone is more than one-third of that....

ETF.com: Aside from cash flow needs, should we expect gold ETFs to attract more assets from here?

Milling-Stanley: Unless there is renewed pressure from the equity markets — which might postpone a recovery in gold prices and postpone inflows into the ETFs — we're going to see gold prices recover, and money move back into GLD in more force than they had been, if history's any guide.

That view tracks with what SMI executive editor Mark Biller wrote in a post last week: "Gold has generally been a good performer overall during past bear markets, but sometimes does sell off along with other assets during the early 'liquidity crunch' phase that we're still experiencing."

We can't know how long this liquidity-crunch phase will last, but it can't go on indefinitely.

The takeaway here is that the decline in gold is likely due to short-term factors, not to any change in the typical non-correlation between gold and equities in times of market distress.