Home > Articles >When Will the Clock Run Out on the Indexing Advantage?

When Will the Clock Run Out on the Indexing Advantage?

Proponents of passive investing (also called indexing) are making the most of the current bull market, pressing the theme that it's all but impossible to beat the market anymore. But is that really the case?

Given that it's now been more than three years since the last 10% correction, investors (and advisors) have largely forgotten what stark fear of imminent loss feels like. Meanwhile the stock-market indexes have run ever higher while actively managed funds have struggled to keep pace. 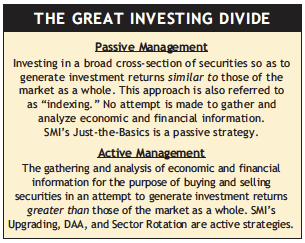 However, there's more to this story than meets the eye. It's quite possible that indexing is experiencing a "golden age" of sorts. The reason for this is twofold.

First, the largely uninterrupted bull market that has run since March 2009 tilts the current 3- and 5-year comparisons strongly in indexing's favor. That's because indexing strategies typically fare better than actively managed strategies during bull markets. Why? One significant reason has to do with the amount of cash actively managed funds hold to meet redemptions or that simply hasn't been invested yet. Such funds typically hold 2%-4% of their assets in cash, even when they aren't purposely trying to use cash as a defensive tool. Clearly, cash in the portfolio is going to hold back performance when the market is rising. Compare this to index funds which tend to be fully invested in their target index components at all times.

And second, the bear market of 2008 was highly unusual in that virtually all types of stocks fell rapidly together. Normally, bear markets work against index funds because they have no way to put on the brakes and take defensive measures. In 2008, however, active managers were almost in the same boat. It was a "nowhere to hide" type of bear market that unfolded so quickly and was so sweeping in its scope that active managers weren't able to limit the damage in their usual way. The typical advantage enjoyed by active managers in weak markets was nullified.

This is illustrated in the table below, which shows the performance during the past two bear markets of SMI's Just-the-Basics strategy (JtB), which is based on index funds, and Upgrading, which is based on actively managed funds. It's evident that while JtB suffered comparable losses in both bear markets, Upgrading's cumulative loss during the recent financial crisis was roughly double that of its loss in the 2000-2002 bear market. Why? Because between September 2008-March 2009, everything plummeted at the same time as liquidity and confidence disappeared.

That isn't usually the case, as the 2000-02 bear market illustrates. In the earlier bear market, certain segments of the market — such as small-company and value stocks — provided some refuge from falling prices.

Historically, actively managed funds have tended to lag indexing during bull markets, then catch up on a relative basis during bear markets. When a bear market comes along that doesn't allow active management to recover on a relative basis — such as in 2008 — it skews the numbers in indexing's favor for a time. As a result of that unusual bear market, not only do the recent 3- and 5-year numbers tilt in indexing's favor, as they usually would five years into a bull market, the longer-term 10-year numbers also tilt further in indexing's favor because there's been no "normal" bear market in the 2004-2013 period to allow active managers to even things out.

However, as the table shows, in the 2000-2002 bear market, the ability of Upgrading to actively "manage the managers" really paid off. Some managers rose to the top of our momentum rankings, either due to significantly raising their cash holdings, altering their mix of sectors and companies, or more likely a combination of the two. Those were the managers who made it onto Upgrading's recommended list.

While the table indicates that Upgrading still has a role to play in limiting damage during bear markets, what's obviously the most striking is the performance of our newer Dynamic Asset Allocation (DAA) strategy. (These are backtested numbers based on the mechanical buy/sell decision rules.) Those numbers clearly show the value of DAA's ability to side-step the falling stock market during times like these, leading to only slight losses in the most recent bear market and fairly significant gains during the 2000-02 bear market.

Given these arguments, we still believe that those concerned about protecting their capital during the next bear market are likely to be better off in SMI’s primary actively managed strategies: Upgrading and DAA.

While there's a lot to like about an indexed investing approach such as Just-the-Basics, we think that the indexing proponents are stretching the argument a bit these days based on some unusual recent circumstances. Take their conclusions with a grain of salt, and think critically about the conditions that have led to them before making any significant changes to your portfolio or long-term investing plan.