"Older Americans — including current and future retirees — appear to have a meaningful lack of knowledge about Social Security."

So reads a news release from the Nationwide Retirement Institute (funded by Nationwide Insurance), describing the results of a recent Harris Poll.

Future retirees (i.e., those retiring within the next 10 years) expect to receive $1,805 a month in Social Security benefits, but retirees currently collecting Social Security receive $1,408 a month on average — a 28% difference. Additionally, more than one in four older adults (26%) believe they can live comfortably in retirement on Social Security alone....

[S]even in 10 older adults (70%) believe they are eligible for full benefits before they actually are...and 26% think if they claim early, their benefits will automatically go up once they reach full retirement age.

These are serious errors in knowledge — errors that will run headlong into financial reality.

The online poll of 1,315 adults ages 50 or older — about two-thirds of them already retired and the rest planning to retire in the next 10 years — also found that nearly half (44%) say Social Security either is or will be their main source of retirement income. "If you think about how many are relying on Social Security to be their main source of income, it really is scary," says Tina Ambrozy, Nationwide's president of sales and distribution. 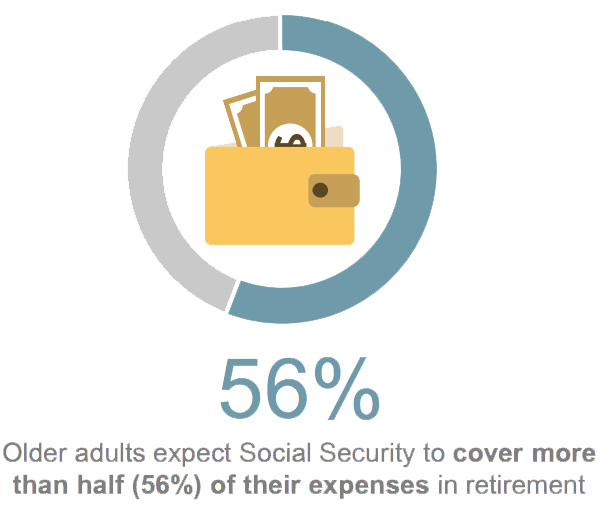 Just last week, I was helping a friend look at living-arrangement options for her later years. Social Security is her primary source of income. Thankfully, her benefit is above average — closer to $1,800 a month. But still, the least-expensive apartment at the "independent living" facility she wants to move to is $2,000 a month — more than her entire SS benefit.

She also has a small pension, but even Social Security and the pension together may not provide enough for her total living expenses.

In all, the results of the poll — which are not surprising — tell us that many older Americans are financially ill-prepared for their later years.

One reason we developed our Multiply small-group study is to help people who are still years from retirement understand the issues and take steps now to start preparing for the future.

Regrettably, many people never engage on these retirement-financing issues until they are nearing retirement age. By then, they no longer have the opportunity to take advantage of many decades of compounding returns in personal retirement accounts (such as IRAs and 401(k)s) that can build wealth over time and help ensure greater financial security in one's later years.

Learn more about how you use Multiply at your church or with your small group. You could make a huge difference in someone's life.