When I was a kid, there was always a certain allure to the "Grab bag" — the mysterious bag-o-stuff that didn't reveal its contents until after you bought it. As an avid young football card collector, I recall bouts of distress debating the virtues of buying a card I could see in advance vs. the mystery and potential riches of the grab bag!

This post may not be as exciting as a 1970s Football Card grab bag. But I'm a constant accumulator of "interesting financial stuff" that I plan to write about someday. Today, I'm going to rapid-fire through several of those topics in a single post. Hope you enjoy it!

Foreign stocks: Most undervalued in decades

Here's a double feature from Meb Faber on the huge valuation gap between foreign and U.S. stocks: First this tweet:

Over the past 70 years the US stock market has been a darling, outperforming foreign stocks by 1% per year.

Want to know how much of that outperformance has come since 2009?

And second, his article "The Biggest Valuation Spread in 40 Years?," which explains that from 1980-2008 (almost 30 years), there was no persistent valuation premium given to U.S. Stocks. One would outperform the other, then the dynamic would reverse, but there was no "built-in" premium. This counteracts the claim that U.S. stocks always trade at a premium to foreign stocks and deserve to.

With that in mind, it's a little shocking to see that — after a decade of U.S. stocks dramatically outperforming foreign stocks — the long-term CAPE ratio of U.S. stocks is 29, while average global CAPE is 16. For 30 years there was zero long-term premium, but currently U.S. stocks are almost twice as expensive? Hmm. Probably want to make sure foreign stocks are well represented within your portfolio in the years ahead. (Admittedly, this dynamic has been in place for a while already...) 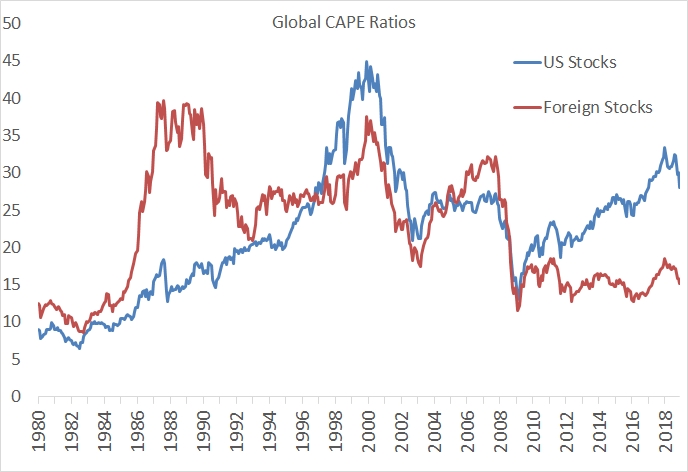 Last week, I mentioned in the DAA monthly update that the "everything bubble" had resumed inflating in January following the Fed's reassurance to the financial markets. This graphic from Deutsche Bank shows just how true that was. Virtually every type of financial asset went up last month, even those that typically don't move in the same direction together.

Richard Vodra, writing for Advisor Perspectives on steps financial advisors should take to make sure their advice really makes sense for their clients, writes the following, which has important implications for SMI members using MoneyGuidePro® to model their own financial planning:

The final step in any calculation is asking whether the result makes sense. Should an investor really have 57% of their money in stocks rather than “about 60%”? Despite the software output, is it possible to save 43.4% of income to meet a retirement target, or accumulate 25 times one’s income by retirement day? Will a pension fund really average 5% real growth with a blended investment mix, for decades to come? Will carbon emissions really continue to grow by 3% per year through the end of the century? Should our client sharply reduce current consumption so they will have plenty of money at age 98?

In all these cases, think through the meaning of the results of your calculations in terms of the real world, and be prepared to explain them in those terms. Talk about uncertainty, false precision, variability, and how you can make adjustments when the future turns out to hold the surprises you know will be there, even if they cannot yet be identified.

The point being to take a step back at the end of the process and broadly ask, "Does what I just modeled actually make sense?" And directly related, recognize what key assumptions support the results the software is delivering to you. Those assumptions likely won't unfold exactly as your plan expects — some results may be better, others worse. Which is why it's so important to regularly revisit your plan and update it with the latest current information to make sure you are still on track. Planning is a "living exercise," not a once-and-done event.

The experts don't know either

And since Richard Vodra's article is so good, we're going to excerpt a second point from it, namely that the experts don't know what's coming either. Keep this in mind as the arguments over future recessions and other economic/market events heat up.

For many years the Wall Street Journal started each January and July asking more than 50 economists — in academia, banking, consulting, and elsewhere — for their forecasts, 6 and 12 months out, of the levels for a group of economic indicators including short- and long-term Treasury rates, inflation, economic growth, oil prices, and the dollar versus yen exchange rate....

When I looked at the results from 1990 to 2003 (when I dropped the project), for each report there was at least one category where the actual number was outside the range of guesses (or of all but one extreme guess). Not that the average was wrong, but basically nobody got it right....

Today’s experts have not improved. In January 2018, the Journal (which now does this monthly) asked its panel, among other things, to forecast oil prices. The guesses for June ranged from $45 to $70 a barrel — the actual price on June 30 was $74.15. At the start of July, they asked again for a year-end projection. The range was $57.60 to $81 — the actual price on December 31 was $45.41. (The July panel also all missed the rise in the Fed funds rate and the slowing in the growth of the CPI.)

Back in 2014, I wrote about one example where 67 economists all agreed that interest rates were going to rise over the next six months, only to have the 10-year Treasury rate fall dramatically from 2.73% to 2.21% (see 100% of Economists: Dead Wrong.)

Sometimes it can be comforting to think some expert has figured out "the system" and knows what's coming next. Unfortunately, it's just not true.