The first two quarters of 2015 were noteworthy for the unusual lack of volatility — the S&P 500 stock index traded in one of the narrowest ranges ever recorded through the first half of the year. But, as often seems to happen, what followed in the third quarter made up for that lack of excitement, and then some.

Heading into August, it had been four years since the stock market’s last 10% “correction” (retreat from a previous high). Given that such corrections typically happen about once a year, it’s easy to say the market was simply overdue. But when the major stock indexes opened down 6%-8% on the morning of August 24, it was difficult for anyone to easily dismiss what was happening.

The damage was swift and sudden — and mercifully brief. Investors couldn’t know it at the time, of course, but the correction would end within two weeks. Stocks rallied a bit in September (before retesting the correction lows at the end of the month). As we discuss in Don't Look! Blissful Ignorance Can Be Your Investing Ally, the correction was so rapid that investors who weren’t tuned in to the short-term gyrations of the market might not have even realized anything significant had occurred.

In August, we made a change to how the performance of the SMI strategies is reported. While we no longer include the detailed performance table at the bottom of these quarterly-report articles, we’ve begun including a new performance table on the back cover of each monthly issue issue (it’s also available on the homepage of the SMI website for members who are logged in — look for the "Performance" tab just below the four small pictures). This new table includes almost all of the information the old table used to report quarterly, but expands it to include all of SMI’s strategies and is updated every month. Referring to that table may be helpful as you read the rest of this article.

As you might expect from a period that culminated in a 10% stock-market correction, it wasn’t a great quarter for SMI’s stock-oriented strategies on an absolute-return basis. While the overall stock market (as measured by the Wilshire 5000 index) was down -6.9% for the quarter, the real story was even worse. The larger stocks that dominate those broad market indexes held up better than smaller and foreign stocks. So diversified portfolios tended to do even worse than those “market” losses.

Digging into the Just-the-Basics components reveals the challenges faced by better-diversified portfolios during the third quarter. The U.S. large-companies stock component was down -6.5%. But the small and mid-sized stock holdings declined -10.5%, while the foreign component lost -11.5%. Taken together, then, JtB lost -9.1% during the quarter.

Upgrading faced the same challenges, being diversified across foreign and small-company stocks as well. It fared better than the JtB indexing strategy, declining -7.5% for the quarter. While that was slightly worse than the loss of the broad market index we use as Upgrading’s benchmark (-6.9%), we’re reasonably pleased that Upgrading was able to limit our losses to the degree it did, given how poorly foreign and smaller stocks fared. Upgrading remains ahead of both the market and JtB through the first nine months of 2015, though all have lost ground year-to-date.

As is often the case when the stock market hits sudden turbulence, investors “fled to safety” and found refuge in bonds. This dynamic pushes bond prices higher and interest rates lower. As we’ve taught many times, the degree of such moves is typically more pronounced the longer the term of the bond (or “duration” of the bond fund), so longer-term bonds tend to see the greatest impact from these types of shifts in interest rates.

It was unfortunate, then, that the Upgrading portion of our bond portfolio was positioned in high-yield bonds as the correction unfolded. High-yield bonds tend to react more to what’s happening in the stock market than other types of bonds, and posted a small loss in August (-0.9%) while most other bonds were rising. Thankfully, we were able to change that holding at the end of August, prior to high-yield bonds losing even more in September (-2.1%).

That said, half of our Bond Upgrading portfolio is invested in a “core” blend of bond funds that doesn’t change, and this part of the portfolio held up well. Altogether, the Bond Upgrading portfolio gained 0.7% for the quarter. While lower than the bond-market benchmark (and the long-term bonds tracked in Dynamic Asset Allocation), this still shows the beneficial impact of diversifying a stock-heavy portfolio with bonds when the markets falter.

This was a transitional period for DAA, as the portfolio started the quarter invested in both U.S. and Foreign stocks and ended it having exited both. Despite the turnover, DAA finished with a smaller quarterly loss than the market, JtB, or Stock Upgrading. 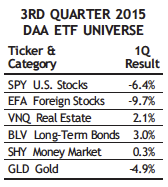 The quarterly returns of the six asset classes tracked by DAA show both the immense potential of the strategy — and the reason why it has been frustrating that DAA’s overall returns haven’t been better so far in 2015. During the third quarter, three of the asset classes posted solid, positive returns while three experienced significant losses. The potential was there for the strategy to have a great quarter despite the stock market correction, if its holdings had been aligned with the market’s trend.

The important point to recognize is that historically, these types of trends have lasted long enough, often enough for DAA to profit from them. But because DAA is a trend-following system, it takes a little time for the strategy to transition to the asset classes newly in favor when the broader trends shift. This year has been frustrating for all of us as we’ve watched DAA seemingly be a step behind each market turn.

All of which is to say that DAA wasn’t perfectly aligned with the market’s trend. Ideally, we wouldn’t have been in stocks at all. But it’s important to keep the context in mind. Going into August, the stock market was only 2% below its all-time high. If asked how we would want DAA positioned when stocks are within 2% of their all-time high, we would answer that we’d want to be maximally invested in stocks! Given how sudden the market correction was, we’re fortunate that DAA was able to limit our losses at all. (See How Short-Term Thinking Can Derail Long-Term Success for more on what DAA does and does not protect us from.)

As we warned when we first explained the strategy, DAA is going to produce some frustration from time to time. It may aggravate us again in the fourth quarter, if the stock market bounces back after falling so fast in the third quarter (which would disappoint DAA investors who got completely out of stocks at the end of September). But while it’s going to get some of these short-term moves wrong and irritate us occasionally, as long as it does what it’s supposed to do and catch the big trends correctly, those who stick with it are likely to be exceedingly pleased with it overall.

Let’s briefly review the “big picture” of the few years DAA has been active. It kept us exposed to stocks during 2013 and 2014 and produced double-digit gains both years. This year, when the stock market looked particularly vulnerable to significant declines for the first time since DAA was launched, and in fact delivered the market’s first 10% correction in four years, DAA quickly got us completely out of stocks.

Remember the original goal of the DAA strategy: solid upside during rising markets, and reasonably fast protective action as downside risk increases. DAA won’t always handle every market wiggle perfectly, and managing it manually isn’t going to be the best choice for every reader due to the emotions created by doing so. Still, we think DAA is a great option for those who want to retain stock-market exposure, while doing so in a way that attempts to protect against major losses.

Sector Rotation had one of its all-time worst quarters, losing -19.8%, with all the damage occurring during the last two weeks of the quarter. On September 21, Hillary Clinton tweeted about drug-company price gouging and a plan to take it on, and biotech stocks went into freefall. Starting that day and extending through the next six trading sessions, our SR holding lost a stunning 21.8%.

We constantly warn about the high-risk, high-reward nature of SR and why we recommend limiting its role in your portfolio as a result. But an experience like this drives the point home in a way no amount of preaching can. It’s a horrible feeling to watch 20% of your capital burn up in barely over a week’s time. On the flip side, SR is still sporting a 26.3% annualized gain for the past three years, even after that horrible loss. (Said differently, SR has still more than doubled our money over the past three years, despite the recent 21.8% loss.) The upside is obvious, just make sure that you’re limiting your exposure to a level where you can handle this type of occasional, significant loss.

This oddly titled portfolio refers to the specific blend of SMI strategies — 50% DAA, 40% Upgrading, 10% Sector Rotation — examined in detail in our May 2014 cover article, Higher Returns With Less Risk: The Best Combinations of SMI’s Most Popular Strategies. That article found this combination of strategies has worked synergistically in the past to boost returns while simultaneously reducing risk — a great combination. It accomplished this by adding the high upside of SR and the volatility-dampening properties of DAA to an Upgrading base. (We report the results of this portfolio as if the Upgrading portion is invested 100% in stocks — no bonds. But if your risk temperament and season of life call for you to blend stocks and bonds in the Upgrading portion of this portfolio, then by all means do so.)

This is the first year we’ve tracked and reported the performance of this blended portfolio. In the first quarter, we saw the benefits of blending these strategies, as SR fell while DAA and Upgrading rose. During the second quarter, we again saw the benefits, although in a different way — SR’s strong gain helped offset an unusually weak quarter by DAA. And in the third quarter, it was the more traditional “down market” result that we might expect: DAA losing less than the market, Upgrading with losses close to the market’s loss, and SR turning in larger losses (although we wouldn’t normally expect SR losses to be so extreme).

The performance of the three strategies will vary significantly at times, but a portfolio diversified among them will smooth the ride along the way. Whether you’re using this specific 50/40/10 blend or a different allocation combination tailored to your specific risk preferences, we think many SMI readers can benefit from combining these strategies in some fashion.