Home > Articles >They Don’t Ring A Bell At The Top

They Don’t Ring A Bell At The Top

"In hindsight, the signs were obvious to anyone paying attention. Years of quantitative easing had pushed prices for financial assets to unsustainable highs, while simultaneously pushing bond yields to ridiculously low levels. Who could have reasonably looked at negative yields on German Bunds extending as far out as eight years — or negative interest rates on Swiss bonds extending for as long as 12 years — and not considered it madness?"

Someday relatively soon, we'll be reading postmortems similar to that regarding the current bull market. Today is a good time to be reminded of that, given the S&P 500 and Nasdaq stock indexes are trading at all-time highs.

The question, of course, is when? Is 2015 the rough equivalent of 2005 (with a couple of good years left for the markets)? Or is today closer to 2007/2008 (with the beginning of the next bear market just around the corner)?

As the old saying goes, they don't ring a bell at the top you know.

I was reminded of this today while reading The Biggest Threat To Your Portfolio by Joshua Brown. He makes the point that it's pretty futile trying to figure out what the catalyst of the next downturn will be in advance when we typically can't even identify the reasons for past bear markets even in hindsight.

What happened on the day in March of 2000 when the Nasdaq stopped going up? Nothing, it just did.

What was the proximate trigger for the crash of ’87? There wasn’t one.

Why did the stock market ignore the real estate bust for 18 months until one uneventful day at the end of 2007 when all of a sudden it stopped climbing and reversed? We don’t know to this day.

What happened during the week after Labor Day in September 1929 that put the top in on the stock market? Nothing of note besides a bearish speech by Roger Babson a thousand miles away that may or may not have been noticed by traders on the floor.

People don't like hearing it, but bull markets often simply keep going up until they don't. Same with bear markets. There isn't always an event, or reason, why the market changes course. Sometimes there's an event that triggers a change, but often there isn't.

There are probably many takeaways we could lift from that, but I'll settle for two.

Second, the markets have rewarded this kind of discipline. Brown included the following chart in his article, courtesy of Dimensional Fund Advisors. It's a great reminder that an investor who made absolutely no effort to adjust their holdings in response to market events would have still done extremely well over the past four decades. 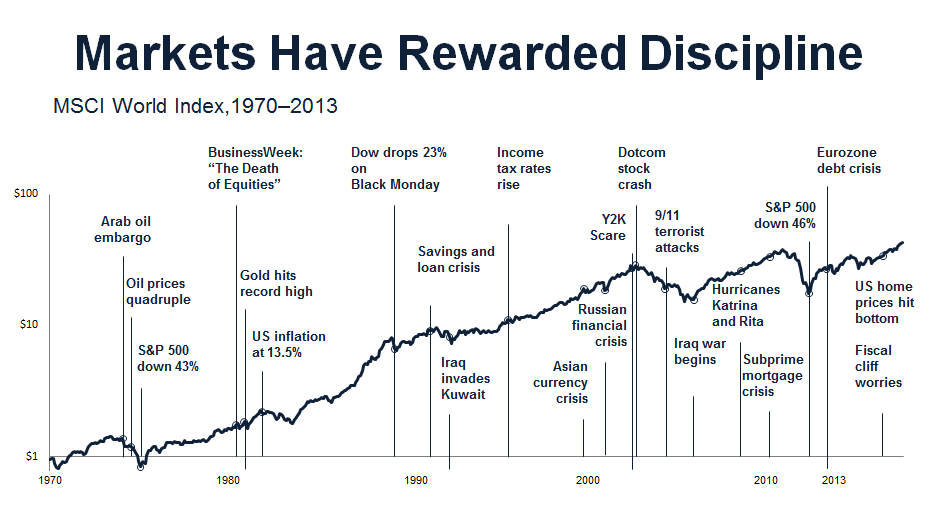 That said, recognizing the futility of trying to predict future market turning points isn't quite the same thing as deciding to never alter your investment mix again. There's still a place for making small adjustments to your plan based on a rough reading of where the market seems to be in the bull/bear cycle. SMI doesn't try to predict market turning points, but we do sometimes encourage readers to be either more or less aggressive in response to the market's recent behavior. For example, at the worst of the declines in 2002 and 2008, we encouraged readers to stick with their stock holdings, suggesting that we'd rather be a buyer than a seller in those conditions. And this year we've written about how starting to shift to a lower-risk posture might be a good move for those with high risk exposure in their portfolio.

Still, the most important element — by far — is crafting a personal plan you can live with through bull and bear markets alike. Tweaking that plan occasionally may have a place, but it's never a substitute for having your portfolio set up pretty close to "all-weather" condition in the first place.

If you're concerned that your investing plan might not hold up well during the next bear market, now is the time to do something about that. SMI's more defensive-oriented strategies like Dynamic Asset Allocation and Bond Upgrading can help.

01/08/15 | Comments
Should My Strategy Mix Change As We Move Through Bull/Bear Market Cycles?
By Mark Biller