The Stock Market in “3D”

In this case, the three dimensions are the various time frames one should consider when thinking about investing in stocks. The outlook for stocks over the short- or intermediate-term may be very different from the long-term outlook. It’s important to have some understanding about each time-frame so one can have reasonable expectations, which leads to better emotional control and less risk of damaging decisions as the market travels its often bumpy path.

Historically, no other asset class has grown like stocks. Over the past century, stocks have grown at a roughly +10% annual clip — significantly higher than other asset classes (for example, government bonds have earned ~5.5% annually, real estate ~3.8%, cash ~3.4%). But those stock-market returns come with a significant amount of volatility, which produces a “two steps forward, one step back” type of path.

That sounds reasonable enough in theory, but as anyone who lived through the -50% financial crisis losses a decade ago will attest, those “step back” periods can sorely test one’s emotional fortitude! That’s why it’s crucial that investors understand the market’s normal patterns. Full-blown bear markets with losses exceeding -20% tend to come along at least once per decade or so, while market corrections of at least 10% have occurred roughly every other year, on average. SMI has long recommended that investors have at least a five-year investing horizon when investing in stocks; 10 years is even better. Sometimes it takes that long for stocks to recover the ground they lose during deep bear markets.

Still, if you want to grow your investment capital at a rate significantly higher than inflation — which most people need to do to build up a nest egg capable of helping carry them through their later years — allocating at least part of your portfolio to stocks is usually necessary. Most investors with longer than 10 years to invest should allocate the majority of their portfolio to stocks, while those with less than 10 years before they begin drawing down their investments should scale back their stock exposure. SMI members can find step-by-step guidance on how to determine an appropriate personal stock/bond allocation in the Start Here section of the SMI website.

It’s helpful to recognize that the longer one’s investing time frame, the more predictable the expected returns from stocks become. The opposite is also true: over the short-term, there is little rhyme or reason to the market’s returns. The more willing you are to accept this fact, the easier investing becomes, because you can stop agonizing over every news item and its likely impact on stock prices.

The table below illustrates this long-term/short-term difference vividly. Note how over any given one-year period (left column), the range of investment outcomes is spread widely across the six groups, with many periods of +20% gains, -20% losses, and everything in between. But over 10-year holding periods (far right column), the returns cluster together in just two groups, with 98% of 10-year periods providing positive returns, and 70% of those periods generating returns +10% or better. 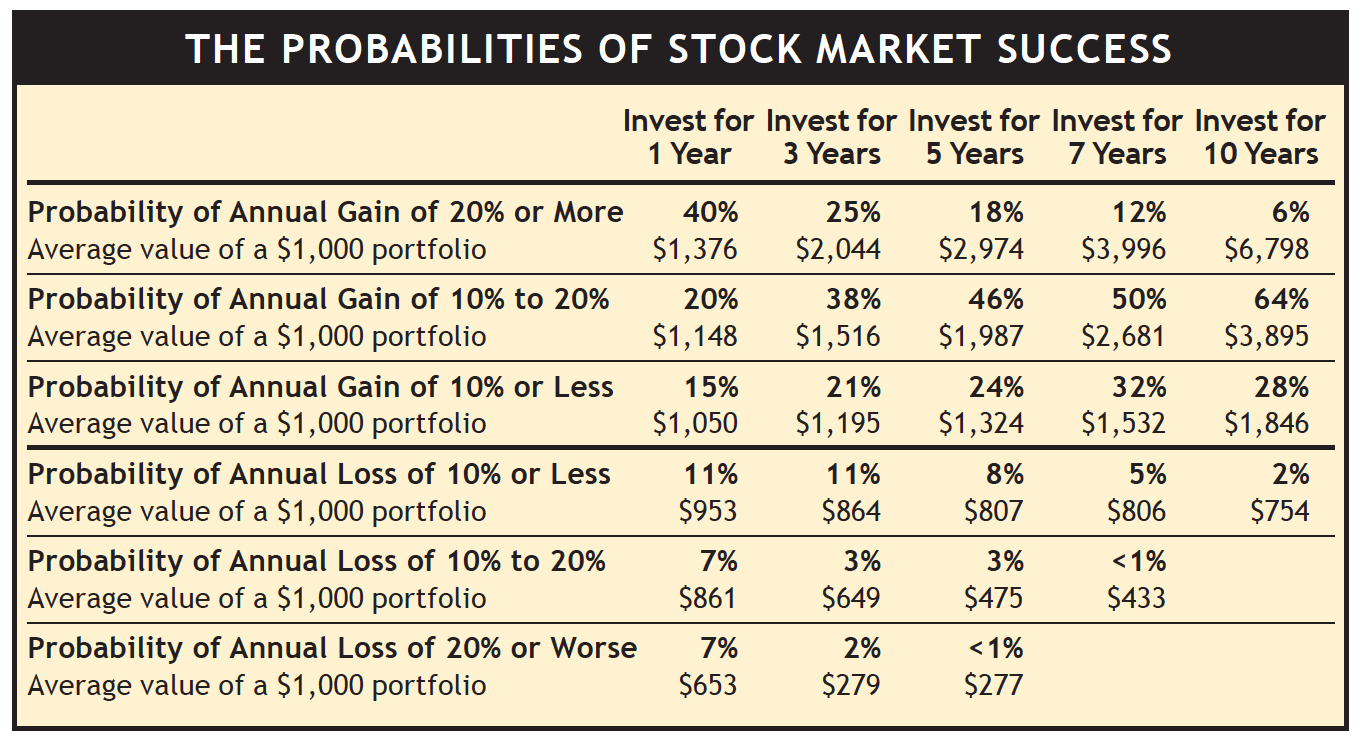 As we’ll discuss in a moment, we believe the market is providing strong clues as to its likely behavior over the intermediate-term (3-10 years). And we’ve already covered how investors can feel reasonably confident about the market’s long-term (10+ years) prognosis, based on the historical consistency of its past long-term performance.

But the short-term? Who knows? SMI’s many decades of combined investing experience has persuaded us that consistently predicting what the market will do next is impossible.

As investors, we have to accept that the short-term is unpredictable. That’s why SMI focuses on building long-term, all-weather portfolios that adapt to market changes. In other words, you should already be in a portfolio that you can live with through a market downturn, because one could begin at any time. But at the same time, your portfolio should be able to participate in any continuing market upside, because that could just as easily be the immediate path forward.

That’s a tricky balance, for sure. Thankfully, SMI provides strategies (Dynamic Asset Allocation and Upgrading 2.0) specifically designed to shift along with the market. These strategies provide both upside participation and downside protection based on mechanical signals that respond to the market’s cues, so no predicting of the future is necessary.

We’ve established that the short-term market outlook is utterly unpredictable, while the long-term outlook can be anticipated with a fair degree of certainty. What about the intermediate “in-between” period?

This is where the market’s current valuation provides significant insight, particularly when those valuation measures reach historical extremes. Valuation tells us very little about what the market is going to do in the short-term, because a cheap market can always get cheaper and an expensive market can always get more expensive. So valuation is a poor short-term timing device (another reason why the short-term is inherently unpredictable). But market history shows that valuation is a great predictor of what the market’s returns are likely to be over the next decade or so.

SMI has written extensively about how today’s market valuation indicators clearly show that stocks are very expensive by historical standards. By some metrics, stocks are more expensive than they’ve ever been, with the lone exception of the dot-com bubble peak in 1999-2000. The key takeaway is that today’s market valuation has historically been strongly correlated with future returns of 0-2% annualized over the next 7-12 years (depending on which measure is used). Yuck!

That’s hard for some to believe (as these projections always are near bull-market tops), but it’s based on decades of past market performance. Recent precedent certainly backs up that type of pessimism. Consider that on April 1, 2000 (near the last comparable valuation peak), the S&P 500 traded at roughly 1,500. A decade later, on April 1, 2010, the S&P 500 traded at 1,030. That’s more than a year into the new bull market — remember that the S&P hit its ultimate low of 666 in March 2009, nearly nine years after that dot-com bubble peak. That’s a long time to go without gains (and thankfully SMI readers didn’t have to — Upgrading gained +6.0% annualized over that same decade).

We’ve said for years that the current bull market wouldn’t end until the Federal Reserve raised interest rates enough to choke off the economic recovery. Consider this, written in May 2014:

...I expect this bull market has further to run before its done. For the past few years I’ve been arguing that this bull market has been driven primarily by the Fed’s easy money policies. The Fed has gone further with their zero interest rate and quantitative easing policies than any Fed ever has before, and as a result, I’ve expected this bull market to go higher and last longer than most would believe. That’s simply based on looking back at past examples of Fed largesse and extrapolating based on their recent, even more over-the-top behavior. I’ve written a number of times that I don’t think this bull market will end until that monetary policy begins to tighten. And while the winding down of the Quantitative Easing programs could be interpreted as the beginning stages of that tightening, even after that stimulus ends, we’ll still have interest rates at nearly zero. So I think we have a ways to go yet before this bull is finished. (emphasis added)

Unfortunately, today we’re at (or at least near) the point we’ve long been awaiting and discussing. The Fed has boosted short-term interest rates from roughly zero to nearly 2% already, while communicating more rate hikes are planned. Consider that the Fed has undertaken 13 rate raising cycles in the past 70 years. Ten of those 13 have resulted in economic recessions. Combine that fact with today’s extreme stock valuations and it’s easy to see why our investing narrative has gradually shifted away from a primary focus on maximizing growth to preserving capital.

The stage is set for stocks to underperform their long-term averages, probably dramatically, over the next decade or so. We don’t know the path that will take: with no signs of recession on the horizon yet, it’s plausible the market could shoot higher still in a “melt-up” to the final top. Again, the short-term is inherently unpredictable. But the intermediate-term is relatively predictable, because today’s high valuations paint a clear historical picture of what total returns are likely to be over the next decade or so as a whole.

Investors who are prepared for this outcome (financially and emotionally) will almost certainly fare better than those who aren’t. Passive investors who are buy-and-holding index funds are likely to have a miserable experience over the coming decade. We hope SMI’s active strategies will do better, as they have in the past (and as they’ve been designed to through careful construction and verified by past back-testing). But even SMI investors will have to summon emotional courage at times to stick with their plans through what is likely to be a bumpy ride ahead.

Because we’ve been writing about this slowly unfolding scenario for a while, we expect most members are already properly allocated. For most, relying on strategies such as DAA and Upgrading 2.0 as the core of a long-term plan offers reason to expect solid long-term results. Those strategies should also provide important emotional support during the market declines we believe are likely. Hopefully you've already positioned your portfolio this way, so you can ignore any short-term headlines and market spasms. If you haven't, Higher Returns With Less Risk, Re-Examined discusses a reasonable starting point for most investors.

SMI always has believed that “forewarned is forearmed.” Long-term investing success is largely determined by the ability to consistently do the right thing at the right time, and avoiding harmful missteps along the way. Many investors made huge mistakes during the last bear market, selling out of fear and then staying on the sidelines as the market eventually bounced back. Those are the types of decisions that can permanently alter your lifetime investing rate of return. “Forearming” SMI readers so they can avoid that type of harmful reaction the next time around is our goal here.

No one can ever say with certainty what the market will do next. But there are times, and we believe now is one of them, when the market gives pretty clear clues as to what is likely ahead, if not immediately, then over the next several years. Investors who pay attention to these historical patterns are likely to perform better and experience less stress than those who are either unaware of — or ignore — the market’s cyclical history and what we can learn from it.