Home > Articles >The S&P 500: Increasingly Concentrated in a Handful of Stocks

The venerable S&P 500 may seem like a broad index. After all, it reflects the performance of about 500 large U.S. companies and covers roughly 80% of the American equity market by capitalization.

But if you look more closely, you'll see the S&P has grown increasingly top-heavy. A handful of stocks now account for about one-fourth of the index's value.

As Mark noted in a post last week, "So much of [the current] market advance has been driven by a very small group of stocks, which all cluster in the mega-cap tech space. You know them well — Microsoft, Facebook, Apple, Google (Alphabet), Netflix, Tesla."

Here's a picture worth a thousand words — illustrating how five of those stocks (plus Amazon and Nvidia) are leaving the rest of the S&P 500 in the dust so far this year: 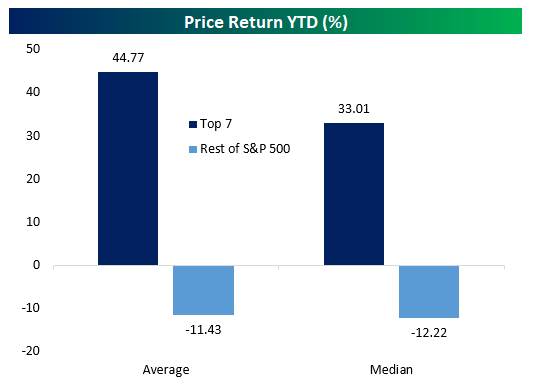 Writing at MarketWatch, columnist Brent Arends explains why the top-heaviness of the S&P 500 could signal a problem waiting to happen.

Yes, these companies [that account for so much of the index's value] are gigantic and global. But this nonetheless raises serious questions over the claims that the S&P 500 alone gives you a broad diversification of your investment risk. It also throws doubt on whether the index somehow represents the entire U.S. economy, and explains why the index has levitated so far this spring, even while the economic rebound has flatlined (or worse)....

Where does this leave the ordinary index fund investor? In a nutshell: Possibly exposed to fundamental index risks that they may not realize.

Arends says those risks are two-fold:

The first is that we see an economic rebound in the coming quarters, and index fund owners miss out, because these big super-stocks have already had their rally....

The second risk is that we don’t see an economic rebound…and investors decide that these gigantic boom stocks are overvalued in a downturn.

The fact that there are other stocks in the index — lots of them — serves to mitigate (but not eliminate) the first risk If the high-flying tech stocks get their wings clipped after rallying early, it's possible that less-glamorous stocks may start to outperform, perhaps based on steady earnings that make those stocks begin to look more attractive.

The second risk Arends mentions — an economic downturn — would seem to pose a greater challenge. If the big tech stocks reverse course even while the performance of the bottom 490-ish other stocks stays mired in mediocrity, that would be an unhappy circumstance indeed.

Our goal in pointing out these risks is not to suggest, "Don't invest an S&P 500 fund." After all, SMI recommends an S&P 500 fund in our Just-the-Basics strategy (and uses an S&P 500 ETF tactically within Dynamic Asset Allocation as well), and we have no plans to stop doing so! We just want to make sure you understand what S&P 500 funds are.

Many investors consider such funds as a proxy for the whole U.S. stock market. But, as noted above, the S&P 500 index is primarily a measure of the performance of large U.S. stocks. And because of the way the index is weighted by capitalization, the S&P 500 has increasingly become a disproportionate measure of "the largest of the largest."

Even though Just-the-Basics is a passive indexing strategy, we make sure we diversify beyond the S&P 500. We add a fund that reflects the performance of small- and medium-sized companies. Another fund tracks the performance of foreign stocks. (Yet another fund adds bond holdings if your asset allocation calls for it.)

As we've noted before, staying diversified means you'll miss out on some of the biggest gains. But it also means you're more likely to avoid the deepest heartache.