The Most Important Financial Chart

It has been a wild start to 2022. This has obviously been true in the "real world" as the world deals with a major European land war for the first time in decades.

It's also been true in financial markets, as the small-company Russell 2000 index and tech-oriented Nasdaq stock indexes fell into "bear markets" (losses of -20% from their November highs), only to rally sharply late last month and then roll over again somewhat in April.

And then there's the bond market.

As wild as the action in stocks has been, the move in bond yields has been absolutely breathtaking. After a dozen years of central bank Quantitative Easing and near-zero interest rate policy — not to mention a 40-year trend of lower inflation — the bond market finally woke up to the fact that the Fed appears to be serious about reining in inflation. Yields have been adjusting higher ever since, producing the worst quarter for bonds in many years (as yields adjust higher, bond prices move lower).

These yield adjustments have brought us to a reckoning with the 40-year trend in lower interest rates. If you've invested for any length of time, you already know that nothing moves in a perfectly straight line. These multi-decade charts of interest rates are about as close as you'll get, and as they make vividly clear, we're at the make-or-break point.

Here's the 10-year Treasury yield, courtesy of Raoul Pal (who calls this chart "the chart of truth"):

The chart doesn't require a lot of explanation, as the main point is how cleanly interest rates have stayed within the downward sloping channel. (The lines on either side of the red center channel line are the one- and two-standard deviation levels above and below the center line.) It's worth noting that the 10-year yield reached 2.8% this week, which would be above the top trend line. However, that's not as clear a breakout as it may appear because this is a monthly chart — meaning the 10-year yield would need to close the month up there to deliver a clear signal, and even then, we can see other instances where the line hasn't held perfectly but yields quickly darted back within the channel after a month or two.

What's not immediately obvious is that each time the 10-year yield has kissed that top line, something in the financial world has blown up. The white circle was the infamous "Powell Pivot" following the late-2018 drop in markets that took the S&P 500 index -20% lower over just a few months. The instance before that was the Great Financial Crisis, the one before that was the end of the dot-com tech bubble. The 1994 tap of the top line coincided with the Orange County, CA municipal bond default, as well as the Mexican "Tequila crisis" when the peso was devalued and an IMF bailout was required to keep the country from defaulting on its debt.

Here's a similar chart from Julian Brigden, this time looking at the 5-year Treasury yield. It shows essentially the same thing but dates back even further. (I also like it because it's a log chart, which often provides a better picture of these longer-term trends.) This chart is current as of a week ago, illustrating that we're right at that potential pivot point. 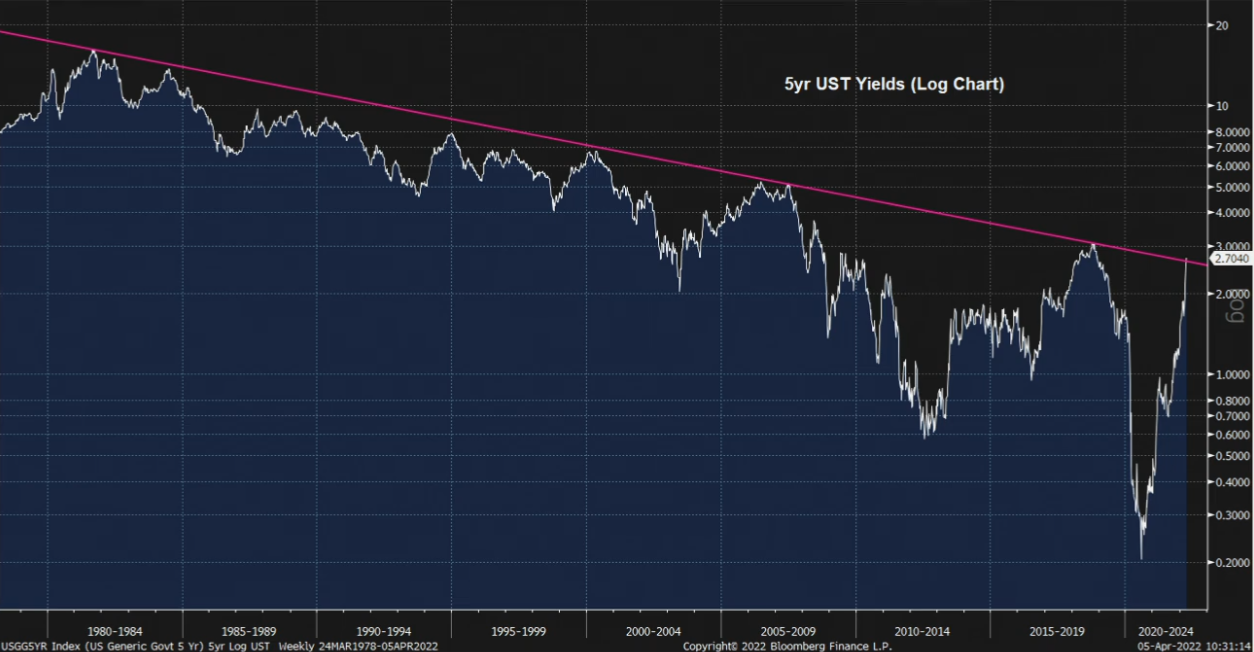 Implications of this line being breached — or rejected

Leaving aside the question of what might break this time as this line is tapped, the reason I consider these charts to be so important is that they're going to reveal shortly whether the 40-year trend of lower inflation — which is the flip side of the same coin as the 40-year trend in lower bond yields — has ended. And the answer to that question impacts everything.

If these yields rip through these 40-year trend lines and continue higher, it likely means that the disinflationary era is over for now. Going back to Julian Brigden's work, based on research done by the Bank of England, we have records going back to the late-1200s that show the last 700 years have generally been characterized by falling interest rates and disinflation. But there have been nine distinct inflationary spikes when interest rates spiked higher, typically for several years (although the last interruption lasted closer to 15 years in the 1960s-70s). The pattern has been similar throughout the centuries: globalization and technological innovation drive the longer disinflationary cycles, while the punctuated spikes higher (which are much shorter) tend to be driven by wars and/or pandemics. Yep.

Don't read too quickly over that — even if the disinflationary trend is over for now, it doesn't mean it's over forever. But several years of elevated inflation can definitely leave a mark, and the investing playbook is pretty different. So we'll obviously want to keep an eye on this as the next few months unfold.

On the other hand, if rates peak here and reject lower off those top chart trend lines, that too has significant implications. That would mean that bonds, which have been miserable to own so far in 2022, should actually benefit from the tailwind of falling rates. This would be in keeping with the experience of most living investors today, who are used to having interest rates fall (and bond prices rise) during tough economic periods and stock bear markets, both of which seem reasonably likely in the months ahead. It's also worth pointing out that the 10-year Treasury yield peaked at 2.83% in the hours before yesterday's massive 8.5% annual CPI print, only to fall after that announcement, to as low as 2.66% since.

So what will it be? A continuation of the 40-year trend with bond yields bouncing off the top of that rate channel and heading lower again? Or has the disinflationary/lower-rate era that started back in the 1980s ended, to be replaced by several years of rising interest rates and stubbornly high inflation?

This is one of the most important investing questions right now. These charts will provide the answer.