Home > Articles >The Market is Not the Economy

The Market is Not the Economy

The biggest issue facing investors right now is how to reconcile the obvious carnage in the real economy with the relentlessly rising stock market. There's a tendency to interpret the market as a predictor of the economy, since it often does lead the economy. And while that may be valid at times, I'm not sure it's an accurate interpretation of the current situation.

You may be sick of hearing about the "FAANG" stocks (Facebook, Apple, Amazon, Netflix, Google, with Microsoft often added as a sixth member of the group), as they've been commented on ad nauseum in recent years. But there's just no denying they are THE story of this market rebound. Consider that the S&P 500 index is trading about -15% below its February high at present. But take those six stocks out of the rebound and the rest of the "S&P 494" is still roughly -28% below the index highs!

That alone tells us the market clearly isn't trading strictly on economic fundamentals. Or, to the extent that it is, it's trading on the FAANGM narrow economy rather than the overall, broader economy. It's not an exaggeration to say that most of this market rebound has really been a rebound in five or six key stocks.

However, we can't dismiss the rebound on that basis, either. As the chart below from Yardeni Research shows, this is a trend that's been in motion for a long time, and has really exploded since the Fed started providing massive liquidity to the markets last September when the Repo crisis hit. The share of the S&P 500 made up by the six FAANGM stocks has increased from ~18% just last fall to 23% of the index today. 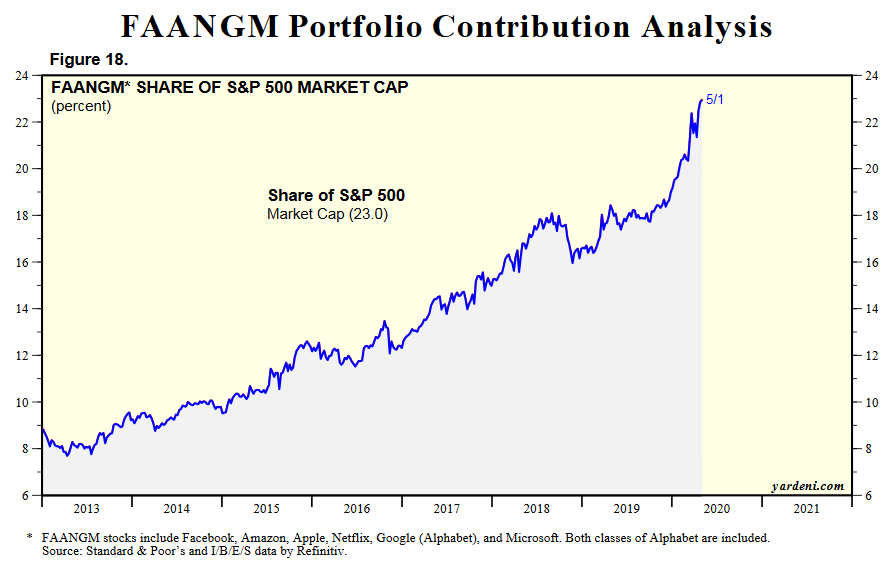 This is what SMI means when we say the cap-weighted indexes are increasingly dominated by the largest stocks! There's a much bigger issue to unpack here sometime in terms of the implications for the broader market and investing in general. But today I want to stay focused on the "economy vs. market" issue.

The massive liquidity being pumped into the market by the Fed means we can't totally discount the possibility that we could continue to see a tanking economy and soaring stock market indexes at the same time. That's what we've had since the March 23 bottom, but I think most investors have tended to view that as a temporary situation, with an expectation that the economy and stock market will converge again before long, either with the economy improving to match the stock market's optimism or the market falling again to match the economic reality on the ground. But remember, we were warning last fall/winter that the economy already was showing signs of slowing — before the coronavirus hit. Yet the market moved straight up from October to February on the constant inflow of Fed liquidity.

As we remind you often, investing is about probabilities, not certainties. I don't know what kind of probability to assign to this "economy stays bad but stocks keep rising" scenario, but I'm confident it's not zero. So we need to account for the possibility.

That said, I'm old-school enough to think the market will have to yield to the broader economic reality at some point, if conditions stay bad long enough. Investors have been willing to look past the "first-order" effects of the recession so far, meaning the terrible data about what has already happened. This includes the 20 million jobs lost, the huge contraction in GDP, etc. Those data points aren't moving the market and really haven't been for some time now. My sense is that much of that is due to the belief that this whole economic episode is going to be relatively brief — the expectation that we'll have a so-called "V" or, at worst, "U-shaped" recovery.

Where I think the market will be vulnerable is if that "best case" scenario starts to crumble. That would most likely be driven by less-favorable virus news (it lingers through the summer or comes back significantly in the fall), but it could happen if the economy simply doesn't come back as strongly as people expect. In either case, if we don't get that V- or U-shaped recovery where economic activity returns fairly quickly to pre-COVID levels, a host of "second-order" factors have the potential to kick in:

That's a long and gloomy list. Yuck! Hopefully, none of that comes to pass. But just as we can't rule out the possibility that the Fed powers the stock indexes higher through their massive liquidity injections, we can't discount the possibility that economic events unfold more according to this list. If that were to happen, I'd have to think the stock market would cave eventually and fall to match the status of the real economy.

So the market could soar or it could tank...real helpful, right? The point of an exercise like this is to illustrate that this simply isn't an all-or-nothing environment, where the probabilities all seem to tilt to one side together. That type of investing environment does come along from time to time, and we may see it happen if either the "much-better" or "much-worse" than expected scenarios play out.

But we're clearly not in that type of environment now, which means flexibility is required. It's uncomfortable to not "know the narrative" we're dealing with yet. That's been the main point of much of our writing the past two months — that it's too early to have a firm outlook because there are too many "unknowables" still. While many investors will choose to guess which way this resolves and place their bets accordingly, we think that's foolish.

Instead, we know the SMI process is equipped to deal with this type of uncertainty via our diversified, trend-following process. It's possible we could have some back and forth before this is all over, where our strategies tell us to cautiously start adding some more stock exposure, only to then reverse and have us lighten up again. That's fine (although none of us will enjoy it if it plays out that way). Because what we need to avoid through this still very dangerous period is blowing up. That's a real possibility for those who bet on the quick recovery scenario and load up on stocks right now.

Almost as dangerous is deciding things are certain to get worse and pulling completely out of the market. Those folks don't risk the huge capital losses of the former group, but having done this a long time, we know that many of those who commit to that intellectual position will likely struggle to get back into stocks for a long time as the market roars away from them. We've seen that happen to many people after every bear market in the past.

No, instead of guessing what's going to happen next, we're content to patiently allow our mechanical strategies to interpret the market's signals. We're always going to trust our process rather than relying on predictions. Our current portfolio positioning remains flexible, with some strategies very conservatively positioned (DAA), others more middle of the road (Upgrading), and others still aggressive (SR). The non-correlated asset classes we own have been a great balance to the stock holdings we've retained, keeping our overall portfolio from plummeting during the Feb/March downturn while still allowing it to participate significantly in the April/May recovery.

It's a sensible, reasonable approach to what remains a very uncertain and potentially dangerous market environment. There's no problem driving 70mph when you're on the highway on a clear day with little traffic. But it would be foolish to keep driving that fast on a narrow, winding road in a downpour. That's exactly the economic/market situation we're in today, so it only makes sense to slow down, be deliberate, and minimize mistakes. When the road opens up and the storm clouds clear — and they will eventually, they always do — we'll open up the engine again and, with our capital intact, be in position to take advantage of the opportunities that always present themselves on the other side of bear markets.

What are you most concerned about in the current market environment? Let's talk about it in the comments below.

04/28/20 | Comments
When the Market Environment Gets Stormy, Rely on Your Instrument Panel
By Mark Biller

Money Roundup: A Tale of Two...