The Loser’s Game That Can Make You a Winner 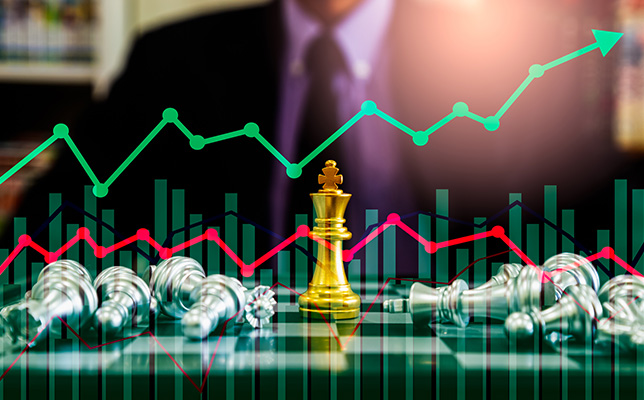 Most of the Sound Mind Investing strategies (Upgrading, Dynamic Asset Allocation, and Sector Rotation) are “actively managed,” which means investments are bought and sold in an attempt to earn better long-term returns than the overall market. In contrast, our lone “passive” Just-the-Basics strategy makes no effort to “beat” the market. The goal of JtB is to mimic the broad market, accepting whatever returns the market earns.

Beating the market is hard. The inconvenient truth of professional investing is that most actively managed investments — including most mutual funds, advisor portfolios, newsletter strategies, etc. — fail to outperform the overall market.

Traditional money management has been premised on the assumption that professional managers can consistently beat the market through research, intelligent risk-taking, and exploiting the mistakes of others. While some do for a season, this assumption has largely been proven false. For many investors, therefore, the secret to winning the money game may be in not trying to win.

Let’s look at an analogy from the world of tennis. In the 1970s, a well-known electrical engineer named Simon Ramo wrote a book on tennis strategy for amateurs: Extraordinary Tennis for the Ordinary Player. Ramo described an approach called the “loser’s game.” By this he meant a type of competition in which the winner is determined by the behavior of the loser. For an amateur player, Ramo argued, the key to winning was not so much in trying to overpower one’s opponent, but rather in letting the opponent defeat himself by making mistakes that lose points.

Ramo contrasted this “loser’s game” approach for amateur players with the “winner’s game” played at the professional level. In pro tennis, spectators are accustomed to seeing consistently precise serves, stunning recoveries, and long, dramatic rallies. Eventually, one player takes a calculated risk and attempts to put his opponent away with an exceptionally powerful or well-placed shot. At the expert level, it is the winning of points that drives the action and determines the outcome.

In short, Ramo observed that amateurs lose points, professionals win points. To test his hypothesis, he compiled an extensive database of points scored in actual tournaments at both levels. He found a surprisingly consistent and symmetrical tendency. In professional tennis, about 80% of the points are won due to superb offensive execution — a winner’s game. On the other hand, in amateur tennis about 80% of the points are lost due to unforced errors — a loser’s game.

What does this have to do with selecting a mutual fund portfolio? In his highly acclaimed book Winning the Loser’s Game: Timeless Strategies for Successful Investing, money manager Charles D. Ellis applied Ramo’s work to the investing arena. When Ellis studied the investment markets, he saw that it was common for 80% of the managers of stock and bond mutual funds to underperform their respective markets! In their efforts to “score” for their shareholders, they regularly did the investing equivalent of hitting the ball out of bounds or into the net. Trying to win, they were losing. It appeared that investing had become a loser’s game.

According to Ellis, it hasn’t always been this way:

The “money game” we call investment management evolved…[into] a loser’s game because a basic change has occurred in the investment environment.… No longer is the active investment manager competing with cautious custodians or amateurs…out of touch with

the market.… Today’s money game includes a formidable group of competitors. Several thousand institutional investors — hedge funds, mutual funds, pension funds, and others — operate in the market all day, every day, in the most intensely competitive way.…

The key question under the new rules of the game is this: How much better must the active mutual fund investment manager be to at least recover the costs of active management?… Recovering these costs is surprisingly difficult in a market dominated by professional investors who are intensely competitive, extraordinarily well informed, and continuously active.…

[V]ery few investors have been able to…beat the market consistently over the long term, particularly after covering all the costs...of “playing the game.”

Believing that investment management has become a loser’s game, Ellis draws this conclusion: Just as the path to victory in amateur tennis is to play a passive, patient game while letting your opponent take the risks, so the logical strategy for the amateur investor should be the same.

Most investors, however (either consciously or unconsciously), are caught up in playing a winner’s game. Trying to beat the market, they buy financial magazines and follow investment services that offer a dizzying array of stock and mutual fund recommendations. They think they must respond to fast-breaking news events and trade with a short-term perspective. They work harder and harder and take extra risks in what is usually a futile attempt to “win.”

In a loser’s game, the strategy is more passive (and certainly more relaxing!). The path to victory lies in minimizing mistakes and being patient. This describes SMI’s Just-the-Basics portfolios where we refuse to play the performance game. Instead, we invest in selected “index” funds, which, by definition, are going to yield returns similar to the market as a whole.

Nice ‘n’ easy does it

An investment strategy based on indexing offers distinct advantages — chief among them is the minimal effort required to set up a simple portfolio. Maintenance is easy too, since all the portfolio needs is occasional (usually annual) rebalancing. Another advantage is that an investor can know that by merely following the market, he or she is likely to outperform the majority of actively managed mutual funds over the long term!

Over the past dozen years or so, passive indexing has exhibited perhaps its greatest stretch of superiority over active strategies. This has been driven by a number of factors, including the dominant performance of the market’s largest technology companies. Most indexes are designed so that the performance of larger stocks accounts for a greater share of an index’s movements than the performance of smaller stocks. Index investors — including those following our Just-the-Basics strategy — have been the happy beneficiaries. (See Fund Upgrading Gets Upgraded: Adapting to an Ever-Changing Market Landscape for more on the market’s shift to passive investing, as well as the changes SMI has made to our Upgrading strategy in response.)

We remain convinced there is value in the active strategies followed by SMI. It’s easy to forget, but the S&P 500 index provided negative overall returns for the entire decade of the 2000s, a decade during which SMI’s active strategies performed exceptionally well. So if nothing else, there’s a diversification benefit to including more than one approach within your portfolio. For example, combining Upgrading with Sector Rotation adds a bit of punch (and risk) to your portfolio, or adding DAA if you want to add more downside protection. (SMI Advisory’s professionally managed Private Client portfolios include both passive indexing and actively managed components.)

In addition, Just-the-Basics is particularly well-suited for investors who have retirement plans that include index funds but offer few actively managed funds. SMI’s active strategies can be difficult to implement in such situations because they require access to a variety of top-performing active funds. Likewise, JtB is a good choice for 529 college-savings plans because such plans allow fund changes only once a year.

In summary, SMI’s Just-the-Basics strategy is an approach that more than holds its own against most active strategies. And it is simple enough for anyone to apply successfully.