Home > Articles >The Large Impact of (Even) Low Inflation Over Time

The Large Impact of (Even) Low Inflation Over Time 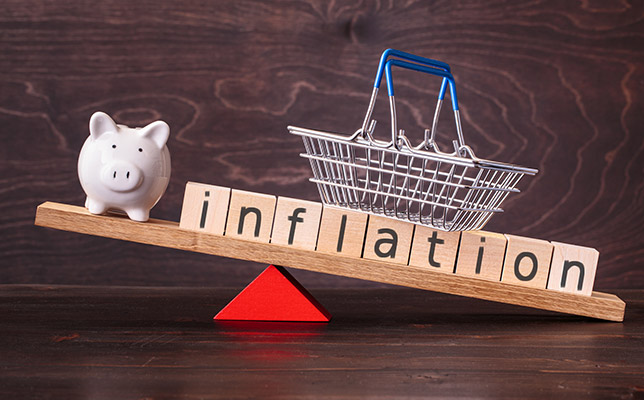 Those of a certain age likely have a favorite “price story” to illustrate the incredible change that has taken place over their lifetime. Whether it’s the 5-cent bottled Coke they used to buy at the corner drugstore or the house their parents bought for $2,500 and sold 30 years later for $125,000, the point is the same: today’s dollars don’t buy nearly as much as they used to!

The historical record backs up these anecdotes. As the Federal Reserve chart below illustrates, the purchasing power of the U.S. Dollar has been in constant decline for decades.

The peak of the chart shows the value of $100 in January 1933 (just months before President Franklin D. Roosevelt took the U.S. off the gold standard). From there, one can see the rapid decline in the dollar’s purchasing power through the 1930s and 1940s, the somewhat reduced slope but still relentless debasement of the 1950s and 1960s, the steeper drop during the inflationary 1970s, and the dramatically reduced slope of the past four decades. 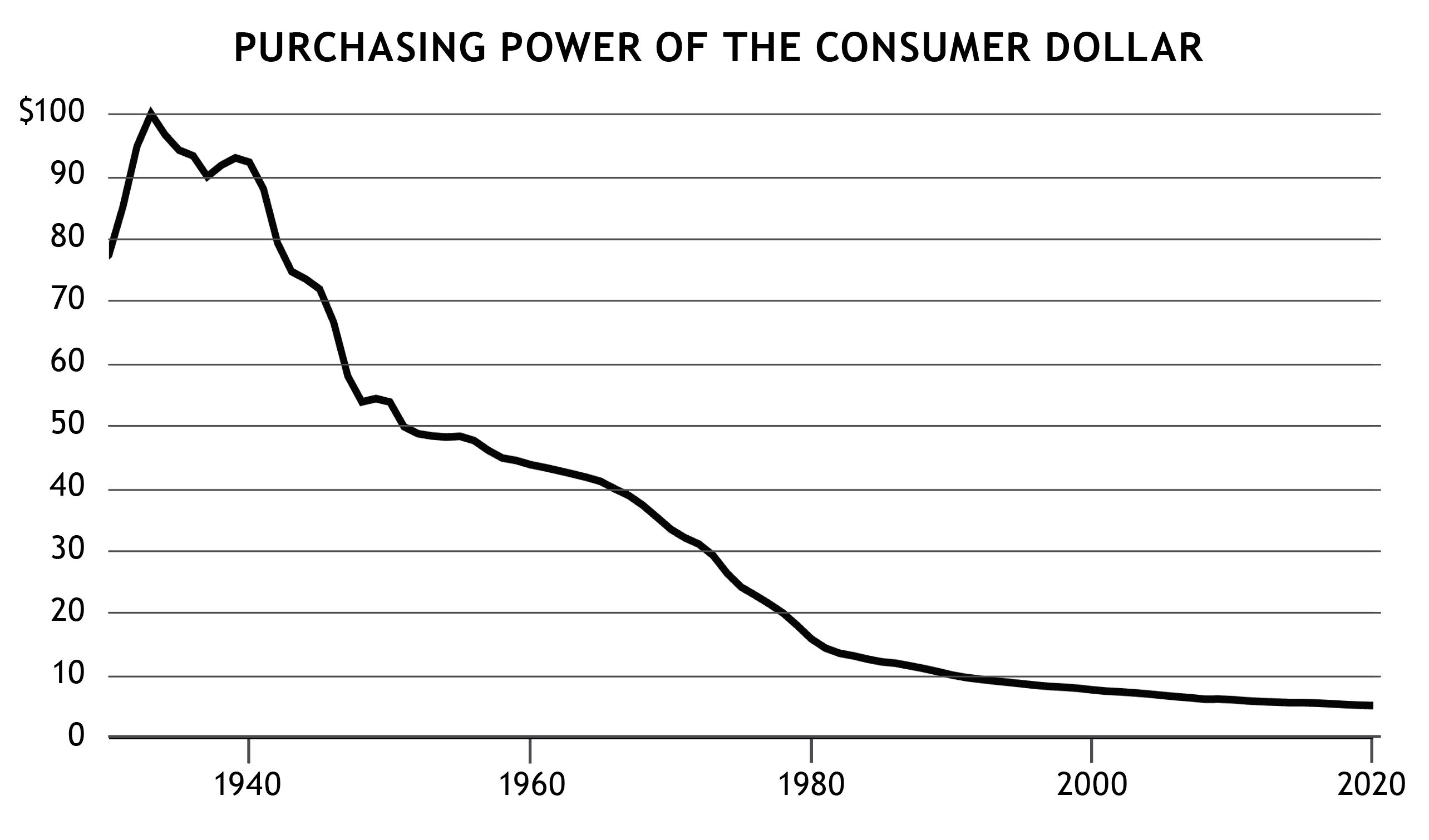 Even low rates of inflation add up

An 88-year period isn’t unreasonable to consider in terms of a person’s lifespan, but may be difficult to relate to in monetary terms. Focusing on shorter periods that align to a person’s working career, or perhaps the length of a typical retirement, can be more helpful. As we turn our attention to the more recent past, the decline of the chart from 1980 to the present doesn’t look especially dramatic.

For this purpose, it can be helpful to reverse the direction of the dollar comparisons. The chart helpfully shows the long, dramatic decline of the dollar’s purchasing power. But in addition to illustrating that the buying power of a dollar has continued to shrink (by 71% since 1980), we can also turn that data around to look from today back to 1980. Doing so reveals that it takes more than three times as many dollars today to buy what a single dollar would buy in 1980 ($3.45 for each $1.00, to be exact).

The larger point of these examples is that even low rates of inflation take a crushing toll on purchasing power over time. The rate of inflation over the past decade was extremely low relative to the past 80 years. Yet even at that historically low level, the rise in the Consumer Price Index (on which the chart and all of these examples are based) totaled 18.84% over the course of the decade.

The implications for investors are clear. A 2010 retiree needed nearly 20% more income in 2020 to cover the same level of expenses as a decade prior.

If we’re not careful, this is where a disconnect can enter into our thinking regarding today’s increasing rate of inflation. There’s a tendency for some to leap directly to projections of hyper-inflation — but there’s a more pressing issue. Hyperinflation (which we consider to be a low-probability outcome) isn’t necessary to create significant disruption in the lifestyles and planning of today’s workers and retirees.

Instead, merely increasing the rate of inflation from the roughly 2% level of the recent past (and the stated target of the Federal Reserve Board) to 3% or 4% has a significant impact. Instead of needing 20% more income each decade during retirement, a retiree would need 30%-40% more income! That’s a significant problem.

While it’s been many years since inflation has been front-of-mind for investors, even when inflation was low, the issue never truly went away (as this article demonstrates). There’s a need to keep your investing capital growing — even in retirement — to keep pace with even modest rates of inflation.

The first step to deal with this issue is maintaining an adequate stock allocation — even into your retirement years. Stocks have been the best asset class over time in terms of outpacing inflation.

The second step is addressing the potential impact of rising inflation on your bond holdings. Rising inflation is typically accompanied by rising interest rates, as we’ve seen already in 2021. This, in turn, causes bond prices to decline. The longer the duration of the bond, the bigger the losses. So shortening the length of the bond maturities in your portfolio (as SMI’s Bond Upgrading has done over the past year) is an important defensive step. Including products such as IVOL and BulletShares can be helpful as well.

Beyond these basics, there are other steps investors can take to combat rising inflation. SMI’s May 2021 cover article (Balancing Inflation Fears With Market Realities) discussed how our Upgrading process can help tilt a stock portfolio toward value stocks, which may provide a boost during an inflationary period when interest rates are rising. That article also discussed other asset classes that can help combat rising inflation, such as commodities, real estate, and gold.

Most investors don’t have to over-complicate this process. If a new higher-inflation regime is going to be with us for a while, investors will have to get comfortable with asset allocations that feature more stocks and fewer bonds than they’ve grown accustomed to over the past four decades.

But even if we haven’t turned the corner to persistently higher inflation, and the recent uptick proves to be “transitory” (as the Fed keeps insisting), this is still a good reminder that even at low levels, inflation is a stealthy, ever-present challenge, constantly whittling away at the value of our dollars. As investors, we need to keep our portfolios growing just to keep our purchasing power steady over time.