This, of course, is very good news for those SMI members who followed our counsel to stay with their long-term plans despite the poor economic/political news and periodic selloffs along the way.

But what if you’re one of those who headed for the exits at some point during the fear-filled days of the bear and never returned? Or, perhaps you missed out on this second-longest bull market ever because you’re relatively new to investing and are just now developing your long-term plan.

Whatever the cause, you’re wondering how best to proceed given how far the market has already come. Is it too late to profit from what remains of the current bull market?

Recently I had the opportunity to counsel a friend of our family who is in the process of refining her long-term investing strategy. She has a modest portfolio put together by her broker (approximately 75% stocks, 25% fixed income), but doesn’t have a good grasp of why she owns what she does or how the pieces fit together. She’d like a fresh start.

She has a physical limitation which makes it difficult for her to predict with confidence how long she will be able to work. Consequently, she feels a need to grow her portfolio as quickly as she can, but is aware that taking too aggressive a posture could lead to losses that would make her situation even worse.

What approach would balance her need for growth (which suggests she should increase her stock allocation to 100%) with her fear of loss (which is exacerbated by her already too-small portfolio combined with the apparent risk of investing near new market highs and possibly just before a market decline)?

She might be comforted to know that, since 1929, when the S&P 500 has hit new highs after a long period of sideways movement (as it has done recently), a year later the index was even higher 9 times out of 10, gaining an additional +15.6% on average. Unfortunately, there’s no guarantee this time won’t be the exception to the rule.

Were it not for the risk associated with the current lofty level of stock prices, an indexing strategy such as SMI’s Just-the-Basics would be a good fit for our friend. It’s easy to set up, requires only annual attention, and would position her to earn market returns over the next decade. However, such a portfolio offers no downside protection in the event of a bear market. 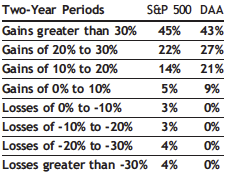 Our Dynamic Asset Allocation strategy, on the other hand, is an excellent approach when protecting capital from bear markets is a primary concern. The nearby table shows how DAA performed over every rolling two-year period from 1981 to date. (Rolling periods look at holding periods beginning on January 1, February 1, March 1, and so on rather than looking only at calendar years. This study included results for a total of 415 different 24-month holding periods.) I chose a two-year holding period because the average bear market lasts between one and two years, and stock-market investors need to be able to stay committed to their strategy at least two years if they hope to come out the other side and enjoy the fruit of the next bull market.

As shown, DAA gained 30% or more (in total, not annualized) in 43% of all the two-year periods during the 35+ years measured. More importantly for my friend’s situation, there were no two-year periods where the strategy lost money. This is due to DAA’s ability to shift out of stocks and into better-performing asset classes as conditions warrant. While past performance is no guarantee of future results, this history illustrates the essentially conservative nature of the DAA strategy.

I suggested to my friend that she consider using DAA as her primary approach for at least the next two years. Then, when the market (and risk) eventually corrects to lower levels in the next bear market, she could reassess and possibly change to a somewhat more aggressive, longer-term strategy.

If you find yourself on the sidelines looking for a low-risk way to once again get stock-market exposure, perhaps DAA would be a good fit for you as well. It won’t protect you against all losses in the short-term, but it has done a great job of preserving capital through bear markets.