Today is the 10th anniversary of the lowest point of the Financial Crisis bear market. On March 6, 2009, the S&P 500 index hit its (symbolic!) intra-day low of 666. Its lowest close would come a few days later, but regardless of which date you choose to date the new bull market from, it's in the process of turning 10 years old. Which makes this the first bull market to reach that age...ever. 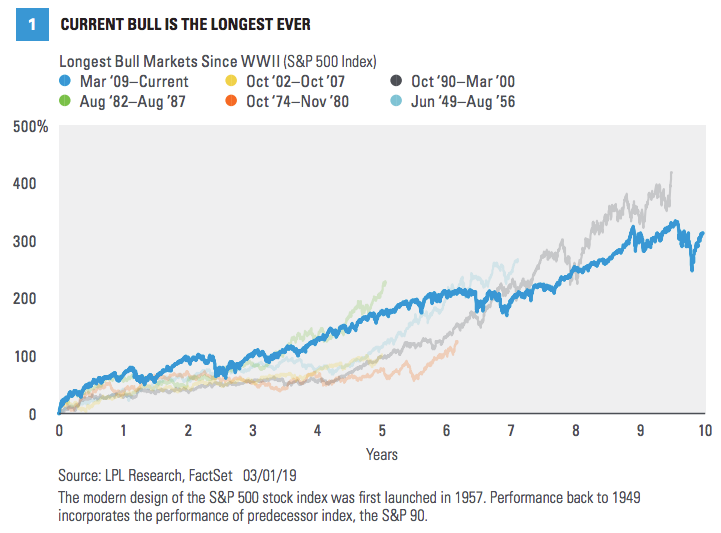 Unless, of course, the "current bull" isn't still a bull at all. Admittedly, this possibility seems improbable given the stock market's strong start to 2019. But as Mark Hulbert points out (and as SMI discussed back in January), sharp rallies — that often appear to be new bull markets — are part of the normal bear-market experience. Hulbert repeats the point that SMI made earlier: each of the last two bear markets contained at least one "bear-market rally" that was larger than the current rally we've experienced from the December 2018 lows.

Given that the market has yet to surpass last September's all-time high, we have to at least consider the possibility that we're no longer in a decade-long bull market, but rather the early stages of a new bear market. The likelihood of that diminishes as time goes by and the market works its way higher, but at this point, it's still a possibility. Which is why some of SMI's defensive positioning remains, even as other aspects have turned back to offense.

Going with the more probable scenario that the bull market is still intact, what should we glean from the fact that, at 10 years old, this is the oldest bull market on record? Well, most obvious is the old stock market saying "Trees don't grow to the sky." In other words, markets don't keep going in one direction forever. The markets are cyclical, with bear always following bull, and round and round.

That said, there's another old market saying that "Bull markets don't die of old age." This is a good reminder that a bull won't typically stop and turn into a bear for no reason. So what reasons are there for us to expect this bull to turn into a bear?

There are two contenders for the top spot on that list. The first is high historical valuations, which (as we've detailed many times) tell us a great deal about what returns are likely to be over the next decade or so, while being of frustratingly little use as to the timing of future declines.

The second reason to suspect the end of the bull may not be far off is the drastic change in monetary policy and interest rates over the past two years. Yes, interest rates remain at historically low levels that wouldn't seem to be problematic. But this bull market's 300% gains were built largely on a steady gusher of global central bank liquidity, which was provided with the expressed goal of boosting financial asset prices. As those policies have ended (and to a slight degree, reversed) over the past year, the stock market has run into difficulty. It's not a coincidence that the market has struggled — and remains below its January 2018 levels today, despite the big rally to start this year. 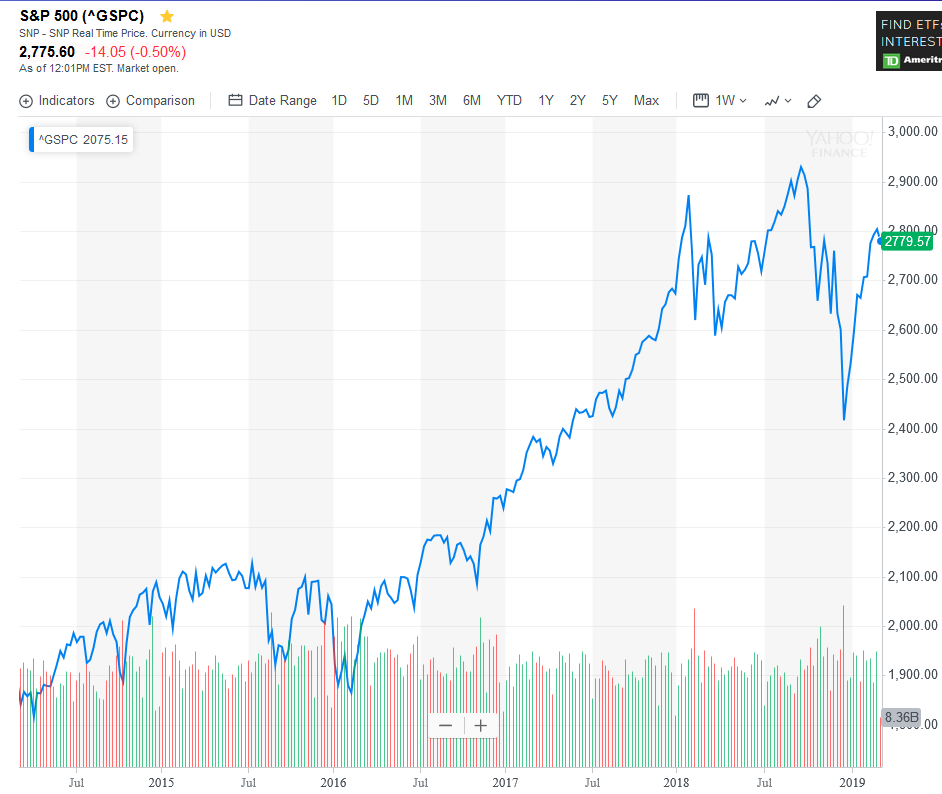 The Fed clearly demonstrated in January that it is going to try to keep this bull market going as long as possible. That alone is good reason to suspect a new all-time high is likely before this bull rolls over. The Fed always tries to hold off bear markets, but ultimately they happen anyway. That will be true in this cycle as well, although admittedly we have no way to know if that will be this year or farther in the future.

Still, the monetary environment has changed — drastically — from the first 8-to-9 years of this bull market. As far back as 2012-2013 we were writing that an eventual change in Fed policy was the trigger that ultimately would turn the cycle from bull to bear. Nine interest rate hikes and a partial reversing of the Fed's balance sheet later, we don't have any reason to think otherwise.

Following a defensive playbook has been hard so far this year, given the market's rebound. But please don't be fooled into thinking that the past two months invalidate 1) the need and appropriateness of a defensive mindset at this point in the market cycle, or 2) the ability of SMI's specific defensive mechanisms to handle the upcoming bear market, whenever it does kick in fully. If we're wrong in our outlook about a bear market being a significant threat within the next few years, our strategies will follow the market and participate in most of the upside. But if we're right, those defensive measures should help protect those who stick with these strategies from a significant portion of the market downside to come.