The Benefits of Blending Upgrading and
Dynamic Asset Allocation

In the weeks following the launch of our Dynamic Asset Allocation strategy last January, a conversation developed on the SMI Weblog regarding the best way to combine Upgrading and DAA within a single portfolio. We suggested that while there wasn't necessarily any one "right answer" to that question, a 50-50 split between the two strategies seemed appropriate as a default starting point. From there, more conservative investors could tilt their portfolios further toward DAA, while more aggressive investors might tilt toward Upgrading.

The reason we suggested combining the two strategies in a portfolio, rather than focusing on one or the other, is that they tend to complement each other. When comparing their historical returns, it quickly becomes apparent that Upgrading has a tendency to race ahead of DAA during strong bull markets, while DAA holds up much better than Upgrading during bear markets and other downturns. If it were easy to consistently identify where the market is in the bull/bear cycle, it might be possible to switch back and forth, maximizing each approach.

But that's very difficult to do consistently well in practice — the beginning and the end of most bull/bear markets are typically evident only in hindsight. Given that, a portfolio with both DAA and Upgrading represented offers the best of both worlds.

Experienced investors understand that the most difficult part of investing has little to do with knowledge. Rather, it's the psychological requirement of taking actions that run exactly the opposite of what your emotions are telling you to do. For example, during deep bear markets your emotions will try to convince you to sell stocks, but the successful investor recognizes that is the very worst time to sell.

This is where owning both Upgrading and DAA simultaneously can be so helpful. Even in a year such as this one, when Upgrading has performed much better than DAA (19.9% vs. 11.7% year-to-date), many readers have been comforted by knowing a significant portion of their assets are invested in the DAA strategy, which has held up extremely well in the face of past bear markets. In fact, for many readers, having that safety net is what helps them follow their plan during periods when the stock market looks vulnerable.

As the nearby table shows, it's not unusual for Upgrading to run far ahead of DAA during big bull market years. 1999 and 2003 are good examples of that. It's difficult to stick with any strategy — even a great one like DAA — when you see alternatives such as Upgrading beating it by such a wide margin. The risk of solely using DAA is that after a year or two of this type of underperformance, you might throw in the towel and make a change, just as the benefits of DAA were about to kick in during a bear market. 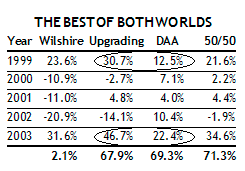 It's good to recognize that Upgrading and DAA are a bit like the tortoise and the hare. Upgrading runs out ahead during bull markets, but DAA catches up eventually, typically during bear markets when other stock investors are feeling maximum pain.

Not only does a blended Upgrading-DAA portfolio allow you to feel like you're participating in the market's upswings while still being protected during downturns, this bit of strategy diversification can actually boost your overall returns at times.

Returning to the table showing the 1999-2003 period, we see this dynamic at work. In both 1999 and 2003, Upgrading more than doubled DAA's returns. But in between, Upgrading lost money two out of three years, while DAA was positive every year.

When we review the bottom row of the table, we learn that the total returns for Upgrading and DAA were nearly identical for the five-year period as a whole. But the 50/50 combination of the two strategies actually earned slightly more than either did by itself. This happened through the rebalancing mechanism — for example, after 1999's big Upgrading gains, some of those profits were shifted to DAA to restore the 50/50 mix. The monies that were switched avoided 2000's Upgrading losses.

Not every period is going to turn out this way, of course. There will be stretches when each strategy leads the other for a few years. But it does demonstrate that owning both strategies isn't likely to cost you significantly compared to holding only one or the other.

More importantly, owning a combination of both is likely to provide strong psychological benefits — the "sound mind" that helps you stick with your plan through good markets and bad.

Your Tax Dollars at Work