Home > Articles >The Advantages of Giving (and Receiving!) Through a Charitable Gift Annuity

The Advantages of Giving (and Receiving!) Through a Charitable Gift Annuity

Most charitable gifts are easy to understand. You write a check to a charity and the gift amount is deductible from your taxable income. But there are other ways to give, some of which can provide greater benefits both to the charity and to you. While some advanced giving tools are limited to donors of substantial means, a charitable gift annuity (CGA) is within reach of many potential donors.

How a CGA works

Charitable gift annuities are known as "split interest" gifts, meaning money flows both to charity and to you.

Most CGAs offer the same return because most providers adhere to the rates recommended by the American Council on Gift Annuities. That way charities don't have to compete with each other based on rates.

CGAs offer fixed rates. There's no such thing as a variable CGA, and you can't buy an optional inflation rider (as you can with a commercial annuity).

As the nearby table shows, CGA returns are lower than those offered by commercial annuities. The table compares the annual income offered by CGAs with the income available from a commercial (non-gift) annuity purchased through Vanguard. 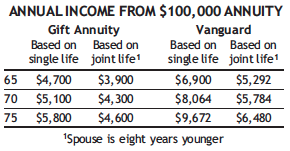 While commercial annuities may provide significantly higher returns, CGAs offer some important tax benefits that can help offset the difference.

In addition, you will receive two tax benefits. First is a tax deduction equal to your $100,000 contribution minus the present value of all the payments that are expected to be made to you based on your life expectancy. In this case, that deduction equals about $40,000, which is the present value of the amount estimated to go to charity upon your death. (Determined by the calculator at ConsumerReports.org.) This tax deduction can be taken immediately or spread over five years.

If you fund the annuity with appreciated property instead of cash, you'll receive a third tax benefit. Instead of paying capital gains tax on the appreciation all at once, it will be spread out over your life expectancy. For example, let's say your $100,000 CGA was funded with stock you bought for $20,000. Instead of paying capital gains tax on $80,000, you will pay it on a portion of the income you receive each year. Of the $5,100 in annual income in this scenario, $743 would be tax-free, $2,970 subject to capital gains tax, and $1,387 subject to ordinary income tax.

Depending on your income, tax bracket, and how you fund a CGA, your net cash-flow may end up being comparable to what it would be with a commercial annuity, despite the CGA's lower rate. And of course, your designated charity will also benefit.

How you fund a CGA will have a number of implications, including when your chosen charity receives a contribution.

Some reasons why you might prefer to work through a foundation:

Of course, one factor that's outside of your control is how long you will live. Still, your longevity can impact how much of your CGA ultimately goes to charity. If you live longer than your life expectancy, a CGA funded through a foundation will still contribute the same amount to the charity. But if you funded the CGA directly, less will go to the charity (because your payments will continue for life, eating into the principal remaining). The opposite is also true: if you die earlier than your life expectancy, more will go to the charity if the CGA was obtained directly from them.

Whether you go direct or through a foundation, you receive the same upfront tax deduction.

The ideal candidate for a charitable gift annuity is an older person or couple with a charitable intent and a desire to turn a portion of a nest egg or an appreciated asset into a guaranteed income stream at a fixed rate (which is currently significantly higher than CDs and many other fixed-income instruments). If that describes you, keep in mind that once you fund a CGA, you can't get the money back. So be sure to only use funds you won't need or want to use for other purposes, such as future medical bills or an inheritance. And as with most complex tax matters, consulting a tax advisor about your specific situation is recommended.

11/01/14 | Comments
Valuing Non-Cash Donations – They’re Worth More in Tax Savings Than You Might Think!
By Matt Bell