Home > Articles >Stock Indexes: Taking the Measure of the Market

Stock Indexes: Taking the Measure of the Market

One of the simplest portfolios to assemble is one that seeks to match the performance of the stock market (as opposed to one that attempts to “beat the market”). Index funds, such as those used in SMI’s Just-the-Basics strategy, make that a relatively easy task.

Understanding index funds can be especially important to those who participate in a 401(k) plan at work. Most plans include one or more of the most common index funds among their investment options. So for the benefit of those who want to “keep it simple” in their 401(k) account, let’s take a closer look at the index-fund landscape.

When you hear or read that “the stock market was down 125 points yesterday,” it makes the market seem like a single entity, as if all stocks fell together, and presto, a loss of 125 points resulted. In reality, stocks rarely move together like that. On a “down” day, when thousands of stocks are declining in value, thousands of others may be increasing in value. Any report about how “the market” did is based on a measurement — or index — of a particular group of stocks.

Many indexes exist, each measuring how certain types of stocks are performing. Some indexes measure the performance of small-company stocks. Others focus only on large-company stocks. Still others are aimed at measuring the overall market. Indexes serve as benchmarks against which you can evaluate the performance of the stocks or mutual funds you own.

But just as learning about yesterday’s rain in Seattle won’t tell you if it rained in Atlanta, so it is with most stock-market indexes. Knowing how the largest stocks performed is of little value if you own a mutual fund that invests primarily in small companies. To get meaningful information that relates to your situation, you have to select the correct index. That means finding indexes similar to the holdings in your portfolio.

There are many mutual funds designed to mimic certain indexes (see table below). If you participate in a 401(k) retirement plan at work, chances are the plan allows you to choose from various index funds. You can learn which index a particular fund is tracking by looking at the fund’s prospectus (or the summary information provided for the fund by your 401(k)-plan administrator).

Here is an overview of the most popular indexes.

As you can guess, an index that tracks the performance of the whole market includes thousands of stocks. What you might not know is that there are several “total-market” indexes. (Why have multiple indexes to measure the same thing? Because the companies that create these indexes are competitors. Each is trying to produce the more popular “product line” of indexes to follow.)

The companies that comprise the “large-capitalization” (or “large cap”) indexes include many corporate household names. Their stocks often are referred to as “blue chips.” Funds that own these large-company stocks are found in SMI’s stock Categories 1 and 2.

Medium-sized firms sometimes cause confusion for SMI readers because we group these companies together with small-companies (Categories 3 and 4). We do this to gain simplicity for new investors, but it’s good to recognize that these stocks, and the funds that invest in them, often behave differently than their smaller siblings.

These indexes fall into two distinct groups: the pure small-cap indexes and what you might call the “small-caps plus” indexes. All three indexes listed below contain a numerical majority of small-company stocks, but the Nasdaq also includes some medium and even large companies. As a result, the Nasdaq Composite offers less of a pure reflection of small-company performance than do the S&P 600 and Russell 2000. For SMI purposes, however, a fund based on any of the indexes below is appropriate for investing the Category 3 or Category 4 portion of your portfolio.

Refinements to many of the above indexes have created additional indexes split into “value” and “growth” components. Such splits usually are accomplished by applying one or more valuation measures to all of the stocks in an index, with those meeting certain criteria being placed in a value index and the rest being put in a growth index.

Because growth/value characterizations allow greater customization, these refined indexes can be useful to SMI readers. For example, when using an index fund based on the entire S&P Small Cap 600 index, you would have to allocate that fund equally to SMI Categories 3 and 4. However, if you have access to an S&P 600 Growth fund and an S&P 600 Value fund (or ETFs of same), you can tailor your purchases to the exact percentage you want in Category 3 (small-value) and Category 4 (small-growth), respectively.

Using this information in your 401(k) plan

Once you understand these various indexes, and identify funds that track them, it’s easy to construct an index-fund portfolio within your 401(k) account. Simply follow our Just-the-Basics formula by dividing the stock portion of your portfolio this way: 40% large-company focused, 40% small-company focused, and 20% international. 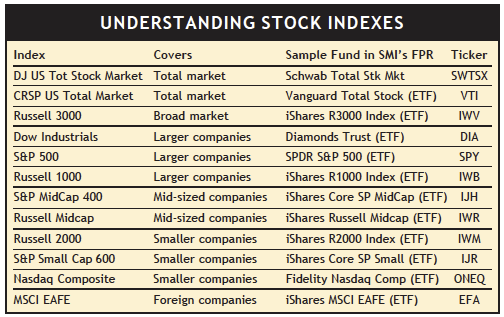 06/01/14 | Comments
Indexing: The Loser’s Game That Can Make You a Winner
By Austin Pryor & Mark Biller