Sector Rotation in Light of “Upgrading 2.0”

Sector Rotation is SMI’s most aggressive strategy, and historically has also been its most profitable. Since launching SR as a live strategy in November 2003, it has earned an annualized rate of return of +17.3%. SR’s recent results have been even more dramatic, with a stunning +32.6% annualized return over the past five years (thru 12/31/17).

That’s pretty rarified air for an investment strategy, especially over such a prolonged time period. Not surprisingly, with returns like that, many SMI members wonder how much of their portfolio can be safely allocated to this impressive strategy. And following the introduction of the protective “Upgrading 2.0” protocols last month, two natural questions regarding SR have arisen:

To answer the first question, it’s worth noting that we’ve spent the past 15 years researching and looking closely at SR. We’ve tested quite a few ideas, many of which have been aimed at trying to tame SR’s volatility extremes. Might the new 2.0 protocols finally accomplish this elusive goal?

Unfortunately, the answer is no. Granted, there were only four periods in our nearly 30-year SR testing window when the market dropped enough to trigger these defensive protocols. But surprisingly, whereas those defensive measures were strongly positive when applied to Upgrading, they were beneficial to SR in only one of the four cases.

After trying this new approach from several different angles, we’re left with the same conclusion we’ve drawn from other past attempts to “tame” SR: its performance is too frequently strong to warrant ever exiting. Yes, this means we have to live through gut-wrenching volatility at times. But when we try to either dilute SR’s holdings or sidestep potential downturns, we miss out on too many strong upside moves.

If we’re not willing to concede the performance tradeoff that comes with modifying the strategy itself in an effort to control risk, this means that risk management as it pertains to SR has to be undertaken at the strategy allocation level. In other words, members need to limit their SR allocation to a percentage of the portfolio where they can stand the level of volatility SR produces.

In the past, we’ve recommended limiting the SR allocation to a maximum of 20% of a person’s stock allocation. But does the fact that Upgrading’s risk profile has declined with the implementation of the new 2.0 protocols perhaps justify an increase to a person’s SR allocation?

Let’s unpack this idea a bit first. Some readers are wondering why in the world someone would want to boost the SR allocation in light of the recent Upgrading enhancements, while to others it makes all the sense in the world.

To understand these vastly different viewpoints, recognize that most members who currently invest in multiple SMI strategies likely responded to the new Upgrading 2.0 research in one of two ways last month:

Some investors see the world primarily through the lens of avoiding risk, while others view it through the lens of maximizing gain. The research that follows is targeted at those in the second camp who are inclined to respond to the lower risk of Upgrading 2.0 by boosting their SR allocation. This idea makes sense in theory, but our testing indicates that caution is warranted.

A couple of quick disclaimers before diving into the data. First, what follows is not an exhaustive look at the impact of Upgrading 2.0 on the inter-relationships of all the SMI strategies. We’ll do a deeper dive on that in the future, likely something similar to the May 2014 cover article that introduced the 50/40/10 concept. (That is, a portfolio allocated 50% to Dynamic Asset Allocation, 40% to Fund Upgrading, and 10% to Sector Rotation.) The intent of this article is to isolate the specific impact of SR. Second, there’s nothing magical about 50/40/10, but it’s the default starting point for most SMI members looking to use multiple strategies, so it’s the most natural starting point for illustrative purposes. 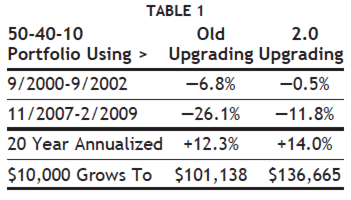 To establish a baseline for comparison, it’s helpful to quantify how much of an impact the new Upgrading 2.0 defensive protocols would have had on a 50/40/10 portfolio in the past.

To establish this, Table 1 shows the results from 50/40/10 portfolios using “old Upgrading” vs. “2.0 Upgrading” during the two most recent bear markets. It also shows the overall annualized rate of return for the two versions for the past 20 years. To be clear, the only difference between these two portfolios is the application of the new 2.0 protocols to the 40% Upgrading portion of each.

Clearly, Upgrading 2.0 would have made a significant impact across the board. The “Growth of $10,000” row is included to illustrate how the power of compounding amplifies the difference. Framed a little differently, that row demonstrates that over 20 years, the new Upgrading 2.0 protocols would have boosted the total value of a $10,000 portfolio invested in 50/40/10 by 35% over the old approach. 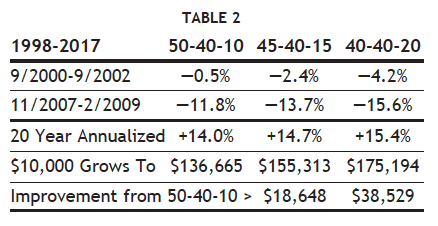 From this baseline, we can make changes to the mix of strategies and measure the impact of those changes. Table 2 shows the same “Upgrading 2.0” baseline version of 50/40/10 from Table 1, then adds two variations.

Not surprisingly, decreasing the protection provided by DAA while increasing the riskier SR allocation causes the bear-market losses to be a bit more severe. But over the entire 20-year period, it also adds to the total returns sufficiently that some members would likely accept that tradeoff.

If this were the end of the story, many members would likely find this to be compelling evidence to boost their SR allocations. But unfortunately, there’s an important complication that may make you rethink the wisdom of that maneuver.

Long-time readers may remember that for the first several years after SR’s launch, we made a big deal out of one particular trade in the SR backtesting. Back in 1999, at the peak of the dot-com bubble, the SR research showed we would have bought a fund named “Amerindo Technology.” The results of that trade were unlike anything else in the SR backtested history: Amerindo shot up to +450% gain in 16 months after being purchased. Subsequently, it endured the single worst month in Sector Rotaton’s history, a loss of -27.2% in April 2000. But even after that, it still exited with a whopping +275% total gain.

To be blunt, we never expect to see another trade remotely close to that again, which is why for years we would often post two sets of SR results: one that included the Amerindo trade, and another that excluded it. That +275% gain had a powerful effect on SR’s overall returns, especially when those 18 months constituted a large chunk of the 13-year backtested history we had at SR’s launch. We didn’t want to misrepresent what SMI readers should expect, given we believed Amerindo was a never-to-be-repeated outlier.

Over time, we’ve become a little more sanguine about the Amerindo trade. One reason is, with nearly 30 years of history on SR now, the impact of that trade — as great as it was — has been diluted dramatically in terms of SR’s long-term return history. (It’s worth pointing out that if Amerindo hadn’t existed, the alternative fund SR would have bought gained +173% during the months that Amerindo earned +275%.) Also, witnessing multiple other triple-digit gains within SR since its launch has softened our stance on the idea that 1999 was so unusual and perhaps ought to be excluded from the strategy history. 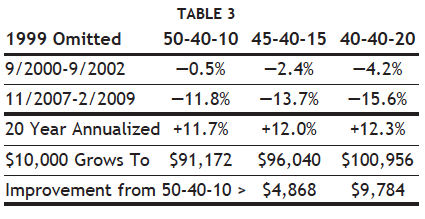 That explanation leads us to Table 3, showing the same three portfolios from Table 2, with one key difference: we’ve excluded 1999 from the 20-year total return calculation.

It’s not that 1999 doesn’t count. The tech bubble happened and the gains were real. But notice the “Improvement from 50-40-10” numbers in Table 3 are much lower than those in Table 2. That shows almost all of the overall gains of shifting money from DAA to SR across the portfolios are attributable to that single year of amazing stock-market bubble returns. When we exclude 1999, the advantage of decreasing DAA and increasing SR dwindles dramatically. Yet the downside risks still remain — there is no impact on the bear market returns experienced by the various portfolios.

Over the other 19 years, each 5% allocation shifted from DAA to SR resulted in a boost of only +0.3% to overall returns. That doesn’t seem like a compelling trade-off to us. The psychological toll of SR can be significant at times, and not just in ancient history (like 1999 — ha!). Many members likely remember SR falling a stunning -21.8% in just seven trading days back in 2015 when then-presidential candidate Hillary Clinton tweeted about drug-company price gouging and sent SR’s current biotechnology holding over the cliff. When we warn members that SR isn’t for the faint of heart, we aren’t kidding around.

The whole point of combining SMI’s strategies into something like a 50/40/10 portfolio is to minimize the wear and tear on your emotions and make it easier to consistently do the right thing. Boosting SR — by far the most volatile SMI strategy — will likely boost returns over the long-term if an investor can stick with the program through the emotionally trying periods. In our experience, that’s a huge “if.”

That said, our approach to this type of information is to report it, warts and all, and let you decide how to apply it. SMI’s “official” guidance regarding Sector Rotation allocations remains unchanged: For most members, 20% seems like an aggressive upper threshold, and many should limit its use well below that level.