As has been the case in recent years, interest rates were the primary driver of the financial markets in the second quarter. Investors continued to focus heavily on each utterance by the Federal Reserve, trying to determine when the seemingly inevitable first interest-rate hike will come.

As 2015 began, the consensus opinion was that the rate-hiking process would begin by June. However, a run of softer than expected economic data during the first half of the year pushed those plans back, and the June Fed meeting came and went without any change. Investors quickly shifted their attention to the upcoming September and December meetings as the next likely points for rate hikes to begin.

So while interest rates didn’t overtly affect the stock market this quarter, the anticipation of rate hikes later this year didn’t help. Neither did a rekindling of the Greek/Euro tensions. Stocks didn’t overreact to these external threats, but these factors did serve to restrain investor enthusiasm, and the stock market finished the quarter essentially flat (though still up slightly for 2015 as a whole).

We’ve made a change to how the performance of the SMI strategies is being reported. In the past, we’ve included a detailed performance table once each quarter in these quarterly report articles. Starting this month, we’ve created a new performance table that will appear on the back cover of print version each monthly issue. It’s also available on the homepage of the SMI website for members who are logged in — look for the "Performance" tab just below the four small pictures). This new table includes nearly all of the information the old table used to report quarterly, but expands it to include all of SMI’s strategies and will be updated more frequently.

We hope making this information available every month won’t cause readers to become more short-term oriented. But as we’ve added more strategies, and with more SMI readers mixing and matching these strategies within their portfolios, it seems appropriate to provide updated performance information more often.

(Referring to that table may be helpful as you read the rest of this article, so we've included it at the bottom of this page.)

When the overall stock market is flat, there’s a reasonable chance these two strategies are going to follow suit. That was the case in the second quarter, as the market, Just-the-Basics, and Stock Upgrading all performed within a tiny range of +/-0.1%. For the first half of 2015, JtB is up 3.5% and Upgrading is up 3.4%, both roughly double the +1.7% gain of the overall stock market (Wilshire 5000). 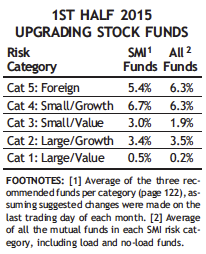 While stocks have been fairly dull this year, the “story” has been the surprising resurgence of foreign stocks, and to a lesser extent small-company stocks. This is evident in the year-to-date numbers of SMI’s risk categories (see table at right) as well as the performance of the major market indices.

The Dow Jones Industrials (a group of 30 extremely large companies) was down -0.1% through mid-year, the S&P 500 (the largest 500 stocks) gained 1.1%, and the Wilshire 5000 index (the widest measure of the whole market, with smaller stocks representing as much as 25%) was up even more at +1.7%. Adding smaller stocks clearly has helped the broader indexes, and including small and foreign stocks in SMI portfolios has benefitted both JtB and Upgrading as well so far this year.

Despite the Federal Reserve holding short-term interest rates steady, longer-term rates did rise during the second quarter in anticipation of the eventual Fed move.

The 10-year Treasury bond began the second quarter yielding 1.94% and rose as high as 2.50% by mid-June. The 30-year Treasury rose even further, from 2.54% to as high as 3.25%. These rather dramatic moves explain the poor performance of the bond market during the second quarter, and consequently investments in SMI’s Bond Upgrading portfolio as well. With all three holdings down for the quarter, the year-to-date numbers moved from a +2.2% gain after the first quarter to a negative -1.5% for the entire six-month period.

This was probably the most challenging quarter DAA investors have endured since the strategy launched in January 2013. Long-term bonds and real estate were hurt by rising interest rates, and while both were replaced by the end of the quarter, those holdings weighed on DAA’s returns. DAA lost -5.3% during the second quarter and is down -2.6% for the year so far.

Those losses aren’t terrible, but they’re particularly acute for readers who are new to the strategy this year and experienced significant losses in bonds and real estate right away. Giving back a portion of earlier gains is often part of the deal with trend-following strategies, but when you’re new, it’s harder to have early losses because there were no previous gains! For those in that position, take encouragement from Austin’s editorial this month, as well as DAA’s longer-term track record (see the aforementioned performance table, reproduced below). Mild losses along the way are bound to happen, but avoiding the big losses is what DAA excels at. A disappointing first few months doesn’t negate any of the reasons you chose to use this strategy in the first place.

Sector Rotation rebounded from a small first-quarter loss to generate an outstanding +8.2% gain in the second quarter. We made a change to the SR recommendation as the second quarter began and it paid off right away. SR has now returned +23.6% over the past 12 months.

This oddly titled portfolio refers to the specific blend of SMI strategies — 50% DAA, 40% Upgrading, 10% Sector Rotation — examined in detail in our May 2014 cover article, Higher Returns With Less Risk: The Best Combinations of SMI’s Most Popular Strategies. That article found this combination of strategies has worked synergistically in the past to boost returns while simultaneously reducing risk — a great combination. It accomplished this by adding the high upside of SR and the volatility-dampening properties of DAA to an Upgrading base. (We report the results of this portfolio as if the Upgrading portion is invested 100% in stocks — no bonds. But if your risk temperament and season of life call for you to blend stocks and bonds in the Upgrading portion of this portfolio, then by all means do so.)

The performance of the three strategies will vary at times, but a portfolio diversified among them will smooth out some of those wrinkles along the way. Whether you’re using this specific 50/40/10 blend or a different allocation combination tailored to your specific risk tolerance and situation, we think many SMI readers can benefit from combining them in some fashion. 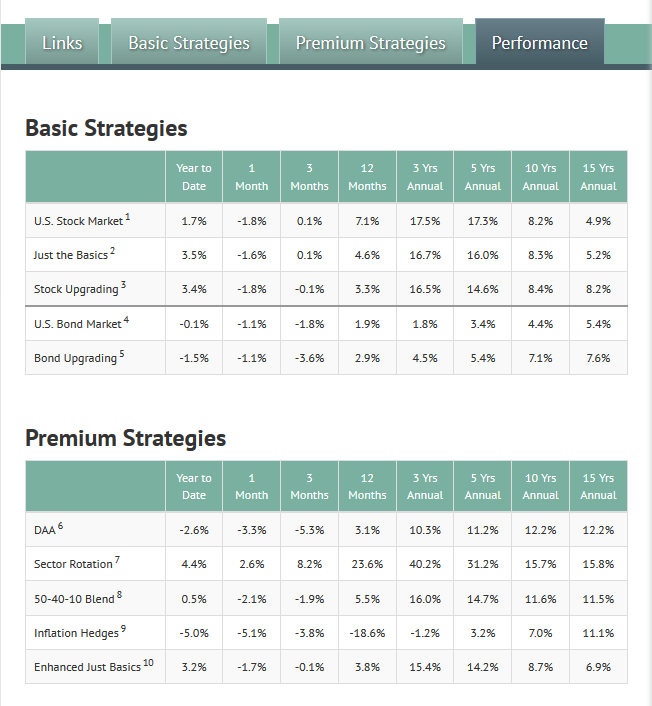