It sounds crazy, but it’s true: this year, investors have been better off getting their income from stocks and their capital gains from bonds. Both are a function of the stunning bull market in bonds and illustrate how the decline in foreign interest rates has pulled U.S. bond yields to lows few imagined they would ever see.

During the first quarter of 2016, the U.S. stock market provided some fireworks in the form of a significant selloff followed by a recovery rally. During the second quarter, however, stocks were largely flat, at least until the end of May when speculation over the Brexit vote (British exit of the European Union) started to pick up. Stocks rallied into early June, only to drop sharply (-5.4%) when the surprising Brexit result came in. The downturn was short-lived, however, as U.S. stocks rallied back in the closing days of June. Altogether, the U.S. market finished the second quarter up a respectable +2.8%.

But it was the bond market that really turned heads during the second quarter. At the beginning of 2016, the 10-year U.S. Treasury yielded a historically-low 2.27%. By the end of the first quarter, it had fallen further, to 1.78%. And by the time the dust settled post-Brexit on June 30, the 10-year Treasury had plunged all the way to 1.49%.

Sometimes the impact of a move gets lost when the numbers get really small (or really big), so here’s another way of saying what’s happened in the bond market. Again focusing on the benchmark 10-year Treasury yield, it fell 16% during the second quarter, and was down 34% at the midpoint of the year. Those are surprisingly large changes in yield for such a short period of time.

For those who don’t often think about bonds and interest rates, the most important point to understand is that when bond yields go down, bond prices go up. (For more information, see Find Bonds Confusing? Here Are the Basics You Need to Know. Scroll down to “Bond risk #2: Getting locked into a below-market yield.”) So these plunging yields mean that bond investors have been doing very well. While corporate and other types of bonds haven’t performed as well as U.S. Treasuries, they’ve still benefited from falling interest rates.

Add it all up and the broad U.S. bond market was up +2.3% during the second quarter and up +5.5% for the year through June 30. Those are impressive results, particularly given that rates were already so low and seemingly didn’t have much further to fall.

SMI includes an updated performance table on the back cover of each monthly issue (it’s also available on the homepage of the SMI website for members who are logged in — look for the "Performance" tab just below the four small pictures). This table expands the previous reporting of SMI’s strategy results to include all of SMI’s strategies and is updated every month rather than quarterly. Referring to that table may be helpful as you read this article.

Investors who choose index funds, including those who follow our JtB recommendations, know that their experience is going to be essentially the same as the overall market. So it’s not surprising that the two U.S. stock components of JtB combined to gain +2.9%, slightly more than the broad market’s +2.8% advance. JtB overweights smaller stocks relative to larger stocks, and smaller stocks performed slightly better during the second quarter, so that makes sense.

But, as Paul Harvey might have said, here’s the rest of the story. While U.S. stocks quickly recovered from the Brexit speed bump, foreign stocks haven’t fared as well. As of June 30, stock markets in other developed nations were still down almost 5% from where they stood a week earlier prior to the Brexit vote.

So after accounting for JtB’s 20% foreign allocation, the strategy’s performance for the second quarter dropped to +2.4%. That’s still a decent quarter, but it lagged the U.S. market slightly.

The quarterly story was similar for Stock Upgrading. The strategy’s four domestic stock categories combined for a gain of +2.6%, similar to the market’s gain of +2.8%. Unfortunately, that ignores Upgrading’s foreign component, which lost -1.1%. That’s a milder loss than we would have expected given how bleak things looked immediately following the Brexit vote, but it was enough to drag Stock Upgrading’s quarterly return down to +1.9%.

Digging further into Stock Upgrading’s results, our large-growth group (Risk Category 2) was a conspicuous laggard. While the other three domestic categories earned positive returns of +3.1%, +2.5%, and +3.4%, Category 2 earned only +1.4%. Two of the funds in that category were new recommendations in March, but they weren’t the problem, as one was a great performer (+5.8%) and the other only slightly underperformed (+1.8%). It was Polen Growth, replaced in last month’s July newsletter, that dragged down the group, losing -3.0%.

It’s been frustrating watching Stock Upgrading’s struggles since stocks began to stall in late 2014. Hopefully, with the market breaking out to fresh highs in July, Stock Upgrading will be able to get back on track. The first of the market’s two corrections happened last August, so that data will soon drop out of Upgrading’s one-year momentum calculations for evaluating funds. As that happens and February’s correction data ages, we may see some more aggressive fund selections, which should benefit Upgrading if the market follows through on its recent strength.

As we’ve already discussed, the bond market has been off to the races so far in 2016. The downside of that is it means bonds don’t yield much anymore, leaving income-seeking investors with few good options. The U.S. bond market gained +5.5% through midyear, compared to +4.0% for the stock market. Adding to the abnormality, the 10-year Treasury bond currently yields only 1.48% while the S&P 500 stock index’s yield is higher at 2.01%.

These unusual relationships are bound to cause distorted investor behavior, and they have. Traditional “widows and orphans” utilities stocks — the type that pay solid dividends — have been bid up like rock stars. In fact, the collective price/earnings ratio of the utilities sector is now higher than that of traditionally high-risk/high-reward technology sector! (The P/E ratio is a value benchmark used by investors to assess whether a stock is reasonably priced. It’s calculated by dividing a stock’s price by its earnings for the past four quarters.)

Most of this distortion can be traced to the policies of the world’s central banks. The U.S. Federal Reserve deserves its share of the blame for starting the whole “Quantitative Easing” trend that flooded the economy with new money and drove down interest rates. But whereas the U.S. ended its QE policies in the fall of 2014 (not coincidentally, the point at which many U.S. stocks topped out and started moving sideways), the rest of the world’s central bankers have continued their QE push. This has culminated in a situation where roughly one-third of the world’s government debt currently carries a negative interest rate. (Strange as it sounds, this means investors don’t receive interest on the bonds they buy. Rather, they pay the governments for the privilege of buying their bonds!)

When European and Japanese bonds provide negative yields, despite their economies being in generally worse shape than the U.S., it’s no surprise that a huge amount of foreign capital would shift to U.S. Treasuries instead. Treasury yields may be small, but at least they’re positive! It’s this huge global demand for U.S. Treasuries that has driven their yields to such incredibly low levels.

SMI’s Bond Upgrading strategy was the beneficiary of this trend during the second quarter, matching the broad U.S. Bond Market’s gain of 2.3%. Bond Upgrading is up over 5% so far in 2016. That’s an amazing — and slightly scary — figure, given that bonds are yielding so little. That means the bulk of these gains have come from capital gains appreciation, which can reverse should yields rise. 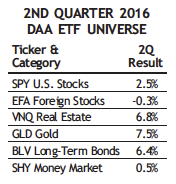 After enduring several whipsaws over the previous 12 months, DAA investors were rewarded with exceptional returns during the second quarter. DAA soared +6.9%, outperforming both the stock and bond markets by wide margins. Those returns were propelled by DAA’s holdings in gold, which rose sharply, as well as from long-term bonds and real estate (both of which respond positively to falling interest rates).

DAA also proved its mettle as a shock absorber in times of market crisis in the days following the Brexit vote. While U.S. and foreign stocks were selling off at panic levels (foreign stocks opened the morning after the vote down more than -8%), DAA’s holdings were gaining value. It was quite a sight to see U.S. stocks down -2.7% and foreign stocks down -6.2% the day after the Brexit vote, while DAA was up more than +4%. Thankfully we haven’t experienced any major market crises since DAA’s introduction in 2013, but the Brexit vote provided a reminder of how unhinged markets can suddenly get. It was comforting to see DAA function as it was designed to, offsetting those losses and stabilizing our portfolios.

SR was the biggest winner among SMI’s strategies this quarter, leaping ahead by +10.3%. That’s somewhat surprising, given that the strategy was invested in the normally bland telecom sector. But as we discussed earlier, with investors so starved for yield these days, stock sectors such as telecom and utilities that pay reliable and generous dividends are being treated like high-fliers. It’s encouraging to see that SR’s systematic approach can find the winners wherever they reside. The specific sectors we invest in have varied widely over time, but the results have been strong and consistent.

This portfolio refers to the specific blend of SMI strategies — 50% DAA, 40% Upgrading, 10% Sector Rotation — examined in detail in our May 2014 cover article, Higher Returns With Less Risk: The Best Combinations of SMI’s Most Popular Strategies. It’s become the poster-child for the type of diversified portfolio we encourage most SMI readers to consider. (Blending multiple strategies adds complexity. Some members might want to use an automated approach.)

As we saw in the days following the Brexit vote, the markets can shift suddenly between rewarding risk-taking and punishing it, so a blend of risk-courting and risk-averse strategies can help smooth your long-term path and promote the type of emotional stability that is so important to sustained investing success.

Not surprisingly, with DAA and SR outperforming the market by wide margins and Stock Upgrading holding up reasonably well in spite of its foreign holdings, a 50/40/10 portfolio did very well in the second quarter, gaining +5.2%. Through the first half of 2016, it leads the U.S. stock market +4.7% to +4.0%, while also having provided substantially more protection from market risk (as a result of its DAA core).

The performance of the three strategies included in the blend will vary significantly over time, but a portfolio diversified among them will smooth the ride along the way. Whether you’re using this specific 50/40/10 blend or a different allocation combination tailored to your specific risk preferences, we think most SMI readers can benefit from combining these strategies in some fashion.