Home > Articles >Riding Out the Storm

Riding Out the Storm

The longer I'm in the investment business, the more convinced I am that whether an investor succeeds or fails is driven far more by behavior than by knowledge. Knowledge is important, as it provides the confidence to do the right thing even when it's hard. But all the knowledge in the world won't save you if you simply don't follow through in the heat of battle.

This truth shows up clearly in Dalbar's studies of investor behavior. The latest, which runs through 2011, shows that over the past 20 years the average equity investor earned 3.5% per year. This during a period when the S&P 500 gained 7.8% per year. Even more amazingly, the average fixed-income investor gained just 0.9% per year over the last 20 years, while the Barclays Aggregate Bond Index averaged 6.5% annually! One might assume that fixed-income investors would be more likely to buy and hold, but clearly that is not the case. The evidence is that investors of all stripes are dramatically underperforming. 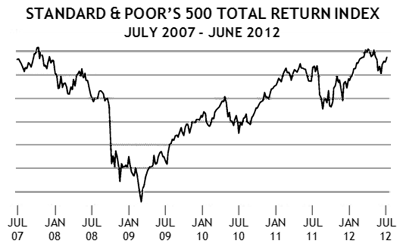 Given that buying simple index funds would guarantee results reasonably close to the market averages, something must be going horribly wrong in the average investor's process. Dalbar attributes the bulk of this problem to investors doing an exceedingly poor job of trying to time the market — specifically "abandons investments at inopportune times, often in response to bad news."

The simple truth that investing is relatively easy to learn but exceedingly difficult to execute is what drives SMI's relentless focus on each reader creating a personalized, long-term investing plan, and then following through on it regardless of what the market is doing. We focus so much of our effort on encouraging you to stick with your plan because this is precisely where the research shows you're most likely to sabotage your long-term results!

The chart above shows the performance of the S&P 500 stock index (with dividends reinvested) over the past five years. It's worth noting that the last bull market peaked in early October 2007, so it's not far from the mark to regard this chart as showing what the market has done since that all-time high was set.

Let's quickly review what we've experienced during this extraordinary period:

Given these two sobering facts, we should pity the poor investor who was putting money into the market at the last peak and likely suffered devastating losses, right? Wrong. While the S&P 500 index is still below its October 2007 peak level, if dividends are included, an investment in the index made five years ago would have a small profit. Despite the worst recession and the worst bear market in a generation, investors who simply rode things out were back in the black in five years! That's incredible.

This is why SMI always encourages making only relatively modest adjustments in any effort to sidestep market danger. Even SMI's Bear Alert Indicator was designed, not with the end goal of helping readers get out of the market, but to help readers stay in the market. When readers know they will have a warning and an opportunity to temporarily lower their stock allocation (if they so choose), they can avoid a greater misstep — completely abandoning their stock allocation, and their long-term plan along with it.

Investors would be well advised to take some advice from James, who cautions (loosely translated): "Do not merely read the plan, and so deceive yourselves. Do what it says.... But whoever looks intently into the plan that gives freedom, and continues in it — not forgetting what they have read, but doing it — they will be blessed in what they do" (James 1:22,25).