Rarity Of Average Returns / Why Foreign Stocks Will Be Increasingly Prominent

Two quick hitting stories of interest for you today.

First, we've noted this before, but it's worth pointing out for newer readers. That 8%-10% annual return you (and everyone else) are expecting from the stock market? Forget about it, at least on a calendar basis. 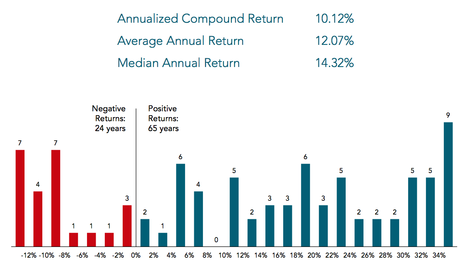 Ironically, the only area of the chart with zero instances is the one spot most investors expect their returns to cluster: that 8%-10% zone!

Now, as Barry Ritholtz points out, when you look at "rolling 12-month periods" rather than calendar years, this anomaly disappears. But the overall point remains: average is exceedingly rare. If you're going to be invested in stocks, you need to be prepared for huge swings in year to year performance.

This leads to all sorts of important lessons: the importance of diversification, why SMI tells readers not to invest in stocks unless they can give the investment 5-10 years to let that annual volatility merge toward a more long-term average, the danger in projecting recent performance into the indefinite future, and so on. It also explains why you frequently see us using rolling periods in our newsletter analysis.

Why Foreign Will Be Increasingly Prominent

SMI doesn't spend a lot of time discussing big picture narratives related to the investing world, preferring instead to let the market itself, through recent price momentum, tell us what's happening and where we should be positioned. That type of "trend following" is central to virtually all of SMI's strategies (with the exception of Just-the-Basics, which doesn't really change at all).

This type of investing approach is pretty rare, actually. Most investment advice is based on someone's view of what is likely to happen in the future. Based on that, a portfolio is constructed to take advantage of that anticipated view of the future.

While we don't do that, it's not as if we don't keep an eye on big picture themes as they emerge. One example of such a theme has been the idea that central bank liquidity would push the current bull market further, and make it last longer, than many people expected. It's not as if we changed any of our actual investment strategies as a result of that view, but that expectation has informed our commentary for the past few years, encouraging readers to stay positive on the market.

Another big picture theme we've discussed a little over the past several years that hasn't really manifested to a significant degree yet is the expectation that foreign stocks will play an increasingly important role in our portfolios in the decades ahead. This is a much longer-term theme that isn't likely to move in a straight line. But over time, it seems inevitable.

We've discussed the reasoning behind this before, so I won't belabor the point here. But for those who are interested in why we think this is likely, I recommend watching (or reading the transcript) of this TED Talk by Niall Ferguson titled The 6 killer apps of prosperity. The video is 20 minutes long, but you can probably read the transcript in less than half that if you're so inclined. I found it quite compelling.

It's a great summary of "The Great Divergence" — why Westerners so completely dominated economically from 1500 until just a few decades ago. More importantly, it's an explanation of the factors behind "The Great Reconvergence":

This is the Great Reconvergence, and it's the biggest story of your lifetime. Because it's on your watch that this is happening. It's our generation that is witnessing the end of Western predominance. The average American used to be more than 20 times richer than the average Chinese. Now it's just five times, and soon it will be 2.5 times.

This isn't about the fall of western civilization or anything doomsday. Rather, it's about recognizing that there are economic winds blowing throughout the world that are going to matter to us as investors in the decades to come. Capitalizing on those is going to require us to think outside of our "home field" playbook in order to avoid missing out on some big opportunities. That doesn't necessarily mean making any big changes right away, but rather keeping an open mind about increasing our foreign exposure in the years ahead. DAA is already set up for this shift, with the ability to put one-third of its holdings in foreign stocks. It wouldn't be surprising at some point down the line if our Upgrading exposure heads in that direction (which would be roughly double the foreign stock exposure it has at present).