Over the last three trading days (Thursday, Friday, Tuesday), the tech-driven Nasdaq stock index had its most dramatic selloff since March. I believe I saw somewhere that it was the fastest plunge from an all-time high to -10% correction territory ever, which wouldn't be a surprise given that everything in 2020 seems like it has unfolded at warp speed!

The S&P 500 was down a bit less, but even there, a -7% drop in three days is enough to cause investors to reach for the air-sickness bag.

So how did you handle the market's mini-correction? Were you blissfully unaware? Did it stress you out?

These are important questions, given the potential that what we just experienced was a dress rehearsal for another round of equity turbulence. As fun as August's huge gains were (+9% for Stock Upgrading, +18.6% for Sector Rotation), they were just the latest sign of a market that sure feels as if it's been getting bubbly.

We don't have to look far for proof. On February 12 of this year, just four days before the market would peak and begin its dramatic plunge, I wrote a post titled What Tesla & Buffett Tell Us About the Market. You can read the particulars, but the gist was that tech stocks — exemplified by Tesla — had been going absolutely crazy, while Buffett's supposed favorite indicator, total U.S. stock market cap to GDP, was off the historical chart at an all-time high of 156%.

So what has happened since? Well, we've had a global pandemic and economic contraction whose only comparable in the past century is commonly known as "The Great Depression." But rather than stocks being down dramatically from their pre-COVID/recession highs, the markets have recently set even higher highs, following even more dramatic gains from tech stocks in particular! As it was in February, Tesla has again been the poster child for crazy parabolic behavior. And lest anyone be tempted to think this warning would have been helpful a week ago but has little bearing now, post-correction, I would just point out that the February 12 warning also followed a -20% drop in Tesla's stock — foreshadowing the bear market that lay directly ahead.

Regarding "The Buffett Indicator," February's then-all-time high of 156% looks almost quaint, as that ratio has since exploded to 177.4%. This far exceeds the prior peaks in 2000 and early-2020. As we've written many times in SMI, valuation is a poor guide as to when market trends will change, but an excellent guide to what returns are likely to be over the next several years. Unfortunately, to believe the next several years are going to produce strong gains for the stock indexes from today's levels, you have to believe that this time is dramatically different — that valuations have shifted to a totally different plane than they've been historically. That's usually a losing bet. 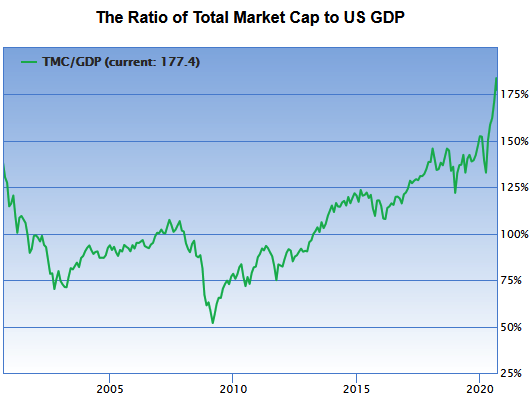 Clearly, the market's recent sharp correction doesn't mean the coast is now clear. That said, we also don't know that the past few days are anything more than an overdue correction after a blistering run higher in stocks. Hindsight may show us it was indeed the beginning of one of the great all-time stock market bubbles popping. But that's not clear today.

What is clear today is that the market has recently been exhibiting a number of warning signs. When stocks are at all-time highs, with significant signs of being bubbly, it's wise to at least pay attention when such signs start showing up.

Here are a few of these signs that have been grabbing my attention lately:

While there are plenty of reasons to be nervous about the near-term future of the stock market, there's also a less frightening explanation for the recent market correction. Simply put, when stocks scream higher for an extended period of time, they're going to correct eventually. In fact, yours truly just wrote at the end of August regarding the need for gold to pause and pullback last month in order to maintain its healthy bull market!

Ben Carlson recently wrote a great piece about how even the very best stocks suffer through massive drawdowns periodically. For example, he notes how Apple has gained roughly +19.5% annualized (!) since the early 1980s, yet has "fallen more than 75% on three different occasions and has been cut in half more times than you could count on one hand." He proceeds to walk through the other big tech names and their similar stories, as well as non-tech stars like Wal-Mart, McDonald's, Nike, and more.

Carlson's point is that if you want the big returns that stocks provide over time, you have to make peace with the fact that there are going to be serious bumps and bruises along the way. SMI investors have experienced this first-hand lately. It was no fun watching Sector Rotation drop -14.5% in four days over the past week, yet we're still up +7.25% overall in that same holding in less than a month-and-a-half.

However, it would be short-sighted to brush off the recent correction as "just one of those things investors have to deal with." It is that, but we've also seen tech stocks tumble -80% from past setups like this (2000-2002). We know that period kicked off a full decade during which the S&P 500 index had a negative return because we lived through that period!

So we're not nonchalant about the risk here. Thankfully, the SMI strategies wouldn't just sit tight through an extended downturn like the 2000-2002 bear market. We'd adjust our portfolios and hopefully avoid a significant portion of that downturn. But we shouldn't be naive either. It's important to actively manage the risk level of your portfolio and to use episodes such as we've just been through as a test of your emotional capacity to handle the existing risk level of your portfolio. If you struggled with that over the past week, that's a likely sign that your risk may be too high.

We don't know what this crazy market is going to do next and neither does anyone else. It soared when everyone thought it would crash, so it shouldn't surprise us if it crashes now that everyone thinks it will keep soaring! It may not do either. All we can do is stay true to our disciplined process and follow the trends where they lead. As best we can, each of us needs to do that with one eye firmly fixed on our individual risk level, making an effort to keep that as reasonable as possible within the context of still following our plan. Easier said than done, but nobody said this path would always be easy.