This bear market has brought the "shock and awe," producing huge moves with breathtaking speed.

As we noted in the April Editorial, the speed of its descent into bear market territory was unprecedented, taking just 16 market sessions to fall from an all-time high to the -20% bear market threshold. From there, it required just seven more sessions to hit what is, at least for now, its low point of -35%. Considering that it has taken roughly eight months on average for new bear markets to reach -20%, plunging nearly twice as far in less than a single month is beyond anything anyone has seen before.

Then, as rapidly as the market fell, it shot higher again. From its low on March 23, the market needed just three weeks to retrace 50% of its decline.

While the speed and scope of these moves have been incredible, the relationship (or scale) between the decline and rebound hasn't been particularly remarkable. Very early on in this bear market (March 4), I posted the following chart of the 2007-2009 bear market, noting that bear markets are famous for huge, fast counter-trend rallies. 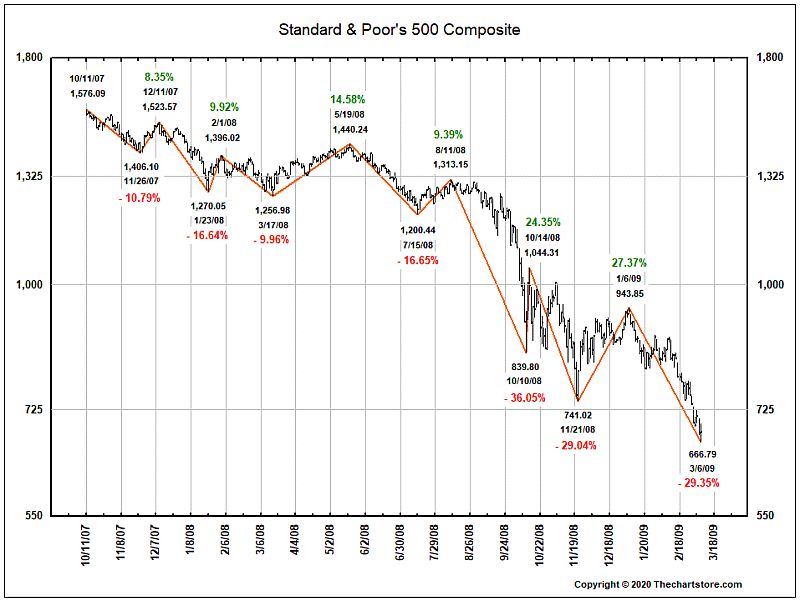 Remember, each of these counter-trend rallies ultimately failed, with the market rolling over again to produce lower lows.

This provides crucial context as we evaluate this bear market's rebound of roughly 50% from its low. Yes, the ground covered has been vast and the speed amazing. But is a 50% rebound from a bear market decline particularly impressive? The record from the last bear market shows it is not.

Riding with the Fed

That does not, however, necessarily mean that this rally will fail and the bear market will go on to set further lows. Recapping my thoughts from last week in What We Know & What We Don’t, I believe we still have 3 big "unknowables" that have huge implications for the market:

There are fairly easy-to-imagine positive and less-positive futures we could construct around each of those points. More important than how likely is each of those possible futures is the fact that it's simply impossible to know at this point. Unless you know, for example, whether we'll have another wave of the virus in the fall, you can't possibly hope to model how the economy will respond, or how that gap in output will compare to the scope of the Fed's actions. You should greet certainty regarding the future of the economy, and by extension the markets, with extreme skepticism at present.

What we do know is that the S&P 500 index is back to the levels it traded at last June, and the tech-heavy Nasdaq is back to its October 2019 levels, after the Fed Repo liquidity had already started juicing the market's final leg higher. Given what we do know about the impact the COVID-19 shutdowns have had on the global economy already, and the uncertainty still surrounding the future, it seems quite clear that investors are making two key assumptions at this point.

First, they're assuming a relatively optimistic conclusion to the economic "unknowable" above. If anything other than a relatively quick return to "normal" for the economy is in the cards, it's hard to justify tech stocks trading at the same level of just six months ago, a time when the market was already widely acknowledged to be priced for perfection. What we've seen since then is virtually the polar opposite of perfection, yet prices are the same now as then?

Second, it's clear the markets are betting heavily that the Fed's response is going to be "bigger" than this crisis. It's hard to blame investors for this one, given the Fed has ultimately stopped every market decline over the past dozen years via similar actions to what they've done lately. Without knowing how deep an economic hole is ultimately going to be created, it's impossible to judge yet whether the Fed's actions can effectively "fill" that hole. But the market clearly seems to be re-pricing the best-case scenario: the virus is receding, the economy will get back on track quickly, and the Fed has come in with all its guns blazing.

We've seen this bear market evolve through two distinct phases so far. First, we had the "panic" phase when everything was being sold indiscriminately. Since March 23, we've experienced the "hope" phase — things are getting better, the worst is behind us, the Fed has our back.

What I suspect (but don't know!) is that we're approaching the "reality" phase of this bear market. This is the phase when the economic reality we're facing gradually becomes clear. How long a process that is depends to a great degree on how the three "unknowables" listed earlier resolve. If we get a quick resolution to the virus and economies open back up and don't need to be shut down again, the current market optimism may prove justified. Anything less than that probably means this rally fails and at least some degree of retesting lower market levels is likely. And if there's any legitimately bad news mixed in there that makes it clear this is going to be a prolonged process measured in months rather than weeks, there's absolutely the potential for the market to re-test the prior lows and even exceed them.

Relying on our instrument panel

Everyone craves certainty, which is why there are a lot of big voices out there making bold claims about what the future will look like. Don't be fooled — they don't know either. As Dr. Fauci has said, "You don't make the timeline; the virus makes the timeline."

We can be reasonably certain that eventually things are going to go back to something resembling the old normal. But how long that takes is up in the air, which means successfully navigating the period ahead is going to require patience. Guessing at this point is a mistake because the potential outcomes are still too varied and extreme. At times like this, my rule of thumb is simply this: while opportunity costs (missing out on potential gains) are disappointing, capital losses can be devastating.

Thankfully, SMI's strategies are positioned well for this type of uncertainty. They've clearly become much more conservatively positioned, yet they've still got enough market exposure that we're participating in the market's upside. We're not "all in" or "all out" and we're not guessing as to how this is all going to resolve.

Instead, we're relying on the objective instrument panel our strategies are built upon to decipher the market's longer-term trend and adjust our exposure appropriately. Much as a pilot trusts his instrument panel to guide him when enveloped in fog, we're relying on our instrument panel to guide us through the current economic uncertainty. The fact that investors invariably are caught leaning the wrong way emotionally at every step along the way reveals the wisdom of this approach. But that doesn't mean it's easy. It's still emotionally uncomfortable to wait for these longer-trend signals to occur, especially with the market still swinging wildly day-to-day.

I'll wrap up with one final thought along those lines. Keep in mind as stocks continue to bounce up and down multiple percentage points each day, that even on good days when the market is up 3% (as it was yesterday) — that's still exceptionally high volatility. And volatility remains a hallmark of bear markets. While upside volatility is obviously more fun than downside volatility, this is still classic bear-market behavior. Until that volatility abates and some of these "unknowables" begin to resolve, it's perfectly appropriate to maintain some hedges in case the current "best case" resolution doesn't come to pass.