Home > Articles >No Such Thing as “Normal”

No Such Thing as “Normal”

By all accounts, 2008 was a most unusual year. The economy and financial system were rocked with abnormal events, and the prices of most financial assets fell sharply.

Ever since, many have been eagerly anticipating a time when the markets return to normal. Some may even have sold all their stock holdings at that time, and are still waiting until normality returns so they can get off the sidelines and invest again.

There’s only one problem: when it comes to the investment markets, “normal” conditions don’t exist. A generation of investors has been taught that “the stock market averages gains of +10% per year.” Never mind the fact that this statistic applies to only one portion of the stock market — the largest companies that make up the popular S&P 500 index. More importantly, investors have failed to learn how those returns are experienced in real time. We suspect that even among SMI readers, what follows will be something of a surprise.

One by-product of repeatedly hearing that the market earns roughly +10% annually on average is that many investors assume that’s what a normal year looks like. But as the chart below shows, expecting the market to gain somewhere around +10% most years doesn’t match the historical record at all. 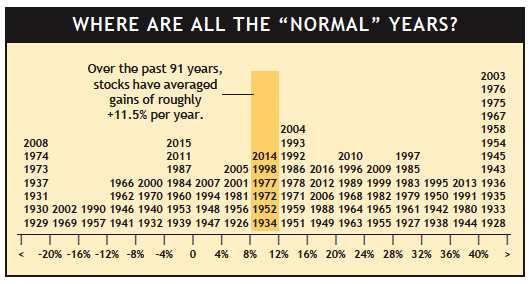 The chart assigns each year since 1926 (when the data series first began) to the column reflecting the stock market’s return for that year. The returns are based on a portfolio composed of one-half large company stocks and one-half small company stocks. Because smaller companies have historically turned in better long-term performance than large ones, you’ll see that the long-term average annualized return of this portfolio is +11.5% (as opposed to the +10% earned by the S&P 500 index). This “small-company advantage” is the reason SMI allocates half of the U.S. stock component to smaller companies in our Just-the-Basics and Stock Upgrading basic strategies.

If stock market returns were “normally distributed” around the market’s long-term average gain, the chart would form the familiar looking bell-curve shape that most investors intuitively expect. Most of the years would be clustered around the middle “8%-12%” column, with increasingly larger gains and losses becoming less frequent as you moved further away from the average. But that’s not what the chart shows! Rather, it shows a relatively even distribution across a surprisingly wide spectrum of annual performance.

Last month, we used this same data (from Ibbotson Associates) to demonstrate howstaying invested in stocks over extended periods of time increases the likelihood of achieving normal returns. But those returns approach normal only when annualized over periods of many years. The individual year-to-year returns within those longer periods are quite volatile.

The point is this: longer investment time horizons do help accomplish the goal of realizing “normal” long-term returns. But they do so by accumulating a wide variety of annual returns, whose unpredictability is the only “normal” characteristic they have in common. One implication of this is that it is nearly impossible to achieve the type of long-term results most stock investors desire without having to deal with the type of short-term volatility the chart portrays.

How long is the “long-term” required to achieve the roughly +11% average return of the past several decades? That depends on how you look at it. In last month’s Level 3 article, we saw that average annualized returns begin to gravitate toward the 10%+ range once holding periods reach 5-10 years. This is why we’ve frequently used those holding periods as cutoffs for defining if money should or should not be invested in stocks.

Again, what most investors fail to understand about investing in stocks is that years with +8 to +12% type returns are few and far between. Look at the chart — it’s happened only six times in the past 91 years! Instead, what most investors think of as extreme years happen much more frequently than most expect. These rather extreme returns generated during long bull periods (1982-2000, 2009-2016) and sharp bear markets (2000-2002, 2007-2009) combine to produce the long-term average that investors have come to depend on.

So, while it’s reasonable to assume a diversified stock portfolio will produce rates of return in the +8% to +12% range, just don’t plan on those returns arriving “normally."