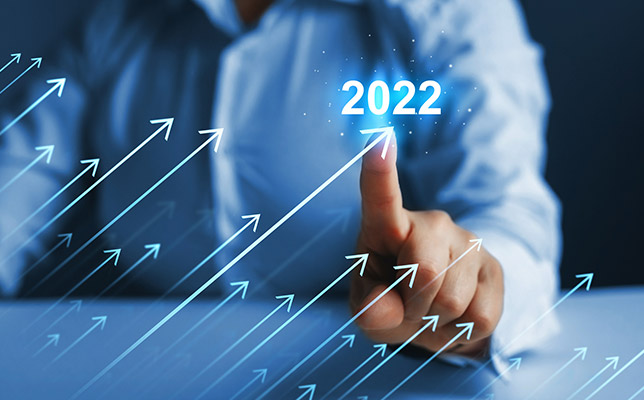 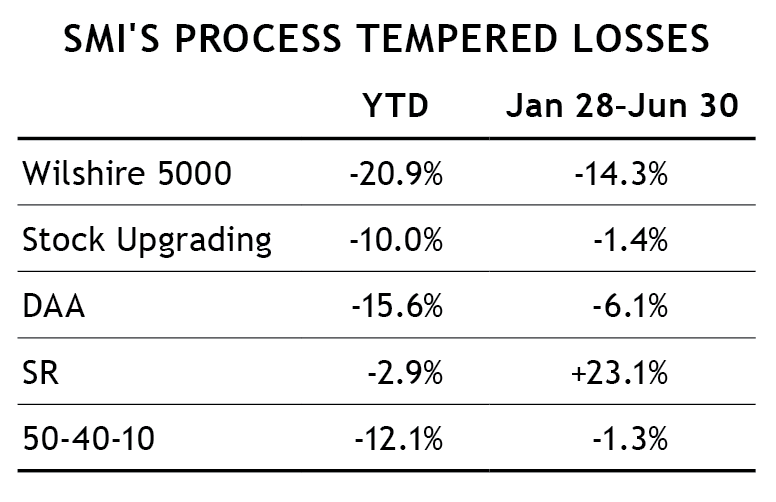 A brief overview of each of the strategies follows below. But we’d like to also direct your attention to bit.ly/SMI-mid-year-video where a more detailed video presentation is available.

The Year-to-Date (through 6/30) return for Just-the-Basics (–22.8%) does not reflect the defensive adjustments to cash that Stock Upgrading investors made through the first half of 2022. That’s the primary reason why the gap in returns is so large (–22.8% vs. –10.0%). Other factors included Stock Upgrading’s ability to pivot out of growth stocks at the end of January as well as its 10% allocation to commodities, which gained +28.3%during the first half of the year while stocks were falling sharply.

As is often the case, it wasn’t one thing that caused Stock Upgrading to hold up so much better than the broad market during the year’s first half, it was a combination of factors. Diversifying into commodities, pivoting to value stocks and away from growth, and ultimately shifting gradually into cash all played a role in Upgrading’s outperformance.

As it became increasingly clear that last year’s “transitory inflation” narrative was false, the Fed found itself way behind the eight ball in terms of raising interest rates. While the Fed wouldn’t announce its first hike until March, the bond market started pricing in higher rates much sooner. The 10-year Treasury bond, which started 2022 at 1.63%, rose as high as 3.49% by mid-June. The rate of increase was even more dramatic with short-term interest rates, as the 6-month Treasury Bill leaped from 0.22% to 2.51% during the first half of the year.

Bond Investing 101 says that when interest rates rise, bond values fall. And fall they did, as the Bloomberg U.S. Aggregate Bond index lost –10.35% during the first half of the year. As is typically the case, longer-term bonds fell even more, roughly -20%, which was as bad as the S&P 500 index!

Thankfully, Bond Upgrading had SMI investors positioned largely in short-term bonds throughout the first half of the year. Our main Upgrading recommendation, Vanguard Short-Term Inflation-Protected Bond (VTIP) drastically reduced our losses, falling only –1.5%. Overall, Bond Upgrading declined –4.6%, which wasn’t fun but was less than half the loss of the broad bond market. 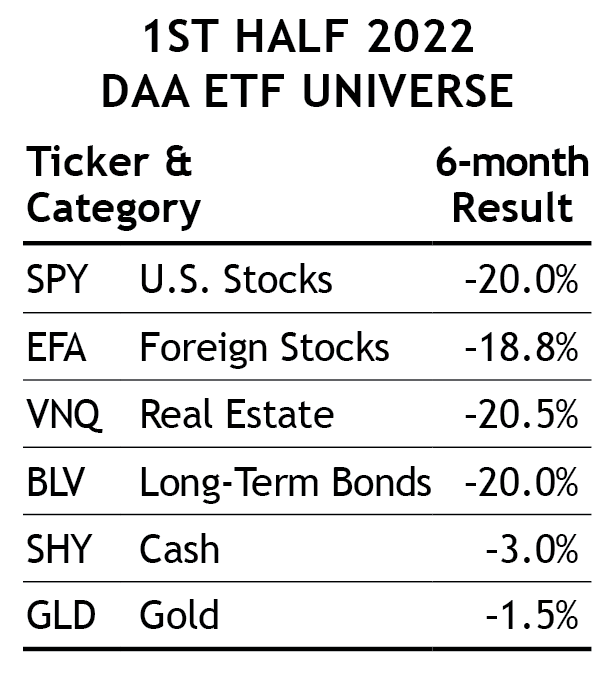 The historically bad performance of bonds meant that DAA wasn’t able to pivot as quickly out of other riskier asset classes as would normally be the case. That was a significant factor in DAA’s performance lagging both Upgrading and Sector Rotation during the first half of 2022 (although, at -15.6%, it still outperformed the broad stock market overall and fell less than half as much as stocks after adjusting its allocations at the end of January).

DAA finally reached its most conservative posture in mid-June, which contributed to it beating Upgrading and SR for the month. That’s more familiar ground for DAA during bear markets and we expect that to be more representative of DAA performance through the rest of this bear market.

While DAA didn’t hold up as well as we would have expected through the first phase of this bear market, SR held up much better than we would have thought. After pivoting to energy stocks at the end of January, SR was the star of the show (along with Stock Upgrading’s commodities position)

While energy stocks corrected sharply during the latter part of June, the fact that SR ran so far ahead of the broad market and was only down -2.9% overall during the first half of the year was a huge boost to SMI portfolios.

This portfolio refers to the specific blend of SMI strategies — 50% DAA, 40% Upgrading, 10% Sector Rotation — discussed in our April 2018 cover article, Higher Returns With Less Risk, Re-Examined. It’s a great example of the type of diversified portfolio we encourage most SMI readers to consider. (Be aware that blending multiple strategies adds complexity. Some SMI members may prefer an automated approach. See bit.ly/SMIPrivateClient.)

The "Tempered Losses" table tells the story for this blended portfolio of SMI strategies. Its ability to pivot from an aggressive portfolio allocation at the start of the year to an increasingly defensive one helped limit losses significantly, and nearly shut losses down entirely after the strategies began adjusting to the new market regime at the end of January. All three strategies played an important role in that performance: SR was especially strong during February-May while DAA was weaker than we would normally expect. Then DAA stepped up in June while SR corrected.

That’s the essence of diversification — finding portfolio components that zig and zag out of sync with each other to smooth the path of the overall portfolio’s performance.

The “buy every dip” bullish mentality that became so firmly entrenched over the past dozen years is proving difficult to displace, which has led to a number of sharp bear market rallies already. As this is being written in mid-July, another rally is underway. It’s already the fifth bounce for the tech-heavy Nasdaq index that has approached (or exceeded) +10% in this brief bear market. There were 15 such Nasdaq bounces of +10% or more in the 2000-2002 bear market, during which the Nasdaq index fell –80% overall!

While investors continue to get whipped around by this back-and-forth market action, SMI investors can relax knowing they are following a process that will keep them aligned with the dominant market trend.

The three most important factors as we head into the second half of 2022 are as follows:

All three of these factors are distinctly negative for asset prices. For these reasons, we continue to believe that emphasizing wealth preservation is the most appropriate focus at this point in the market cycle. When the Fed pivots from tightening financial conditions to easing them again, we’ll shift our posture. But with inflation still well above the Fed’s target rate of 2%, that pivot is likely some distance away, justifying our continued defensive positioning.