The fact that certain investments perform better or worse during certain types of economic/market conditions is both an opportunity and a potential pitfall.

It's an opportunity in that investors can potentially boost returns and limit risk by correctly identifying these conditions and acting accordingly. It's a potential pitfall because it's hard to actually do successfully. Many attempt to front-run these "macro" factors with little repeatable success.

The difficulty of consistently interpreting these macro signals correctly in advance, plus the fact that many of these conditions tend to persist a while once in place, is why SMI doesn't normally try to anticipate these shifts in market conditions. Instead, we measure and respond to them as they occur. SMI's trend-following strategies, using market momentum indicators of various types, help us to take advantage of these trends to at least a limited degree. By waiting for the trends to be measurably established before we act, we know we won't get the whole benefit of these moves. But we'll avoid many false moves and still capture much of the benefit of those trends that prove to be durable.

That said, there are some patterns that are so recognizable that we'll take a shot without waiting for confirming evidence first. One such pattern is the tendency of small-company stocks to outperform following significant economic recessions. SMI successfully played the small-cap rebound coming out of the 2000-02 and 2007-09 bear markets, leading to outsize returns in 2003 and 2009. So not surprisingly, we were fairly aggressive with it this year once again.

And for the most part, that approach worked. Being overweight small-caps boosted Stock Upgrading's performance under both the "old" (2020) and "new" (2021) configurations. From July 2020 – June 2021, Stock Upgrading was up +45.9% while the Wilshire 5000 gained +44.2%. Stock Upgrading was slow to get reinvested after last year's bear market and spent July 2020 largely in cash, but still managed to catch up to and pass the broad market's performance, despite carrying an underperforming foreign allocation (which was ditched with the reconfiguration in January). Upgrading was able to overcome the slow start and lagging foreign component primarily due to being overweight in small-company stocks.

The end of the re-opening trade

However, the re-opening trade appears to be winding down. (I'm referring here to the surge in stocks benefiting from the re-opening of the physical economy, which have tended to be more "old economy" businesses that largely fall in the value camp.) We've seen many commodities come down off their highs and growth stocks have recently been outperforming the value sectors that were so hot from November-March. Interest rates have seemingly confirmed a shift in future growth expectations. After the 10-year Treasury yield shot up to 1.75% in March when the optimism was highest around the economic re-opening, that rate has since fallen to as low as 1.15% this week as investors have been pricing in less optimistic future growth.

Where this contrast has been most vivid is in the gap between large- and small-company stocks. Consider the following data:

Since April though, small stocks have stalled. And starting in June, it's not just small-company stocks lagging — even among large stocks, fewer and fewer have been advancing.

Consider the following chart of the S&P 500 index (red line), which is weighted to give greater weight to the largest companies in the index, vs. the equally-weighted version of the same index (blue line, ticker: RSP). The dramatic plunge in the center of the chart is the June "Fed Flinch" when Chairman Powell indicated the Fed might not let inflation run as hot as investors had previously been led to believe.

From the S&P 500's all-time highs set immediately prior to that mid-June "Fed Flinch," notice that the red line (the broad S&P 500 index) has continued higher, while the blue line (the equally-weighted S&P 500) is now lower. 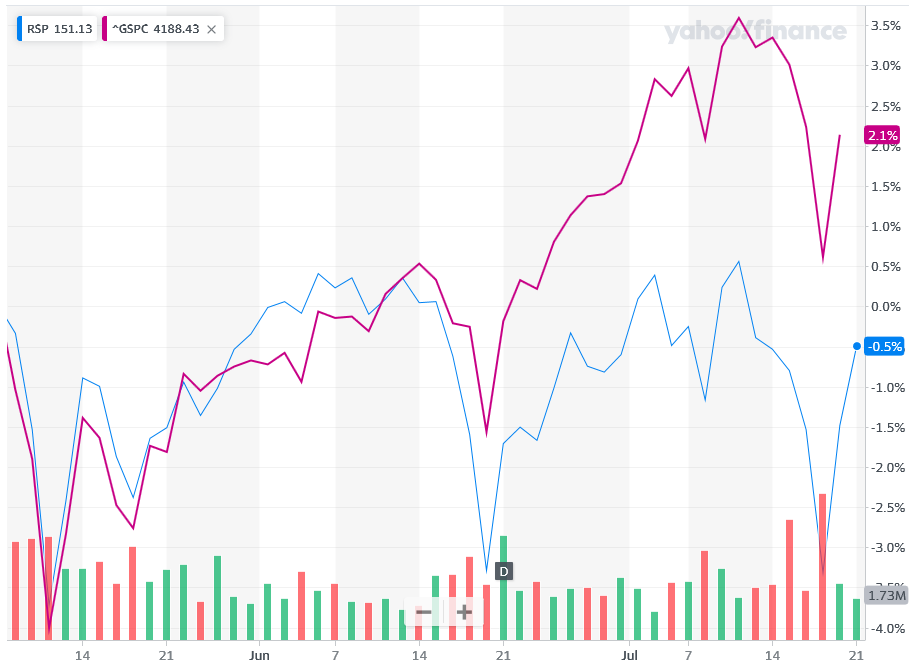 What this shows us is that while the largest stocks in the S&P 500 have continued to climb, the average stock in the S&P 500 has actually declined over the past several weeks. We saw from the table above that small company stocks have gone nowhere since April. This chart shows that this same behavior has infected the large-company S&P 500 index to a significant degree in recent weeks.

So what does all this mean? Should we be worried? Here's how I'm processing this information.

Long-time SMI members know that we typically take incremental steps, rather than adjusting everything all at once. So this isn't a call to run out and sell all your small-caps or other risky exposures. But it is recognizing a clear pattern we've watched unfold over the past few months. Starting with the most risky, speculative stocks (the SPACs and meme stocks), then moving to small-company stocks in April-May, and more recently extending all the way up into the bottom two-thirds (or more) of the S&P 500, we've seen fewer and fewer stocks participating in the continuation of this bull market.

That doesn't necessarily mean the end is near. But we've mentioned a number of times how a -15% correction in the second half of this year wouldn't be a surprise. The exact same thing happened at roughly this point in the economic cycle in 2010.

That doesn't mean it has to play out the same way this time, but there are certain factors that contribute to these cycles and events that make them more or less probable. In this case, the wearing off of fiscal stimulus, coupled with declining growth forecasts (not to mention the potential of renewed lockdowns due to the Delta variant) cast growing doubt about the rosy assumptions that have been priced into stocks since November.

Regardless of whether that type of normal market correction happens or not, it's clear that the market setup is riskier than it was earlier in the year. So it makes sense for us to respond — not by getting completely out of the market, but simply by shifting some capital from the riskier parts of the market (like small-company stocks) into safer parts of the market (like large-company stocks). If nothing else, Large/Growth stocks is where the better performance has been in recent months, so that's a momentum move we'd likely be making in the months ahead anyway.

The Outrageous Truth About...

SMI on the Radio: A Nervous...