Home > Articles >Life Insurance: Which Kind Is Right for You?

Life Insurance: Which Kind Is Right for You? 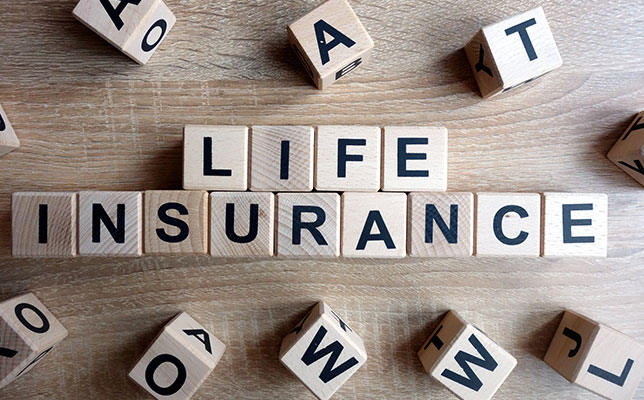 Life insurance is one of the few products people buy hoping they won’t need it — at least not anytime soon.

The basic idea behind life insurance is that if you die, the policy proceeds (the “death benefit”) will help provide for those you leave behind. But some types of life insurance go beyond just paying a death benefit. They act as a savings/investment vehicle, which creates an asset you can borrow against, and a holding you can liquidate if you don’t need the policy anymore.

The primary choice in life insurance is between “term” insurance (which expires after a defined period) and “permanent” insurance (which doesn’t expire until you do). Once you make that choice, there are further choices — such as the length of the term. Or, if you opt for permanent insurance, the choices include “whole life,” “universal life,” and “variable life.” (Whole life is the most common, but the others offer more flexible benefit/payment options.) And, of course, you’ll need to choose the amount of the death benefit.

The type of policy that’s best for you depends on what you want your life insurance to do. If you want an inexpensive way to provide for your loved ones in the event of your death, term insurance is the better option. The cost is based solely on life expectancy (with perhaps a small commission). Since the likelihood is that you won’t die during the policy period, and since term has no add-ons or extras, such insurance is relatively cheap.

Permanent insurance, in contrast, doesn’t expire, so the insurance company knows it will pay a claim at some point. That means the company has to charge a higher premium. Permanent insurance also includes extra features that term insurance doesn’t, which further increases the cost.

Although apples-to-apples comparisons are difficult because of the many variations in policies, a buyer typically will pay 8-15 times more for permanent insurance than for term insurance, even for policies that pay the same death benefit (see table below). 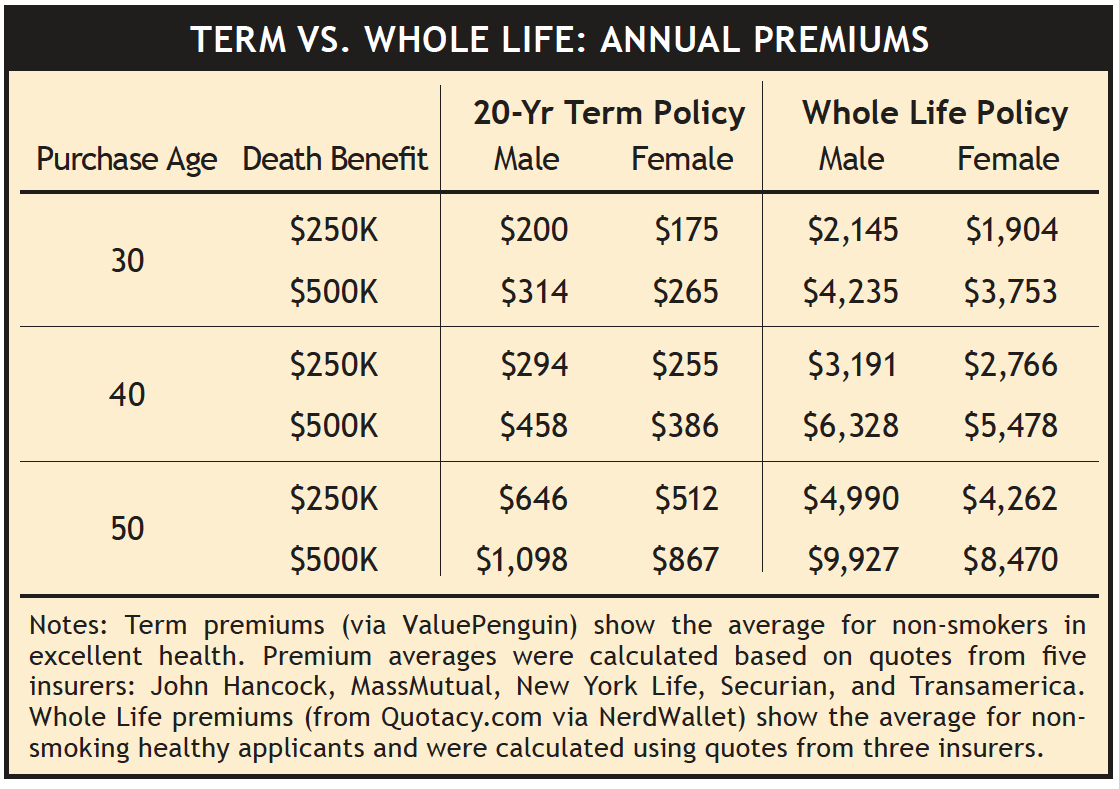 Term insurance is sometimes called “pure insurance.” All it does is provide a specified benefit if you die during the term of the policy (standard terms are 10, 20, and 30 years).

For example, for a policy that will be in effect for 20 years, a young buyer may pay a premium of $200 a year for a death benefit of $250,000. With most term policies, neither the premium nor the death benefit will change. Once the 20 years are up, the policy is terminated. Term policies don’t accumulate “cash value” — i.e., you can’t borrow against a term policy, and you can’t get money back if you cancel your coverage.

In some cases, a term policy can be renewed when it expires — with a heftier premium, of course. Also, some term policies are convertible to permanent insurance.

Premiums for term policies are based on the length of the term along with several other factors: age at the time of purchase, general health, gender (women pay less), occupation, and personal habits (premiums for smokers are about three times higher).

Permanent insurance: Extras at a price

In contrast to term insurance, permanent insurance provides both a guaranteed death benefit and something of value while you’re still alive. This type of insurance acts as a financial asset that accumulates “cash value” (funded by the higher premiums) as the years pass by.

Meanwhile, the policy's accumulating fund earns tax-deferred interest, typically with a minimum growth rate guaranteed (the average annual guaranteed rate is about 1.5% according to Consumer Reports). If you’re considering permanent insurance, compare a policy’s projected return to what you likely could earn by saving or investing in other ways.

In addition to the return generated by the accumulating fund, some whole-life policies pay tax-free dividends from the insurance company’s profits. These dividends can be paid out to the policyholder, used to defray the cost of premiums, or added to the policy’s cash value.

If desired, a policyholder can use the cash value (if large enough) to secure a preferential-rate loan from the insurance company. Should the policyholder die before the loan is paid (with interest), the death benefit will be reduced accordingly.

Reasons to go the permanent route

One reason people buy permanent insurance, despite its higher cost, is to guarantee future insurability no matter what health issues may occur.

Permanent insurance also can fill a role as a source of income in retirement, with withdrawals from a policy’s cash value supplementing other retirement income. (This has the downside of reducing the death benefit.)

Further, buyers increasingly are looking to permanent life insurance as a means of protecting against possible long-term care (LTC) costs. Some policies include the option of a low-cost “rider” that allows certain costs for long-term care to be subtracted from the death benefit (not from the cash value). To qualify for LTC benefits, the policyholder must be diagnosed with a chronic illness — such as cancer or Alzheimer’s disease — that requires long-term care. In essence, the policy’s death benefit is “accelerated” to pay for long-term care needs. (Accelerated benefits are allowed under some term policies, but typically only in cases of terminal illness.)

Although buying life insurance is never a one-size-fits-all proposition, term insurance is by far the more economical option. Many personal-finance experts recommend a death benefit of 5-10 times one’s annual gross income, which is much more affordable with low-cost term insurance. (Don’t neglect coverage for a parent who stays at home with children.)

Also, it is worth noting that the cash-accumulation options offered with permanent insurance are limited and low-paying. Purchasing a term policy and then saving/investing on your own, rather than via an insurance product, likely will yield a much higher rate of return.