Home > Articles >Leveraged Funds: Too Dangerous to Be Useful?

Leveraged Funds: Too Dangerous to Be Useful?

It’s the nature of the investing beast that the temptation to try to “get rich quick” is always lurking nearby. Our heads recognize the wisdom of Proverbs 21:5  — “Steady plodding brings prosperity; hasty speculation brings poverty.” But our hearts sometimes are seduced by the siren song of speeding up the process via a shortcut or two.

“Leveraged funds” are a good example of that type of hope. After all, our minds say, if investing in a certain mix of mutual funds is a good long-term idea, doesn’t it make sense that funds designed to earn twice their rate of return would be an even better idea?

These leveraged funds and ETFs (exchange-traded funds), often have “ultra” or “2x” in their names. (There is little difference between leveraged funds and leveraged ETFs. In this article, the terms are used interchangeably. Anything written about a leveraged ETF, for example, would also apply to a leveraged mutual fund.) They use derivatives and debt to “amplify” returns. For example, a leveraged ETF with a 2:1 ratio is designed to provide double the return of a specific underlying index — such as the S&P 500. Of course, this leverage works both ways, amplifying both gains and losses. With a 2:1 leveraged ETF, your gains will theoretically come twice as fast as the index it tracks.

Pick the right market direction and the gains can come quickly. Of course, if you get the market direction wrong, the losses can also mount quickly. (Bearish investors can invest in “short” or “inverse” leveraged ETFs, which are designed to return a 2% gain for every 1% loss in the underlying index. If the index gains, these funds suffer losses at double the index’s rate of gain.)

The “double-your-pleasure”/”double-your-trouble” nature of leveraged ETFs mean they are definitely not for the faint of heart. But there’s another characteristic that makes them especially dangerous for the average investor: gains/losses are amplified on a daily basis. What’s so dangerous about that? Let’s do the math.

Suppose you invest $100 in a 2x leveraged ETF that’s tracking the S&P 500. (Our example will use dramatic gains and losses to quickly illustrate the point, but a similar outcome is likely in real life, only more slowly.) On the first day you own the fund, the S&P gains 10%. In a traditional index fund, your holdings would be worth 10% more, or $110. But because you are invested in a 2x ETF, your holdings are now worth $120. Great! But the following day, the index loses 10%. In an ordinary index fund, your holdings would fall from $110 to $99. But because the S&P loss is being amplified by your leveraged ETF, your holdings lose 20%, falling from $120 to $96. In other words, after two volatile days — up 10% one day, down 10% the next — your losses are four times greater than the losses incurred by an investor in an ordinary index fund (he lost $1; you’ve lost $4).

Of course, things could get better as the days go by, but probability is not on your side. This example is continued in the table below, showing what happens to both a traditional index fund and a 2x-leveraged ETF when the hypothetical index they both track experiences six alternating days of 10% gains and losses. The regular index fund finishes this stretch with a small loss of roughly 3%. So it makes sense that the 2x-leveraged ETF would experience losses roughly double that, or 6%, right? 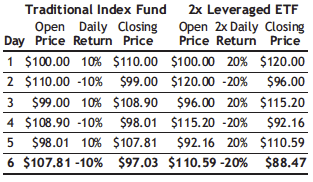 Wrong. The actual loss is much higher at roughly 11.5%. While the leveraged fund is accomplishing its stated goal — doubling the daily return of the index — it clearly is not accomplishing that goal over a longer time period, which is the faulty expectation of many investors buying these products.

So why does SMI still use leveraged funds?

First, it’s important to note that the only place SMI has ever used leveraged funds is in our most aggressive and risky strategy — Sector Rotation. Here’s a quick history lesson to explain why we continue to utilize them there.

Leveraged funds became “an issue” in 2009, when the Financial Industry Regulatory Authority (FINRA) issued a notice recommending that brokers and registered investment advisers steer average investors away from leveraged funds. “While such products may be useful in some sophisticated trading strategies, they are highly complex financial instruments,” the notice said. “Due to the effects of compounding, their performance over longer periods of time can differ significantly from their stated daily objective. Therefore, leveraged and inverse ETFs that are reset daily typically are unsuitable for retail investors who plan to hold them for longer than one trading session, particularly in volatile markets.”

FINRA offered this example of how a leveraged ETF can diverge significantly from the index it is tracking. “Between December 1, 2008, and April 30, 2009, the Dow Jones U.S. Oil & Gas Index gained +2 percent, while an ETF seeking to deliver twice the index’s daily return fell -6 percent.”

It’s interesting that FINRA chose an oil-and-gas example to illustrate their point, as SMI’s first huge gain after launching Sector Rotation in 2003 came in exactly such a fund: ProFunds Ultra Oil & Gas, which gained +84.7% for SMI readers between September 2004-February 2006. That said, our experience with that trade actually reinforces FINRA’s point about leveraged funds: while our leveraged fund made +84.7%, the non-leveraged Fidelity Select Energy fund earned almost exactly the same amount (+85.7%).

In fact, a closer examination of Sector Rotation’s past interactions with leveraged funds reveals that in most cases, the leverage did boost returns, but not nearly as much as might have been expected. Most of the leveraged funds SR uses are designed to earn 1.5x the returns of their sector. Usually, the actual advantage of these funds has been significantly less than that.

But every once in a while, the advantage of a leveraged SR fund has been huge. One painful recent example of that was SR’s biotechnology recommendation of February 2012-March 2014. Prior to that trade, when a leveraged fund was #1 in the SR rankings, we would make it the official recommendation while noting a non-leveraged alternative was available for those who didn’t want the additional risk.

However, responding to pressure from FINRA, most leveraged funds had recently raised their minimum investing requirements. The ProFunds line, which is what we include in the SR universe, had raised their minimum investment amount to $15,000 — a potential problem for smaller accounts, given that SMI has recommended limiting the SR allocation to not more than 20% of the stock portion of a reader’s portfolio.

So, in 2012, because of the bad press from FINRA and in an effort to avoid issues regarding the now-higher minimum investment requirement of leveraged funds, we decided to change our approach. Instead of making the leveraged fund our “official” recommendation, we made the non-leveraged fund the official fund and listed the leveraged fund as the alternate instead.

While it’s hard to say the result was disastrous, given that the non-leveraged fund more than doubled our money over the following two years, the leveraged fund did much better (+202.6% vs +115.5%). That’s right — the almost too-good-to-be-true returns you see listed in SR’s historical record would have been even better had we not temporarily swerved away from leveraged funds!

Overall, our experience with leveraged funds backs up the warnings regarding their risk. Most of the time, these funds don’t deliver the type of performance longer-term investors expect. As a result, we agree that most investors are wise to typically avoid them.

That said, within the strictly limited confines of our Sector Rotation strategy, we think the potential rewards of including leveraged funds outweigh the additional risks. Hopefully, any SMI member using Sector Rotation recognizes that it is a high-risk, high-reward strategy and is respecting the limitations we place on it within the context of a broader portfolio. We certainly try to keep its riskiness front and center, plastering risk warnings on virtually every mention of Sector Rotation.

In that context, the marginal additional risk isn’t so significant. Remember, the SR strategy itself is providing a timing mechanism of sorts, telling us when these particular sector funds are most likely to succeed, as well as providing a rigorous selling discipline to limit our losses once a sector’s momentum changes.

Our experience has been that utilizing the leveraged funds within SR, when called for, has generated similar returns in some cases, slightly higher returns in others, and occasionally massively greater returns. Because we’ve yet to see a case where the added leverage significantly hurt SR investors, we’re inclined to continue to swing at those leveraged-fund pitches in the hopes of hitting occasional home runs in the future.