Home > Articles >Investors at Risk, but of What?

Investors at Risk, but of What?

I came across an article this week by Eugene Steuerle, warning of "the biggest bubble yet." We read lots of articles and see lots of claims, but this one grabbed my attention due to the following graphic, showing the combined impact of stocks and housing on household wealth.

As many of you know, these were the specific causes of the last two bubbles/bear markets: in the late-1990s, stocks grew to unsustainable valuations, and a decade later a similar dynamic played out in housing.

This graphic shows each of those bubbles in terms of these two specific components, as well as "household net worth" (or wealth). All three of these measures are shown as they compare to gross domestic product (GDP), which is basically the sum of everything the country produces, or "national income." When wealth grows dramatically relative to income, it's a sign that valuations are probably getting overextended. The assets are getting expensive faster than the income is being produced that would support those higher valuations. 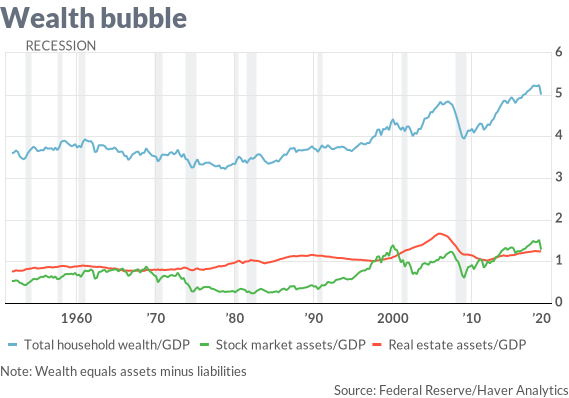 I don't remember seeing this infomation presented in this way before, with the stock market and real estate components clearly separate, yet their combined income on national wealth so clear. The important takeaway is where that "wealth"/income ratio sits now — at a level higher than it was both prior to the collapse of the late-90s stock market bubble, as well as a decade ago at the peak of the real estate bubble.

Steuerle notes that "The recent three bubbles share characteristics and causes unique to a modern period since about 1990." The reasons aren't necessarily important to this specific discussion, but some people mark the reaction to the October 1987 market crash as a turning point of sorts of Federal Reserve policy. The generally looser, supportive-to-financial-assets policy inclination since then would certainly support the author's observation that with each subsequent surge, wealth receded to a new higher level than before.

By analogy, consider a water table beneath a foundation that continually rises to new heights and recedes only to new higher lows. Previously the water found weaknesses in one set of cracks (tech stocks), then another (housing). Same cause, but a different point of initial break-through before the flooding affected the entire structure.

With the water table higher than ever, how sanguine should we be that the old break-through points have been sealed and that no new ones will be found?

Steuerle's conclusion is that, despite the best efforts of policymakers, "this modern, roller-coaster version of a Tower of Babel cannot reach ever heavenward."

Not surprisingly, not everyone agrees. The head of the world's largest asset manager, BlackRock's Larry Fink, says the market is at risk of a melt-up, not a meltdown. He cites the "record amounts of money in cash" argument as support that the market has further upside ahead as investors currently in cash put that money into stocks.

With over $6 trillion under management, this could be considered a case of a manager "talking his book" — he obviously wants stocks to go up and not down. I'm not particularly moved by the "cash on the sidelines" argument, as we've seen that trotted out any number of times over the years with a seemingly flimsy connection to future market action. (For one thing, it seems to escape many that even if there is cash on the sideline waiting to be invested, when those buyers purchase stocks, there will then be a seller of every share who will now have...cash on the sidelines.)

There are any number of indicators one can point to that indicate the stock market is vulnerable to a steep decline — at some point. The problem is always when. I'm not aware of any indicators with good past track records that are currently saying a downturn is imminent.

So we're left with a setup where a steep downturn could happen anytime, and is arguably likely to happen at some point in the not-too-distant future. But that's not exactly a new revelation, as those conditions have existed for a while now.

In situations like this, investors have to ask themselves how much they're willing to lose in pursuit of late-cycle gains. Sometimes those late-cycle gains can be significant — they certainly were in 1999. But there's no guarantee that the next bear market will be polite and unfold gradually enough for our strategies to step out of harm's way without suffering losses on the way out. So each investor has to strike an appropriate balance for himself or herself.

Thankfully SMI has protective protocols included in two of its main strategies, Stock Upgrading and Dynamic Asset Allocation, so most SMI investors can stay the course with their long-term portfolio mix without having to worry about making adjustments for current levels of market risk. The strategies handle that themselves. For those investing outside the SMI strategies though, perhaps through index funds in a company 401(k) plan or similar, our counsel is generally to err on the side of caution, knowing that missed opportunity costs (gains you didn't get as a result of being too conservative) tend to be less harmful in the long run than actual losses.