....The USA should always be paying the the lowest rate. No Inflation! It is only the naïveté of Jay Powell and the Federal Reserve that doesn’t allow us to do what other countries are already doing. A once in a lifetime opportunity that we are missing because of “Boneheads.”

Now before anyone panics, let me be clear. This is not a political article or commentary. We have zero interest in having a Trump debate — which is why you read very little Trump-related commentary here. Please read what follows through that lens — this is not about Trump, per se. (And please try to craft any comments with a similar "about the issues, not the president" point of view.)

However, the reality is this interest rate stuff — and especially the topic of negative interest rates — is tough for most folks to get their minds around. For one thing, it's all relatively new, so almost no one has experience or an established mental frame of reference for processing this information. We've written quite a bit about this recently (see here, here, and here), but understandably this topic remains confusing to many. 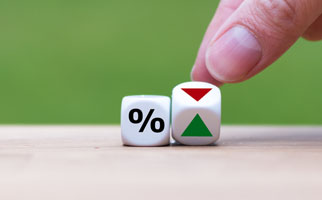 And second, there are aspects of this that seem like they should be true, but aren't necessarily. This is where today's Trump tweets come in.

One point of confusion stems from the fact that the way interest rates work for countries doesn't exactly parallel how they work for individuals. This is clear in the tweets above. With individuals, the most creditworthy get the lowest rates. Trump is clearly stating that, by extension, this means that interest rates on U.S. Treasurys should be lower than rates on other sovereign debt, because the U.S. is the most creditworthy.

Leaving aside the argument of whether the United States really is the most creditworthy nation given the state of our finances (because it's really not about that), this idea misses the point of how interest rates on sovereign debt get set. There is definitely a component of Fed involvement, as the "baseline" rate the Fed directly controls does play a factor in where the rates on longer-term U.S. Treasuries land. Trump knows this, which is why he's jawboning the Fed to reduce the Federal Funds rate.

But what this misses is the fact that interest rates for government debt are highly correlated to the growth prospects of each specific country. When we look across the Atlantic and see German bonds yielding negative rates across the entire yield curve, that is absolutely NOT a reflection that the bond market thinks Germany is a more creditworthy borrower than the U.S. Rather, it's a direct reflection of the weakness the bond market sees in the German economy, which is weak enough that it's an open question whether they are right now, today, in recession.

Similarly, when we look across the Pacific at Japan and see the negative rates they've been mired in for the past five years, that's not because bond investors are looking at Japan as being strong. It's because for the past 15 years, despite trying every trick under the sun to generate some economic growth, Japan has been unable to muster any.

This is a crucial distinction: Through the personal lens lower rates are always a reflection of strength, whereas through the national lens lower rates are often a reflection of weakness. There is an element of creditworthiness baked into the interest rates charged various countries, which is what makes these tweets plausible on the surface (and which makes this topic confusing and hard to pin down for individuals). So Zimbabwe is always going to pay higher rates than the U.S.

But the more important factor, at least among the major developed nations where default is viewed as a low risk, is economic growth potential. European and Japanese bond yields are negative because the prospects of economic growth are so poor. The reason U.S. Treasury bonds still have slightly positive yields is because our economy is one of the few still growing, not because our creditworthiness is inferior.

Let me re-phrase this a different way. If U.S. Treasury yields do turn negative, it will be profoundly bad news, because it will likely mean the bond market is convinced a recession is close at hand. With flat or negative growth on the horizon, the threat of inflation basically disappears, which is a huge part of getting bond investors to accept paltry interest rates.

President Trump's secondary point about the U.S. refinancing its debt at lower yields is a reasonable one, but also threatens to be confusing to many.

Again, we run into the difference between thinking as an individual (or business) vs. a sovereign nation. As an individual, if rates go down you can easily refinance your mortgage at the lower rate. In actuality, you are taking a new loan out, part of which pays off the old loan. Crucially, this is possible because the original mortgage allows for it to be pre-paid, including in its entirety.

But U.S. Treasury bonds are not callable in the way most home mortgage loans are. We can't simply replace existing debt with lower-interest new debt. What the government can do, and which would probably be smart to do, is to skew its issuance of new debt to longer maturities. This way, as existing debt (U.S. Treasury Bonds) comes due and is retired, it would be replaced by longer-term debt at today's lower interest rates. This would lock in these low rates for longer periods of time. There's little doubt in my mind that the U.S. could issue even longer-term debt than the 30-year Treasury bonds that are currently the longest-dated debt being issued (50- or 100-year bonds anyone?).

Of course, this isn't totally risk-free. Most people assume that these seemingly crazy-low interest rates are going to be a short-term phenomenon that we'll look back on with wonder in the same way we today view the 15%-20% interest rates of 35-40 years ago. But locking in new 30-year debt at today's seemingly rock-bottom rate of 2.20% won't look so smart if the U.S. does follow the path of Japan and Europe to zero or negative rates in the years ahead.

Federal Reserve interest-rate cuts usually provide at least some short-term boost to the financial markets and economy. So a president facing re-election is always going to be in favor of falling interest rates in the months leading up to that election. That's likely a factor in these types of statements. But it's not as if there aren't other factors too. Relative interest rates between countries impact currency valuations, which in turn influence the relative attractive/unattractive-ness of a country's exports, which influences the financial health of a country's manufacturing/business, which is all obviously stuff Trump cares about too! Some of these economic topics are a bit like the proverbial thread — once you start pulling, you realize it's connected to everything else. So I'm not trying to make any broader point beyond hopefully making this complicated subject a bit more understandable.

If there's one big take-away here it's simply that there's usually a strong relationship between a country's growth rate, it's inflation rate, and the interest rates the bond market establishes for its longer-term debt. In the case of Europe and Japan, there is virtually zero economic growth currently, they are more concerned about deflation than inflation, and their longer-term debt has negative yields. The U.S. economy, in contrast, has been growing recently at about 2%, our "official" inflation is a bit below that in the 1.5% range, and our longer-term (10-30 year) debt has recently been trading in a similar 1.5%-2.0% range. It's not as simple as the Fed just deciding what long-term interest rate it wants — there are some pretty well established relationships that dictate a lot of this.

As always, this isn't everything there is to know about the subject. Rather, it's the basics of what you need to know. Yes, the fact that other countries have such pitiful bond yields has an impact on U.S. debt as global investors pile into the last positive yielding bonds available, pushing those yields lower than they would likely be otherwise. But big picture, if you see yields rising in the months ahead, that's good news — it means the prospects for U.S. growth (and avoiding recession) are improving. If bond yields are falling, that's probably bad news (despite today's tweets), because it likely means the bond market is taking a dimmer view of U.S. growth prospects and a growing risk of recession.

One final thought: For decades, one of the primary negatives associated with investing in gold is "it doesn't earn anything." In other words, gold's yield is zero. In a world of negative bond yields, a zero yield looks increasingly appealing.