Improve the Return on Your Savings With a “CD Ladder”

Looking for higher interest rates for your savings? Join the club. Rates on savings continue to scrape the bottom of the barrel. Even with the Federal Reserve announcing in December its first interest rate hike since the end of 2008, it’s anybody’s guess as to when savers will really start to benefit.

When the Fed acted, it also signaled its expectation to raise rates four more times in 2016. But the stock market’s rough start to the year, coupled with growing concerns about the fragility of the economy, have many observers now expecting few — if any — increases this year. What’s a saver to do?

Use a ladder to raise your rate

One way to get more earnings out of your savings is to construct a “savings ladder” with certificates of deposit (CDs) issued by banks and credit unions.

CDs are investments in which you act as a creditor, lending your money to a financial institution in return for interest payments based on a fixed rate of interest. CDs however, unlike regular savings and money-market accounts, require that you not withdraw your money for a predetermined period of time. The longer the holding period, the higher the rate you will earn. If you withdraw your money before a CD reaches maturity, you’ll forfeit a portion of your earnings as a penalty for the early withdrawal. 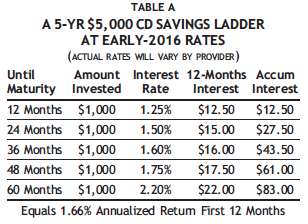 When rates are high and likely to fall

CD ladders can be used successfully whether interest rates are high or low. In a high-rate environment, it may be best to invest all at once in certificates of varying maturity lengths, enabling you to maintain some liquidity while taking advantage of the highest rates available on longer-term CDs.

Let’s say you wanted to build a CD ladder with $5,000. You might put $1,000 in a 12-month CD, $1,000 in a 24-month CD, $1,000 in a 36-month CD, and so on. This way, a portion of your savings will come available every 12 months. As each CD matures, it can be reinvested in a new CD of the longest-term of the ladder. After four years, all of your CDs will have five-year maturity dates, but one will mature each year. The five-year terms will give you the highest interest rate currently available, while the ladder’s staggered maturities help provide ongoing liquidity. 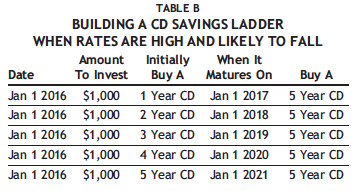 When interest rates are falling, weighting your holdings toward longer-term CDs is a wise approach. “Extending your maturities,” as this strategy is called, allows you to lock-in higher rates for an extended period of time.

When rates are low and likely to rise

However, in the current environment, with extremely low rates that seemingly have nowhere to go but up, it will likely be more advantageous to weight your holdings toward the shorter end of the spectrum (“shortening your maturities”). This will allow you to reinvest at better rates more quickly should they become available.

With this second approach, you invest over time in certificates of the same or similar maturity lengths. Just as with the first approach, you maintain liquidity, but you also position yourself to take advantage of rising rates. 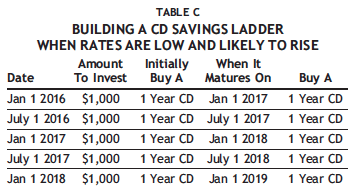 For example, you could put $1,000 into a one-year CD, keeping the balance in a high-interest online bank savings account (one year is currently the shortest CD maturity that earns a higher rate than online bank savings accounts, otherwise even shorter terms would make sense). Then, every six months, you could invest another $1,000 in a new one-year CD until your full $5,000 is invested, as shown Table C. As each CD matures, you would reinvest in another one-year CD. The hope is that each of these new one-year CDs would have a higher interest rate than the last, due to rising interest rates.

Naturally, you can vary this approach to meet your needs. You might spread your investments over more or less time, depending on how quickly rates seem to be increasing and whether you want to have more ready access to a portion of your savings.

To find the best CD rates, shop around. Many savers invest in CDs from a local bank or credit union without ever checking the rates of non-local institutions. By shopping online, you will likely find better rates from financial institutions outside your local area, and your funds will still be FDIC insured. Also consider Christian Community Credit Union, which currently is offering a 4% 18-month CD for new members with a maximum $2,500 investment. Funds are insured by ASI, a private insurer.

Managing a CD ladder does require some work. However, that small extra effort should translate over time into higher overall interest rates with little additional risk.

08/22/14 | Comments
Do EE Savings Bonds Have Any Redeeming Value?
By Matt Bell